Nate travels through UBC in Vancouver discovering amazing research projects and beautiful art, finishing up with a ride on the Mondo Spider.

This is a very large recap of my tour of Vancouver. Back at Maker Faire 2009 a gentleman came up to our booth and showed us his amazing cape costume using LEDs and LilyPad parts. I was really impressed so we gave him a SparkFun T-shirt and thanked him for all the great work he had done. It's amazing what such a simple connection can turn into! 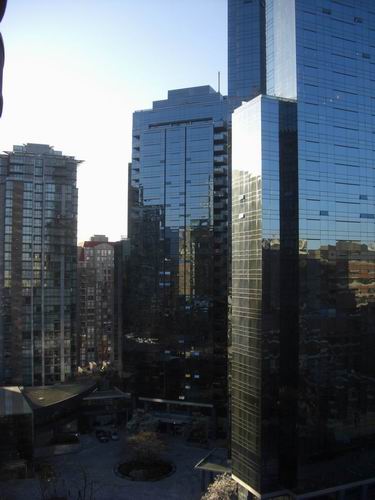 Bruce Lau is a prolific costume builder, hacker, electronic bicyclist, and engineer. Among his many pursuits, Bruce co-founded Zaber Technologies, a highly technical and advanced linear actuator and stepper motor control company. I really don't know how I get myself into these amazing situations, but from this chance meeting at Maker Faire, Bruce recommended me to Jon Nakane at the University of British Columbia. 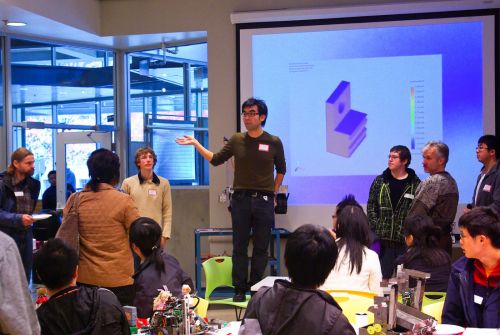 Dr. Nakane happened to be the lab director for the Engineering Physics Project lab at UBC (they call themselves 'fizzers'). He was looking for guest speakers for the end of semester project fair and invited me out to UBC in Vancouver to speak on engineering and entrepreneurialism. I then spent two days bombing around Vancouver with Jon and Bruce visiting various labs, shops and eating great food. I can't thank them enough. Here are some of the projects and encounters I came across: 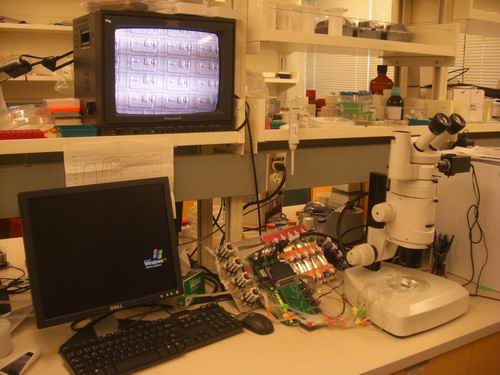 One of Jon's students from years previous (undergrad turned grad student) by the name of Tim Leaver took us on a tour of the microfluidics lab at UBC. I had no idea such a thing existed! Let me try to describe what you are seeing in the photo (I should have taken so many more!): Imagine a flexible polymer with channels in it. Stack another polymer layer on top with a thin layer in between channels. If you pump some fluid into one of the channels, it will expand, pushing up on the layer above it. This expansion cuts off a channel stacked above it - basically forming a gate! On the monitor, you can see a dozen of these gates. The slide under the microscope was the size of a quarter and had hundreds of gates.

What can they do with this? The gates and channels are roughly on the scale of human cells. By pumping cells into the channels and controlling the actuators with Labview and a gaggle of actuators, individual cells can be isolated and analyzed. Using different biological techniques, they can amplify DNA and perform tests for genetic defects, cancers or other conditions. Working on this small scale, hundreds of single cells can be analyzed at a low cost and in a short amount of time. Why study single cells? As it turns out, up until now biologists have looked at bulk samples of cells, and assumed they are all similar (all the cells from a cancer tumor for example). As it turns out, this is not the case, and so new techniques like this will help them see what is going on a finer scale. 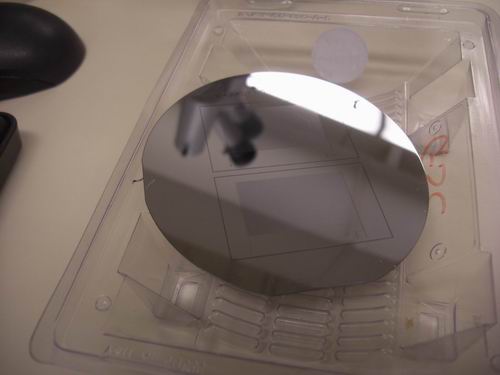 Tim then took us into the clean room (bunny suits!) where he showed us how they made the slides. Using technology wafer fabrication techniques from the 1960s, silicon wafers were etched with lithography to create the molds. 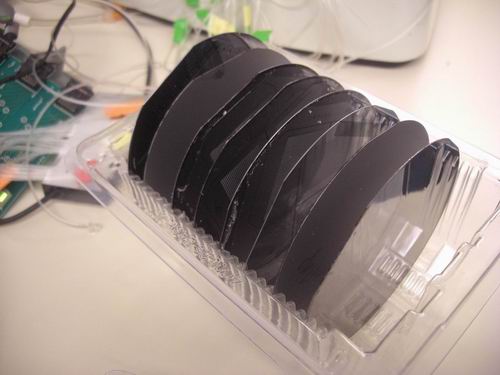 They are even experimenting with multi-layer polymers - meaning, instead of a two layer channel system, they are getting up to five. This requires the ability to move fluid between layers. How do we do this in electronics on PCBs? With vias of course and that's precisely what they are doing! Except with a much more powerful fluorine laser (scary stuff fluorine). They carefully map the X/Y coordinates of the slide and 'burn' a small hole or via in the polymer. It was amazing stuff and the analogy to electronics and PCBs was surprising. 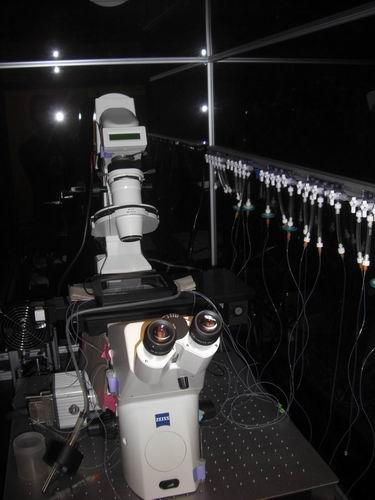 Above is a picture of a controlled temperature reaction chamber where they were studying the development of hundreds of individual cells over the period of a few days. Using some serious automation, the system is designed to take a photograph every half hour of every cell! The variance in the temperature within the lab was causing a few microns of change in the rig causing the images to go out of focus. They are experimenting with computer vision algorithms to trying to correct for the deficiencies. So many great toys - I was extremely impressed and a little jealous that they get to play (hack with a whole lot of brains) at such a cutting edge. 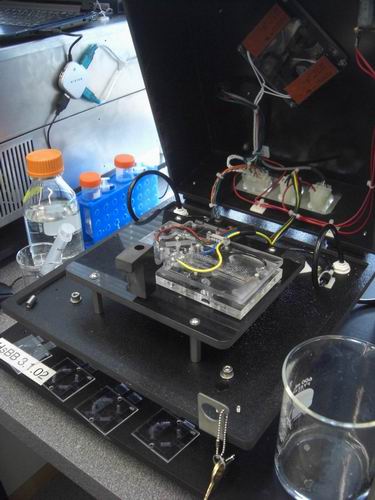 Along the tour of many awesome labs (wind tunnels, huge open engineering spaces), we stopped by Boreal Genomics. Again, not nearly enough photos, but what you see is a dish in the middle of the machine with four platinum electrodes. I'm simplifying a lot here, but a normal molecule, when excited by an electric field, will travel through a polymer gel with a known speed. The molecule has drag based on its size and shape. But DNA is weird. Depending on how it is compressed or strained, it has two different amounts of drag.

So what? Using this interesting non-linear drag coefficient of DNA, Boreal Genomics figured out by exposing DNA to an electric field, then rotating that electric field, you could concentrate DNA. Not only could you concentrate it, but separate it from impurities as well! You can literally take dirt, suspend it in a fluid, put a few milliliters into the machine and concentrate the DNA to a dot and all the dirt gets pushed to the side. It was truly amazing to see. The machine used an ARM7 for control and about 100V per centimeter electric field. The biggest problem at the moment is cooling the plate (with a peltier plate and heat sink) to keep the polymer from boiling off.

Boreal Genomics was founded by Dr. Andre Marziali. Dr. Marziali was the other guest speaker at the UBC physics presentation. His talk was the ying and yang to SparkFun. Where SparkFun started with a little debt, a bunch of inventory, and a rough business plan, Dr. Marziali had a large amount of patented IP, grants from all sorts of agencies, and a big up-hill battle to development a complex cutting edge machine. He is making large advancements daily and is already producing machines (upwards of $50,000 per machine). UBC is churning out some amazing scientists.

We completed the tour with a review of the amazing student projects including "Limitations of data transfer across SOI racetrack resonators" and "Development of a new polydispersity analysis to allow bacterial detection in platelet transfusions". Why was I invited to speak at this event again? I am not nearly a good enough engineer to stand toe to toe with these folks!

If you'd like to check it out, the slides are available here (5MB!). The PDF doesn't quite do it justice but you might enjoy looking at some of the charts and images. My presentation went extremely well and the audience of ~60 people seemed to really enjoy it. I very much enjoyed talking to Dan Gelbart from Creo. He had some wonderful feedback for me about growing SparkFun sensibly. 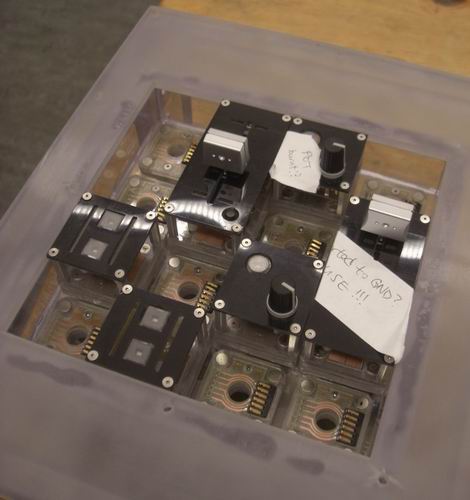 This was one of Jon's students' (Derek, William, and Aaron) re-configurable MIDI interfaces. Using magnets and some compressible connectors (commonly used behind rechargeable battery packs) the interface (sliders, buttons, knobs) could be quickly moved. Neat idea, beautiful implementation, and they claimed they built it within a semester. I can't do anything inside 4 months! 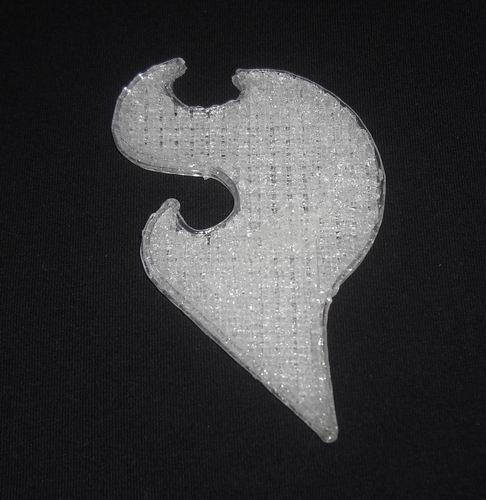 For presenting, I was given a SparkFun flame 3D printed on one of the student's RepRap machines. So cool! 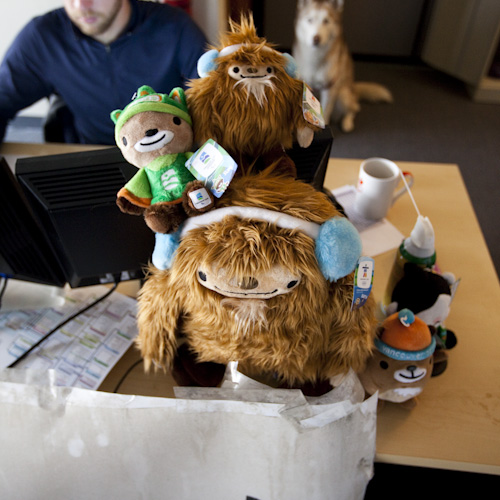 From another connection to SparkFun, Aki Mimoto (one of the public figures attending the talk) gave me a bag of mascot animals from the Olympics. These were a gift to the SparkFun IT and support folks who hang out on our IRC channel. Aki - you rock! Thanks a ton for this great gift. 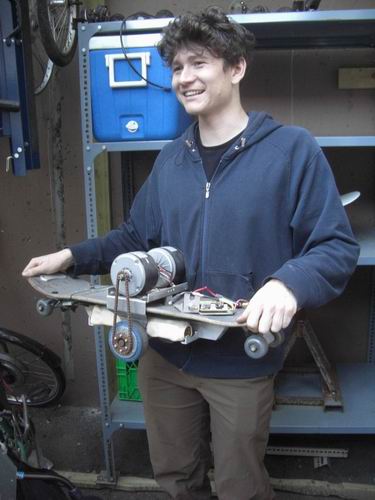 The following day took me into the greater Vancouver area. I got a tour of EBikes.ca from Justin Lemire-Elmore, the founder (and graduate from the Eng Physics department). He had an amazing story that resonates completely with SparkFun. Finding a frustrating void in the electronic bicycle market, Justin set out to engineer solutions. He's found partners to work with, import parts, and design their own products. When tooling was cost prohibitive, he and his team figured out how to modify off-the-shelf enclosures. When parts started failing, Justin created an ingenious testing apparatus to verify each vendor. Justin is holding his self-balancing skateboard.

Next up was a trip to the local electronics store. David Carne (designer of such products as the FPGA development board) is an old SparkFun employee that relocated to Vancouver. He took us to Lee's Electronics a few doors down from EBikes. In this small world, I ran into Raymond (the owner) who happens to be a SparkFun distributor as well! We spent a good two hours just browsing, shopping, and talking with Raymond about all the different electronics parts and market challenges.

Of course no tour of Vancouver would be complete without lots of pictures! 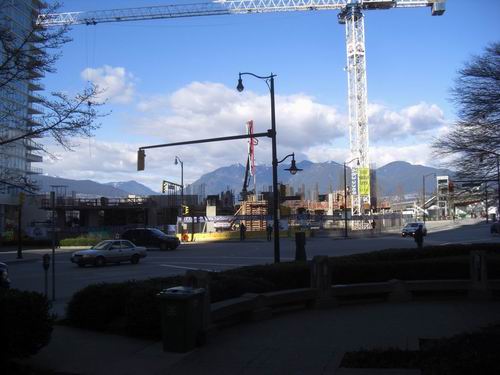 Construction near the Olympic torch. 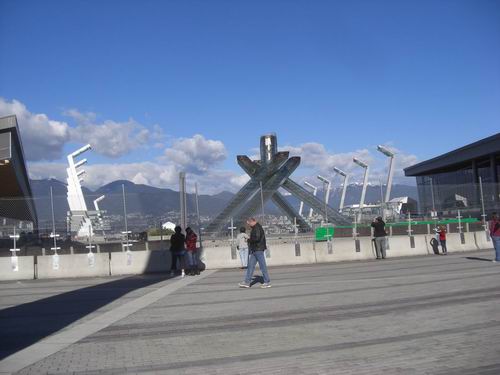 The Winter Olympics had just completed before I arrived. It was great to see the city come alive for the world. 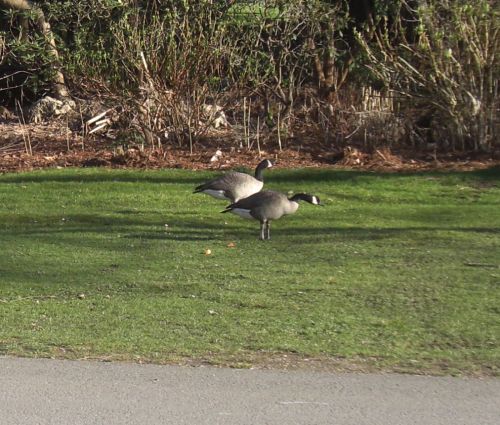 Canadian geese. There's got to be a joke in there somewhere. 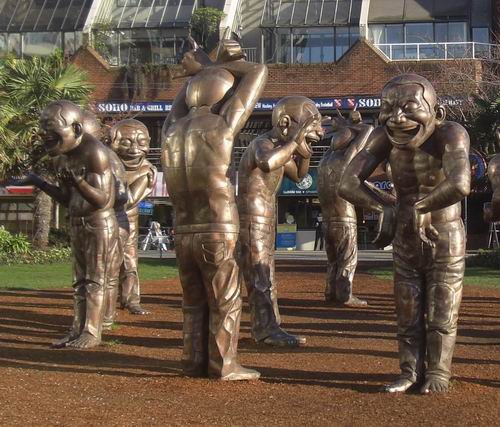 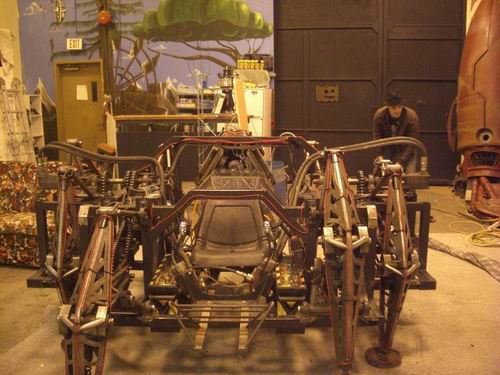 I watched the Mondo Spider walk down a dusty street in the middle of the night at Burning Man 2009. Watching it cruise by, I was blown away with what I saw, not fully comprehending what was in front of me. 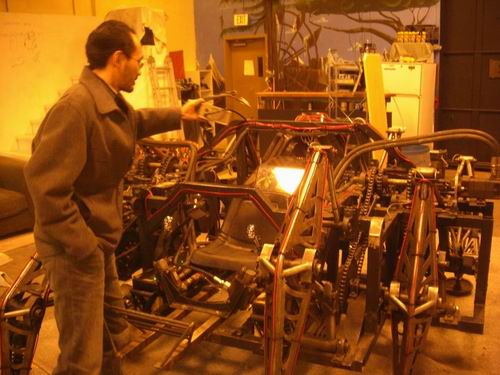 Late on Friday night, out of shear coincidence, I found myself standing in front of this beast with Bruce and Eliza at the eatART studio. 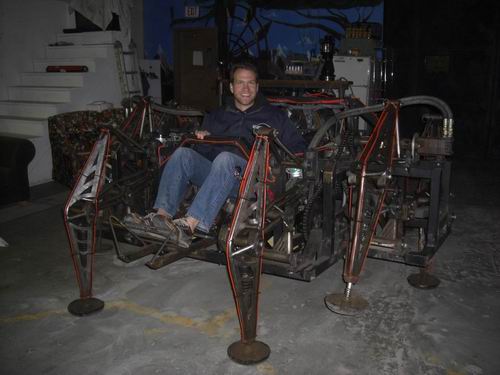 If it looks like I'm a giddy fool, that's just because I am. This was an amazing beast! Bruce had been one of the original builders of Mondo Spider along with a team of welders, builders, and supporters. Leigh (who runs eatART) asked if I wanted to take Mondo Spider for a drive. I could barely contain myself! Just an FYI - it does have a functioning drink holder. 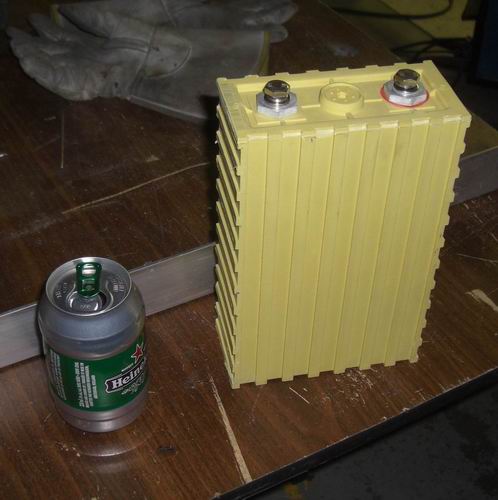 Mondo Spider is a fully electric vehicle that sounds like a whirring jet engine when the hydraulic compressors spin up. This is one of 16 Lithium Iron Phosphate cells that runs Mondo Spider. I'm told it's 3.3V and 75Ahr!

Vancouver was amazing. I cannot thank Jon, Bruce, and all my new friends for their hospitality! I hope to see them all again soon.

All Over the Place

Which Arduino Do You Need?