Check out the new ArduPilot Mega - for all your autonomous needs!

This powerhouse of a circuit board will knock your socks off! In fact, one might assume that Mighty Mouse is manning the cockpit of your UAV (Unmanned Aerial Vehicle). Here comes ArduPilot Mega to save the day! Designed by Chris Anderson (Wired Magazine's Editor-in-Chief) and Jordi Muñoz of DIY Drones, this product is so awesome it deserves its very own homepage post.

Check out the insane amount of IOs - booya!

First off, this beast uses the new ATMega1280, giving you tons of additional processing power and 54 pins of IO madness. This means you can connect many more sensors and control up to eight servos. Like its smaller cousin, it still has a failsafe feature controlled by the onboard ATMega328. This allows you to manually override the autopilot, maintaining control via your RC transmitter. The ATMega328 comes pre-programmed with the failsafe firmware. The ATMega1280 comes with the Arduino Mega bootloader, allowing you to tweak the code to your liking using the free Arduino software and our FTDI basic. 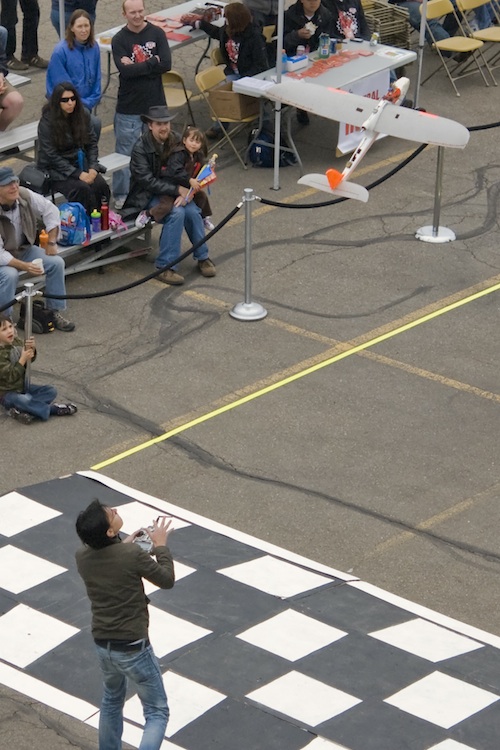 Jordi and his DIY Drones UAV at the 2010 Autonomous Vehicle Competition. This plane was running the previous version of the ArduPilot. Look Ma...no hands!

The autopilot handles both stabilization and navigation, eliminating the need for a separate stabilization system. It also supports a "fly-by-wire" mode that can stabilize an aircraft when flying manually under RC control, making it easier and safer to fly. The hardware and software are all open source. The board comes with all the surface-mount parts already soldered, but requires the user to solder on connectors. Other necessary elements, including aircraft recommendations, can be found at the project's home page.

This is an exciting product for anyone interested in steppin up their autonomous vehicle game. ArduPilot Mega is the greatest wingman you could ask for...think Goose in IC form.
View Comments (17)
Share
Use this URL to share:

This Project Is Just a Roll of the Dice