Nate and Juan head to Denmark to check out hacker spaces, Malmoe, and Copenhagen Suborbitals

If you've been following our Flickr feed, you may have noticed some amazing photos that Juan has been posting over the last week. The SparkFun gang just returned from a 6 day stint in Copenhagen, Denmark. It was a fantastic trip and wanted to share some of the stories and photos. Get ready, I stole Juan's compact flash card and snagged all the photos he took from the trip. So these are not really touched up or edited, but they help tell the story.

Our goal for the trip to Copenhagen was to capture Kristian and Peter from Copenhagen Suborbitals for a photo shoot plus a video. Little did we know the trip would turn into so much more! We know Vanessa and Dzl from the photoshoot we did in Las Vegas last year. Vanessa was the originator of the Critical Corset and Dzl brought her idea to life. Vanessa was kind enough to invite us to stay on the Illutron barge! How could we pass up an opportunity like that! Illutron is a collaborative art studio based on a barge in one of the harbors of Copenhagen. It's an amazing place! Just the feel of the large machinery combined with the undertones of art causes one to begin to dream up interesting projects. This is Jessica Grenier (professional photographer), Sam Miller (videographer from The Rehab), myself, and Troels. Troels is part of the Illutron group and was nice enough to give us a tour of the barge and of the city itself. Super nice guy! Everyone was so kind to us. In the picture we're standing in the upper viewing deck (as seen in the upper right corner of the first picture). The ship was huge. Here is one of the lower compartments of the ship during one of the hacker meetup evenings. Mona, Christian, myself, and another 15 or so attendees hung out for many hours learning to solder, discuss problems ("How do I control a car's head lights from an Arduino?"), hack on things, and generally learn from each other. It was fantastic to meet people from all over the world and learn about their projects. From just powering an LED to designing rocket control systems, we were all over the technical map but we all shared the same excitement and passion for what we were doing. It was indescribably fun. Copenhagen proper. I heard nearly 30% of people commute via bike. There are a lot of bikes in Boulder, Colorado. We have nothing compared to Copenhagen. It was astounding how many people were on bikes, and how easily the city made it to get around via bike. What is Danish like? Take a look. Værtsdatahastigheder. Yep. It has something to do with communication speed (38400bps is a common serial data rate). One of the first things we noticed was the graffiti. Not normal graffiti, this was impressively creative, colorful, professional, and on nearly every surface imaginable. We enjoyed how much it added to the barren walls in parts of the city. Tony Olsson's bike from 1scale1 in Sweden. Don't sit still too long or you yourself might get tagged. Did I mention Tony co-wrote one of the greatest wearable electronics books, and it's open-source? Checkout Softwear. On Monday we drove 30 minutes across the Øresund Bridge to Malmö, Sweden. David Cuartielles (of Blushing Boy and Arduino fame) showing us around the interaction design program at Malmö University. I was exuding envy as we walked through the amazingly lit, large open spaces. Quite the change from the 2nd basement of the engineering building where I did my EE studies. No tour would be complete without walking over to the Turning Torso building. Amazing. 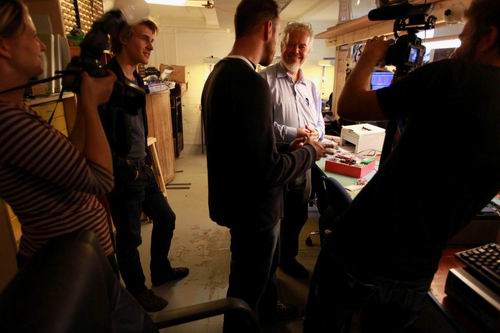 Back in Copenhagen on Tuesday, Johan took us on a tour of a the local hacker space called Labitat. Countless projects and happy creators. 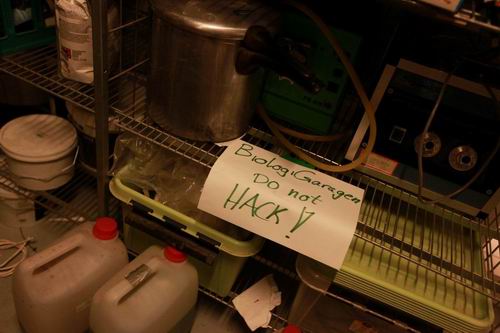 In a hacker space, you never know when or what may be hacked. It's best to leave notes. 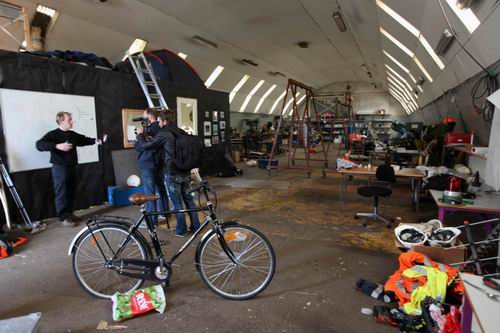 On Thursday we made our way to the Copenhagen Suborbitals hanger where Peter met us with a huge smile and a warm welcome into their shop. We couldn't see the actual rocket because it was still out at the launch port off the coast, but Thomas Scherrer (the RF guru of the Suborbitals team) was kind enough to show us many pictures and videos from the launch attempt on September 5th. Kristian von Bengtson on the left and Peter Madsen on the right. They're hanging out on the mock-up space craft used to practice the recovery procedures at sea. We had a fantastic time exploring Copenhagen. Rain can be a good thing sometimes. And just a quick 18 hour jaunt to get back to Colorado. For more amazing photos, check out our Flickr feed.

Christian Liljedahl, Troels Christoffersen, Vanessa Carpenter, Peter and Kristian, Thomas Scherrer, David Cuartielles, and many many others, I cannot thank you enough for this great trip. Thank you so much! You're always welcome at SparkFun.

Modkit and the Kickstarter Campaign

Let there be light!