Modkit and the Kickstarter Campaign

We're suckers for creative ideas that will help bring new people to the world of physical computing. So when we heard about Modkit we were all over it! In their own words:

In our own words: it's awesome! Newcomers can tend to be discourage when it comes to learning code. Learning a language, syntax and how to understand compiler errors can be a frustrating endeavour, even if you're using a platform like Arduino. Modkit has attempted to ease these frustrations by creating a web-based graphical programming environment for Arduino. The interface makes programming as easy as dragging and dropping. By using built-in programming 'blocks' users literally build their code by dragging blocks into a programming window. 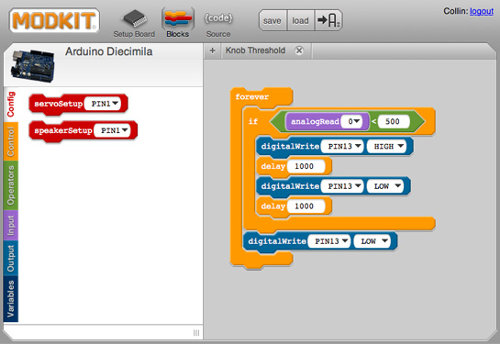 Modkit can be used to program Arduino, and they're working to integrate different shields into the included code blocks. SparkFun will be selling a Modkit Board soon too, which is an Arduino Shield with a motor driver, a header for a 16x2 LCD, and a clever new way to attach analog sensors or I/O using Audio Jacks. The Modkit board will be supported by the Modkit IDE and is a great way to introduce students (or any beginner, really) to programming, especially robotics.

The creators of Modkit are currently searching for funding. They've created a kickstarter campaign to reach their goal, inviting the greater community to help them get their project off the ground. Certain rewards are offered for different sized pledges. If you're a hardware maker and you think that your design would be a good addition to the Modkit IDE, you can even make a pledge and they will add your board to the interface (like we did with the Modkit board).

We think Modkit is a great idea coming from great people. If you have time check out their website and see what they're trying to do. If you think that you or someone you know may benefit if the idea is realized, make a pledge!