New Tutorials For the Week

We show you how to program standalone ATmegas and introduce a new Arduino library to make using LED matrices easy!

Today we have two tutorials to get your week off on the right foot. First we have a tutorial on Using an Arduino to Program an AVR. The second tutorial goes through Controlling RGB Matrices with Arduino. 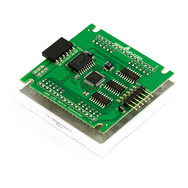 Many of the products SparkFun sells use an AVR, like an ATmega168 or an ATmega328, as a microprocessor. We like these processors for many reasons, one of which is that they are used in Arduino. Of course, just because a board features an ATmega, does not mean it is an Arduino. Fortunately, it does mean that the same code you use on your Arduino can be used on a standalone ATmega! This tutorial will show you how you can use an Arduino to program your standalone ATmegas!

Our RGB LED Matrices have been used in some awesome projects to date, but we think we have really only seen the tip of the iceberg. If you are interested in using these boards, but have been turned away because of the task of linking multiple boards together, we have the perfect tutorial! This tutorial explores a new Arduino library we've created that will allow you to easily link multiple RGB Matrices together! We explain the functions of the library and how to use it to make your own matrix-based display!