My fellow mole people: greetings to you all. So the world has chugged down another Free Day, for better or worse. And as we begin our recovery (hey, it was a ton of work to coordinate that thing), we set our sites on the next big event on the SFE calendar. And what's that? You guessed it, dudes! It's AVC 2011!!! 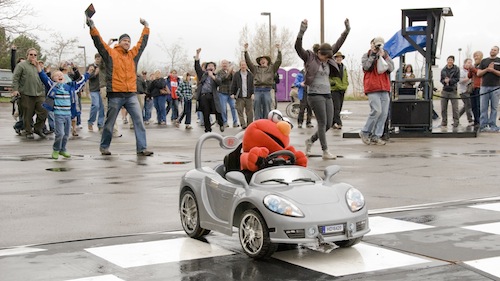 The thrill of victory - or at least a nice solid job by Elmo.

For the uninitiated, let me explain. “AVC” is short for “Autonomous Vehicle Competition”, and this is our third time hosting this event. People come to SparkFun Command Central here in sunny Boulder, Colorado to try their luck at navigating around our building with an autonomous vehicle of their own design. You can do it by land, or you can do it by air. (I'd avoid the sea bit; the pond doesn't go all the way around the building, and I think something pretty foul resides in there). This year's event will be held on Saturday, April 23. Doors open at 8:30, races start at 9:30 sharp and we will go to around 5 when we present awards.

If you're a veteran of previous AVC's, check the rules carefully as there have been a few adjustments for this year. Last year we had a lot of people actually complete the course. And while on one hand we'll say kudos to you guys for making it, on the other we're saying that this is getting too easy, so we're going to throw in a monkey wrench or two. We're also going to open up the ground vehicle category to, dare I say, an unlimited number of entrants... OK, that one's got me a little concerned. If we get a hundred ground entrants this could get interesting, but for now we're going to say "the more, the merrier". 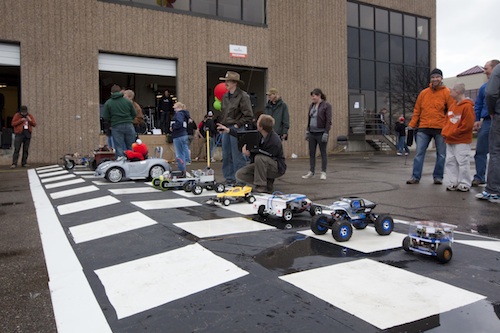 We just love doing this event, and we're totally stoked for this year. It's all the robotics you can cram into a 1/10th scale RC car chassis. Or, for the more adventurous, your own chassis design... or even toss something in the air! Add to that some good times with good company, good music from the house band, food vendors... I don't know, there might be minstrels, and maybe a guy walking around on stilts. OK, probably not those last two, but you really can't go wrong coming to this event. Come get your geek on!