The IOIO and Android Based Hardware

The current state of the IOIO and other Android related hardware.

In the past few months, there has been some significant action in the Google Android open hardware movement. We are very thankful and excited to take part in all of the fun. This post will talk about the current state of the SparkFun IOIO, but more specifically how it compares and contrasts to the new Arduino based hardware Google recently released called ADK (Android Open Accessory Development Kit) and its supporting Open Accessory protocol. 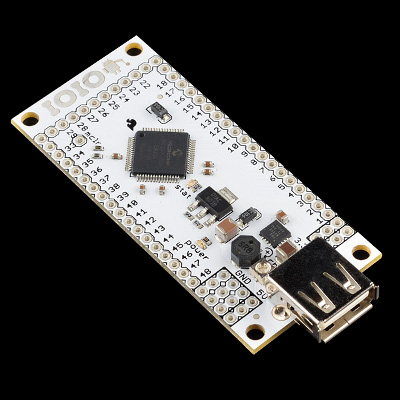 The IOIO (pronounced "yo-yo") is a board specially designed to work with your Android device. 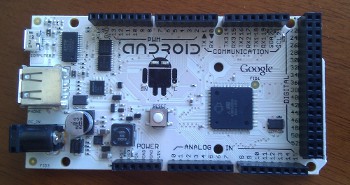 Google's ADK board released at the Google I/O 2011 developer conference.

What is the difference between ADB and Open Accessory? Ytai Ben-tsvi, designer of the IOIO hardware and software, has written a very good summary comparing and contrasting the ADB and Open Accessory protocols, both of which have positive and negative attributes. I encourage you all to peruse Ytai's blog post for more detailed software information.

What does all of this mean for you (the consumer)? Well, this means Google, the IOIO, and Android peripheral hardware is starting to standardize, so that a rock solid community can be developed where people can share their projects and apps. This is all great news, now all you have to decide is which hardware platform suits you best.

For most users, the hardware involved with both the IOIO and other ADK based boards accomplishes the same thing in the end. You write an app for your Android and it will control a peripheral device (motor, sensor, etc.).

The IOIO uses a high level Java API that allows you to write an app for your Android and never have to mess with embedded programming (i.e., all of the communication to and from the Android is handled behind the scenes on the PIC microcontroller). For example, to output PWM on a pin on the IOIO all you need to do within your app is create and instance of the object 'PwmOutput', then define the pin number and frequency, very simple.

The newly released Google hardware (ADK), allows you to potentially do the exact same thing. Although, it is necessary to create your own API by programming the on-board ATmega microcontroller in Arduino, in addition to writing your Java app. While this approach does give more flexibility for users wanting to create their own communication protocol (which can be difficult), the extra step of programming the microcontroller in C++ and your app in Java is somewhat cumbersome for development and testing. Once the community is set, I anticipate that higher level APIs will be written for ADK boards so that the microcontroller can be transparent, much like the IOIO.

A huge benefit to using ADK/Arduino based boards is that the hardware is based on existing Arduino boards. This means all of the shields and participating products relating to Arduino should, in theory, all work with ADK. However, the resulting ADK hardware requires the ATmega microcontroller, a USB host chip with connector, USB slave chip with connector, and a footprint to match an Arduino. These requirements add to size and cost. In addition, you may have to use two different IDEs, as well as, writing in two different programming languages: Arduino (C++) and Java.

A huge benefit to using the IOIO is that it is small, simple, and inexpensive. The IOIO only contains a single USB enabled microcontroller and a USB host connector. From its inception, there was a high level API written, and therefore the microcontroller is transparent. All you have to worry about is programming your Android app. However, the board does lack the flexibility of using existing hardware (no shields as of yet) and creating your own API by programming in Arduino. Although, if you still want to create your own API and write custom firmware for the PIC on the IOIO, there is a tool that allows you to to bundle your firmware inside the Android application. This way you can have the firmware installed automatically once connected, and will no longer need a PIC programmer.

There are some other hardware platforms out there that I have not mentioned like the Microchip Accessory Development Kit, the Arduino/USB Host shield combo, and a few others, but these are more similar to the ADK than to the IOIO in that there is not an easy to use high level API written just yet.

As you can tell, the IOIO and ADK are still in their infancy with much progress to be made both in hardware and software. We are only getting our feet wet at this point in time, and hope to support additional hardware in the future. If anyone has had any experience with either platform please let us know how your hacking went. We would love to get your feedback!

For more information on the IOIO, please join the discussion group.