The lengths we go to for our pets...

If there's one thing that the internet has taught us, it's that the 90% of the world's population loves watching videos of cats doing stupid and/or funny things. I actually think my Aunt Sarah thinks watching cat videos is what the internet was designed for...but I digress.

This SparkFun customer project will speak to all you pet owners out there with a cat that is a little finicky (what cat isn't?). In the above video, you'll see a cat that only will drink out of a running faucet. As you can imagine, the owners found this a little annoying when they had to turn on and off the sink every time kitty wanted to take a drink. Like any good SparkFunner, an opportunity was found and a project was born. 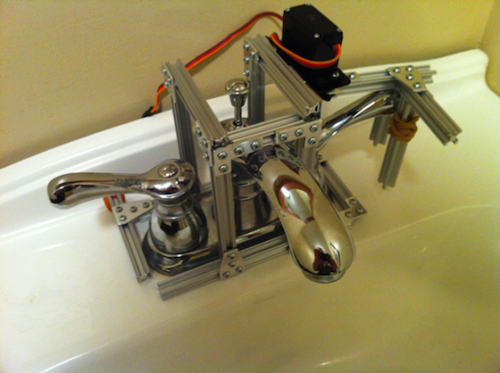 Using an IR sensor, metal frame work (similar to MakerBeam), an Arduino, servos, and some nice design work, Dillon built a nifty device that turns on the faucet when the cat jumps up on the sink and turns the faucet off when he leaves. The project wasn't without its problems (which are very well -documented on the project website), but ultimately the Automatic Cat Faucet works like a champ.

Check out the website for more pictures, code, and a well-documented build that will allow you to create your very own automatic faucet (or use the technology to cater to your pet's other idiosyncrasies). Nice work!