Wiring 1.0 has been released! Wiring has opened up prototyping with electronics to wider audiences by defining an extensible architecture for future hardware and software.

A quick order of business - this Friday, November 4th, there will be no orders shipped. We are counting all our stuff (AKA, a full inventory physical count). If you've already arranged a local pick-up for Friday, you should be alright but we will not be processing any new local pick-ups. Apologies for the inconvenience!

Announcement: Wiring 1.0 has been released!

This release is a milestone for open hardware. It is the sum of work and contributions from many, and the synthesis of ideas gathered and experimented in the last seven years. At the same time, it is also a start, as once again Wiring has opened up prototyping with electronics to wider audiences by defining an extensible architecture for future hardware, software and courseware; where novice, intermediate and experts will materialize their ideas, design and support for their new open hardware devices as well as develop applications unlocking new ways of thinking, and making, in an even simpler way. -Hernando Barragan

Sounds similar to Arduino, yes? Wiring and Arduino might be more closely related than you think. 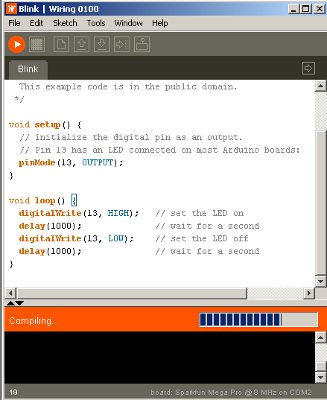 The Wiring IDE looks pretty much the same as the Arduino IDE and functions in the same way; sketches from each IDE can work on the other. Both environments are based on Processing, but what might surprise you is that Wiring was the original source for Arduino!

The really cool thing about Wiring is that the primary focus of the project is to create cross-platform framework for all types of microcontrollers. Wiring supports almost 80% of the Atmel megaAVRs with the v1.0 release and the version 1.1 release is slated to add support for AVR Xmega, AVR ATtiny, PIC32, ARM Cortex M3, and MSP430. Considering the compatibility and open nature between Arduino and Wiring, this opens up more doors to to different types of development hardware. 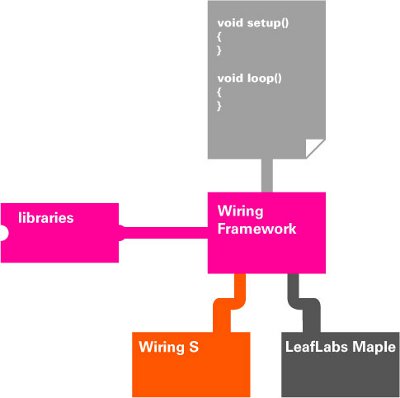 The interchangeability of Wiring can result in some interesting setups. For example, you might see someone using parts of an existing Arduino sketch, then using hardware specific Wiring libraries with the Wiring IDE to load code onto a LeafLabs Maple. Each piece of hardware (i.e. Arduino Uno, LeafLabs Maple, Mega Pro 3.3V, Wiring Board, Wiring S, etc.) will have it's own set of Wiring based libraries.

If you want to try Wiring, the software is free and it is very simple to get started. You can download everything here.

Also, if you have a microcontroller series that you’d like to see use the Wiring Framework, please contact: dev@wiring.org.co