A story about the recent additions to our growing family of manufacturing equipment.

Hey and welcome back, everyone! First thing's first: CAPTION CONTEST. You've been waiting so patiently, and the results are in! Congratulations Hardware.Panda, you're the winner of the "Hacker on the Go" wishlist! Let the wave of glory wash over you like a lead-free tide. 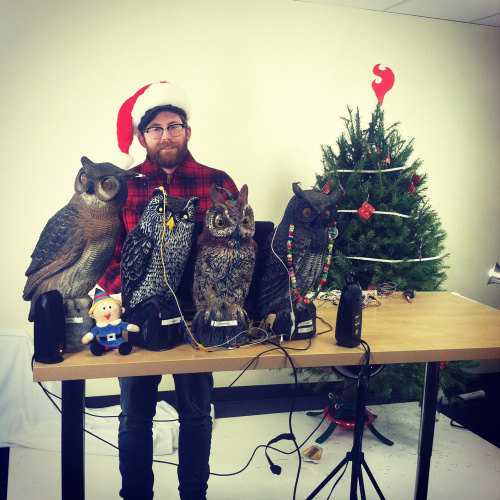 Now, at SparkFun, we have always prided ourselves on our ability to pull ourselves up by our bootstraps, discover solutions that resolve issues we face while staying within our means, and as a consequence, learn and grow through the experience...even if we stumble and fall a few times along the way. Well, this collectively shared value of ours still holds true today. And here is a story about a recent and ongoing educational experience in our Production operations that has pushed us to learn more about how to scale up our manufacturing capabilities while staying true to ourselves...

At the first of this year (not too long after Free Day v3.0), we began to see that our current dual-machine, two-shift pick-and-place operations were reaching, or were already at, max capacity. If you’ve only begun just recently following along with what we do here at SparkFun, we have been running two Manncorp MC38x pick-and-place machines for a little over 3 years now. These two assembly robots have been great investments for us and have no doubt done an excellent job meeting our PCB population needs. They have also been a great model to learn pick-and-place operations on at a pretty decent entry level price. 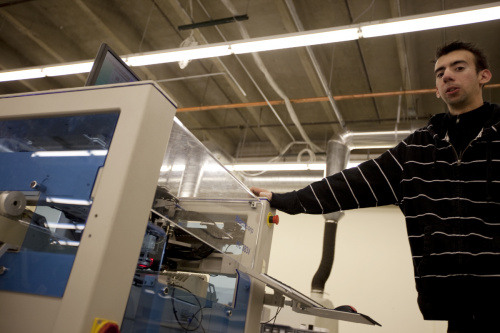 However, given the lower production capacity of these machines and our building’s space limitations, we had to make a decision between finding new equipment to help us beef up our output or adding a third shift of operation on our two machines. And because of the cultural impacts that we believe would inevitably accompany the addition of a third shift, we decided that new equipment was the direction that should be taken. It also didn’t hurt that we love exploring the use of new tools and equipment - challenges that excite us a good bit more than solving complex organizational and behavioral ones.

So our hunt for the next generation of SparkFun PCB assembly equipment began in earnest last March. Though we knew that component population speed was a critical factor we needed to get better at, we also recognized that the ability to more quickly change over from one production run setup to the next would likely give us the greatest boost in our pick-and-place operational output. After years of running lower-volume PCB assemblies of almost 400 different designs, we learned that rapid changeovers from one production run setup to the next were key to staying on top of a dynamic and ever-changing production schedule. After doing some of our own research and exploring the latest offerings at last spring’s IPC Expo in San Diego, it became quite clear which machine would deliver the results we were looking for...

We were first introduced to the MYDATA machines a couple of years ago and were blown away by the intelligence built into the design of their PCB assembling bots. For starters, their Agilis feeder system made so much sense to us the moment we saw it in action for the first time. It was a sort of “duh” moment for us. As in, "how have we lived without this all these years?!" The Agilis feeders use a small blade to peel back the clear tape on a component reel from the side, instead of requiring a machine operator to manually peel back the tape and tie it off to the feeder, a process which not only takes more time but also results in the unfortunate discarding of quite a few components which must either be populated by hand or discarded. 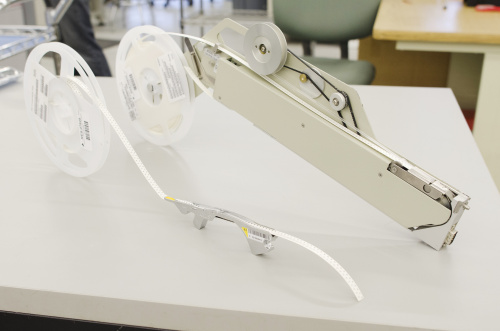 But what about that improved component placement speed that we were looking for? Well, you may have seen or heard about machines out there with multiple mountheads that work simultaneously together to pick up parts and place them on a stenciled PCB, or panel of PCBs. If you have two pick-and-place heads, you’ll double your speed, right? Yes, most likely...or at least you’ll get close to populating boards twice as fast. Even MYDATA builds & sells machines with dual mountheads. But stepping up to that amount of throughput capacity comes at a cost, one that is likely very easy to justify for extremely high volume contract manufacturers. Lucky for us, MYDATA also designed a version of their high volume machines for lighter volume PCB assemblers. Our MY100LXe has only one mounthead, but is still able to populate a board eight times faster than either of our current Manncorp machines. This is partially a result of the eight-nozzled HYDRA system on the machine that is able to pick up eight components in a single trip to the component feeder section of the machine, and then populate those eight parts in the blink of an eye on its return trip to where the PCBs are. (Check out the video below to see this lightning fast speed in action!) Granted, this system is typically used for the placement of passive parts (though there are many non-passives that it can handle); however, the majority of the parts on most of SparkFun’s board designs are passives.

Bob is now well versed in both Manncorp and MYDATA operations

Fun fact: the mounthead on our MYDATA machine has already traveled 291km (180.8mi) since we began using the machine back in August -- about the same distance as a roundtrip drive from Denver to Vail and back!

We’ve made it this far and I haven’t even mentioned the downtime reduction savings that can be realized on this machine, if it is managed well. During a production run, if a component feeder runs out of parts, the machine will automatically either begin to pull from that component’s secondary location on the machine or move on to other parts that it can place if there is no secondary location. While it has moved on to picking and placing other parts, a fresh and fully loaded feeder of that expired part can be placed onto the machine at any time and the software will recognize instantly that the part it had previously skipped is now “restocked” and available to be pulled from again. This on-the-fly feeder loading feature is what allows for such quick turnaround times between the completion of one assembly run and the start of the next.

A few more fun specs on our new MY100LXe: 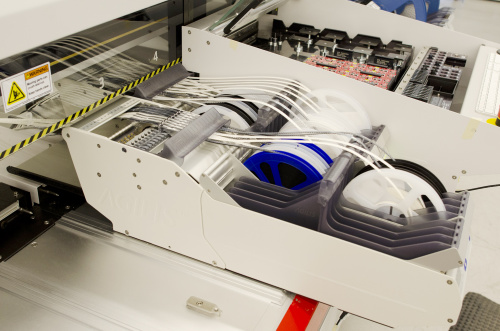 It probably goes without saying that we are extremely pumped to be working with such a beautiful piece of highly-tuned machinery these days, and are enjoying the challenges that come with integrating any new piece of equipment into our assembly process. All in all, this is a significant upgrade for us. Although this post may sound a bit more like a review of MYDATA machinery and, perhaps even a promo for them, the ultimate takeaway that I hope to have conveyed is that there is a time and a place for bootstrapped solutions, but that once a particular scale has been reached, the logistical challenges associated with that scale often have very good solutions already developed, and a great deal of support behind those solutions. Allowing ourselves to invest in a costlier but very efficient pick-and-place machine was a difficult decision for us because of our still scrappy mentality. But we’re still learning about how to meet the still growing demand for open-source electronic hardware, and this new machine allows us to grow and develop into a better version of ourselves. We may be a little older and a little wiser, but not to worry, we still keep the old “reflow oven” around so that we never forget our roots!

[tune in next week to hear about our current, ongoing transition from stenciling PCBs by hand to the introduction of our first ever stencil printer...]
View Comments (23)
Share
Use this URL to share:

New Product Friday: The End is Nigh