In July, SparkFun’s RV pointed east and headed out to do five workshops at four different museums in the Oklahoma Museum Network. We had talked to Sherry from the network and everyone was excited to teach basic programming and sensor concepts to a bunch of little dudes all over Oklahoma.

Video courtesy of Brent Weber at the Oklahoma Museum Network

Our cast of characters in the RV was comprised of Pamela Cortez, Chris Burton, our driver Dane DuHoffman and I. The museum network ordered a bunch of our elementary school level workshops so all the educators in the RV brushed up on Scratch drag and drop programming as well as our Pico Boards. After a quick stop at the supermarket to stock up on the essentials of beef jerky, water and chocolate, we hit the road and put a quick 700+ miles on the RV's odometer before rolling into Oklahoma City.

Our first stop was at the Great Plains Museum. You may think this is an unlikely spot for a SparkFun workshop since they specialize in the various cultures that have populated the American plains since 11,500 BC. But, once inside they eagerly showed us their bacon shaped tables, which will be the setting for their new Tinker Lab workshops. Apparently geeks live everywhere, even in history-based museums. Our new friend Jana helped us teach the kids about If statements, force pressure sensors, animation and microcontrollers. The afternoon flew by and kids were making noises and controlling characters using their Pico Board slider with relish when their parents showed up. After the class we strolled around the grounds a little, admiring their frontier cabin and train. 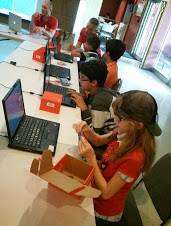 They were hard at work when their parents showed up

The next stop was the Science Museum Oklahoma, the central museum in the network. The second we stepped into this place we knew we were going to like conducting the workshop. After all, we could slide down the nations largest corkscrew slide during our break as well as cruise around on Segways if the line proved to be short enough. The workshop went smoothly and before we knew it we were running around the museum after hours before getting some Peruvian cuisine with the museum staff. At dinner we all recounted stories of SparkFun and Science Museum Oklahoma hi-jinks - we remotely turned Tim’s office monitor off via the internet, they pretended to have misplaced poisonous spiders on the new boss’s first day. Aaah, geeks.

Tuesday found us at the Jasmine Moran Children's Museum for more Scratch. These kids were really sharp; some of them turned out to be really into animation and one of the girls wound up figuring out nested If statements independent of the workshop instruction.

On a personal note I almost bought a hedgehog from one of the workshop participants to bring home. I was on the fence thinking that a hedgehog is small enough that it could be a cool travel companion but eventually gave in to my inner adult who told me that I’d be heartbroken if it died due to my absence at home. While Pam and Chris pretended to be robots and sensors in order to illustrate aspects of physical computing and I pondered a little spiky companion our driver, Dane, helped a kid wrench on some pretend cars in the museum’s kid garage. Between all of us we taught every single aspect of physical computing. Ok, the mechanical engineering aspect wasn’t directly connected to Arduino, but there was a Funion teaching it in the building! 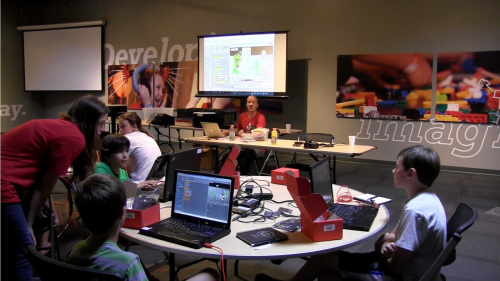 Picture courtesy of Brent Weber at the Oklahoma Museum Network

We had the next two days off so we headed further east that night in order to be closer to the next workshop stop, but not after gorging on ice cream at Braum’s. A place that strangely enough, Chris noted, has what looks like a meatball on top of an ice cream cone as their icon.

When we pulled in to our RV campsite that night, a man with his family greeted us as they were leaving the pool. He ran over excitedly and asked if we truly were from SparkFun. We explained who we were and why we were in Oklahoma, and he introduced himself as Jeff and when I told him we’d be happy to take a look at some of his projects he left with a big old smile on his face. It was a pretty amazing coincidence because he was on a family vacation all over the nation and he had just left Colorado to head back home before the end of the summer. Needless to say he was a big fan of SparkFun.

That night as we unwound, Jeff regaled us with stories of helicopter wireless news camera control systems, writing LCD drivers from scratch and the Easter egg he had placed in the camera control system. One thing Jeff was adamant about - he wants to see an Open Source development environment for the STM32 (I told him if he's lucky he might wind up seeing some info about that in the blog comments...). Just before he took off into the night Jeff explained that outside of his job he had few people to really geek out with, which is why he was so excited about our presence. I suggested that he could start a HackerSpace and starting teaching people in the community around him in order to grow a community that might be interested in technology and building electrical systems. 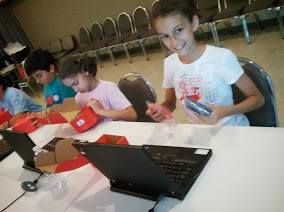 Little learners working with If statements and sensors

During one of our days off our campsite experienced a localized tornado. Luckily we were a couple miles away enjoying pizza and subs. When we returned to our campsite we discovered that had we stayed, our RV would have sustained considerable damage. There were tree limbs everywhere, especially in our previous parking space. We parked elsewhere, surveyed the damage and collected some tree limbs to use in a campfire. Luckily not a single RV or abode had been damaged in the storm. The trees were not so lucky.

The rest of the trip went by at a similar pace. We went back to Science Museum Oklahoma one last time before heading to Discovery Lab - Tulsa Children's Museum for our final workshop. It was great teaching such young kids about programming and microcontrollers. Although I still kind of wish I had bought a hedgehog.

According to Pete: August edition!