It's probably been done a few times before, but it's really neat to be able to control an Etchasketch with a couple accelerometers.

by Nate April 22, 2008 6:00 am UTC 1
Favorited Favorite 0
It's probably been done a few times before, but it's really neat to be able to control an Etchasketch with a couple accelerometers. 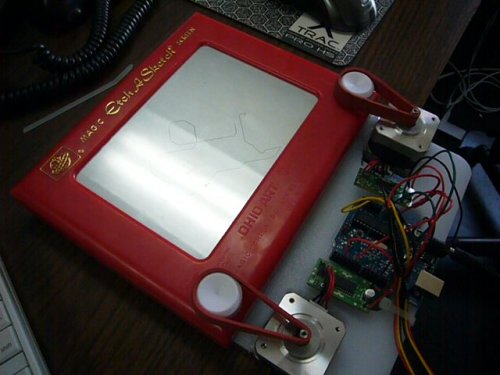 Alex Dow did this project for a class at the University of Colorado. It uses the Arduino connected to two EasyDriver controlled stepper motors. Power was provided over a 9V wall supply. The rubber bands were a very creative and successful clutch in between the motors and the knobs. If anything went wrong and the Etchasketch hit a wall, the motors would spin in place and not damage themselves or the electronics. The backing is a modified cutting board making the entire project very solid and easily portable. Using the Arduino platform made the code very easy to create. 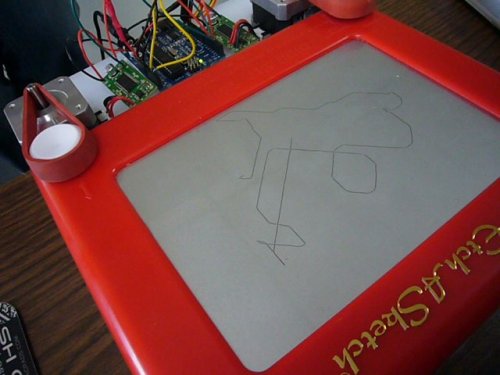 Using two ADXL322 accelerometers embedded into separate wristbands, the user(s) control the the knobs independently. Tilt your hand left and the Etchasketch goes moves up. Your buddy tilts his hand right and the Etchasketch moves right. It's a collaborative effort to sketch!

I apologize for the video. We should have done a lot better! We are working on our video skills. I hope you get the idea. It was an awesome idea and a quick project that turned out really well! I need to build one for me now...