SparkFun welcomes yet another Pete into the fold - meet Pete Marchetto, hacker extraordinaire.

It's time once again to welcome a new likeminded geek into our clutches to work on their dream project! Our latest hacker-in-residence comes to us from Cornell University in New York; everybody meet Pete, who's here working on a data transponder! (And - we're happy to share the new ElectricBone tutorial from one of our past hackers Carlos!) 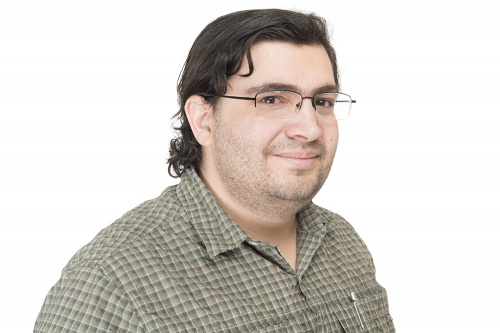 Can you share your background, interests, and some favorite past projects? What and where is your current position/company?

My background is a long and sordid tale beginning in my youth. I started out a physicist, and now do engineering work to give tools to biologists who need them. I still consider myself an applied physicist, and often take the bottom-up approach to problem solving favored in that field. The biologists who I build things for - including my wife, a plant ecologist - work on macro- and population-scale biology. While molecular and micro-biologists have fun toys due to greater funding and their fields' similarity to chemical engineering, these biologists often have to make do with off-the-shelf stuff that doesn't fit their needs. This makes for a whole host of awesome engineering problems that almost no one else is trying to solve.

One of my favorite projects to date was that of chimp-proofing an acoustic recorder that we were using to record African Forest Elephants in Gabon. Chimps are very much like humans, especially in that if they see a new thing in their environment they try to break it, mainly to see what's inside. We have recordings of chimps bashing these recorders with sticks and stones. We wound up using perforated aluminum sheeting to create a cage for the recorder. In doing a waterproofing test, I noticed that the sound of rain hitting the cage was much higher in frequency than that of rain hitting the recorder enclosure itself. Thus we'd accidentally solved another problem at the same time: how to record low-frequency elephant calls during the rainy season. I also invented a way to synchronize our underwater recorders using cosmic rays, all with <$25 worth of parts. But that's a story for another day.

I am the Engineering Physicist for the Hardware Engineering Group in the Bioacoustics Research Program of the Cornell Lab of Ornithology. I'm also a graduate student in the field of Biological and Environmental Engineering at Cornell University in Ithaca, NY.

How and why did you get involved in SparkFun's Hacker-in-Residence program? Why do you think programs like this are valuable? I got involved in this program to build instrumentation for my PhD work, which maps the amount of noise that animals are exposed to relative to their spatial position. I think residencies like this one are very valuable to help make new ideas into new things.

What is the project you'll be working on at SparkFun, and why did you choose this project? I'll be working on V.2 of my instrument that I'm making for my PhD research: the Sound Pressure Level Observing Transponder (SPLOT). This device allows data from several sensors to be transmitted back via satellite from almost anywhere on Earth's landmass in 41-character "data tweets.” This is inspired by Nate Seidle’s work on the Run SPOT Run board.

If you could have any super power, what would it be, and what is your favorite food? I would have the powers of a Druid, as envisioned by Kevin Hearne in his Iron Druid series. I’d especially love being able to transform into an otter, cat, or owl. And savory pies. I was recently to Scotland, and was very impressed by vast density and intense variety of meat pies available in the UK.