The Race to the Bottom: LED Bulbs and DFM

The dropping cost of LED bulbs is accelerating. We compare a few brands to see how they are approaching design and lower cost manufacturing.

You've probably noticed LED bulbs situated next to the incandescent and compact fluorescent (CFL) bulbs at your local hardware store. I spend way too much time in these aisles. This is capitalism at its finest! I find the battle of new tech, smart manufacturing, and massive demand intriguing.

I've switched almost all of the lights in our house over to LED in part because of the (small) energy savings, but mostly because I'm lazy: A 22-year lifetime means I don't have to climb a ladder for a while. When I purchased my LED bulbs a few years ago they were around $15 a pop. As with most all tech, I've watch the price drop over time. In this case, LED bulbs in my local Home Depot (Philips 60W) are hovering around $10. On a recent visit to the lighting aisle I was taken off guard when a pack of two 60W bulbs by Philips were selling for $5 ($2.50 each!). This is not just a drop in price, this is an all out price war between some heavy hitters.

Confusing me was the fact that right next to these 60W bulbs for $2.50 were 60W bulbs for $10 from the same manufacturer. Upon closer inspection I noticed something odd. These lower cost LEDs had a display life of 10 years as opposed to 22. Ok, so they shaved some cost by shortening the life span of the bulb. Neat marketing trick but the engineer in me wanted to know how.

So, in a moment of weakness I bought a handful of different 60W bulbs and manufacturers just to see what lay beneath... 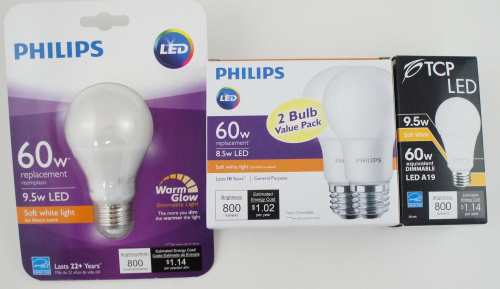 Nothing too crazy. Each bulb claimed to be 800 lumen at various power consumption levels (8.5W to 9.5W). And I only noticed this now but the cheap bulbs are non-dimmable. Interesting. 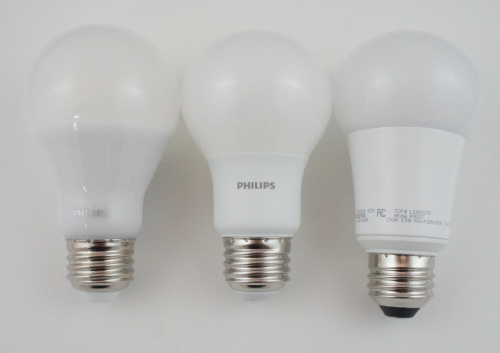 Hard to see in the above image but the bulb in the center (cheap Philips) is slightly shorter than the more expensive Philips bulb. The TCP is about a centimeter taller. This has little effect on lighting but millimeters of materials will begin to matter. 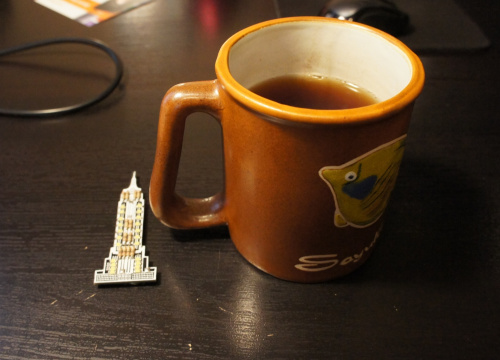 8.5 Watts of glorious LED light on my Sayulita coffee mug

I did a quick initial test to see how the bulbs performed. They all have seemingly identical brightness and warmness so I'm going to trust the advertised 800 [lumen](https://en.wikipedia.org/wiki/Lumen_(unit) rating. 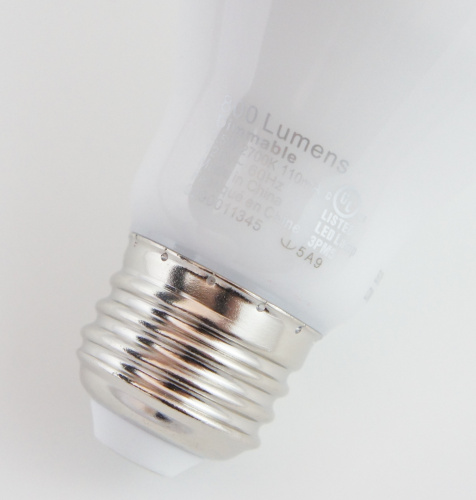 Hard to photograph, but the first bulb we'll be dissecting is the $10 Philips 9.5W bulb that consumes 110mA at 120V. I'm not sure how they get to a 9.5W advertised burn (120V * 0.11A = 13.2W). Perhaps the actual LEDs consume 9.5W and the ballast (the thing converting AC to DC) consumes the rest. This would be a super-sneaky marketing ploy, as I assumed the rating on the outside of the packaging was the overall power consumption of the bulb. 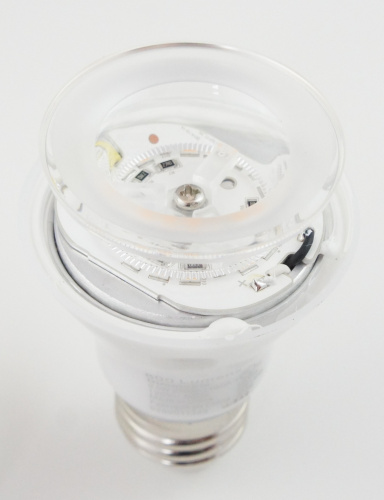 All three bulbs had opaque plastic upper bodies. The expensive Philips bulb came apart with some strong twisting. Underneath was a neat plastic diffuser. 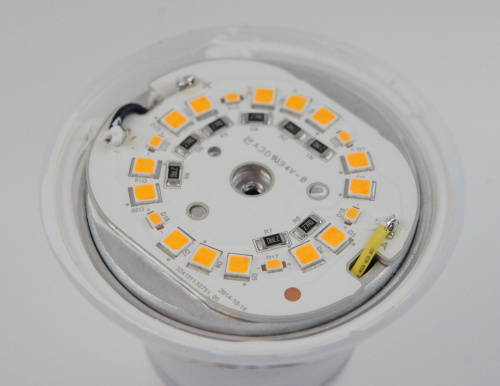 Under the diffuser was a mixture of small and large LEDs. Not what I would have expected – 14 big LEDs, 6 small.

Note the three wire connections labeled +/-/A, as well as the date code: 2014-10-14, a delta of 7 months from when I purchased the bulb. The date is probably in relation to design version and not manufacture date. 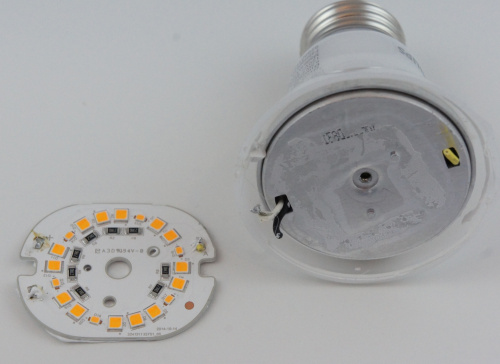 With quite a bit of prying force, the metal LED PCB comes off the metal base heatsink. This was to be expected; there was good thermal grease sandwiched between the PCB and the heatsink.

I originally tried to desolder the wires connecting the PCB to the ballast but quickly gave up as my solder iron was not hefty enough (nor was I patient enough) to bring that large chunk of metal up to soldering temperature. 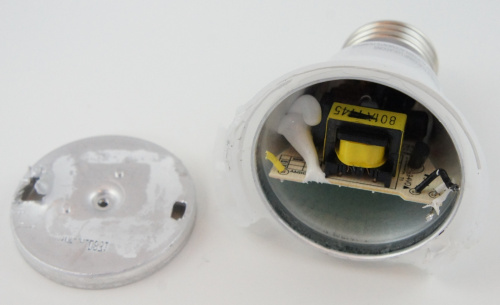 Some further prying and we can see the ballast underneath. 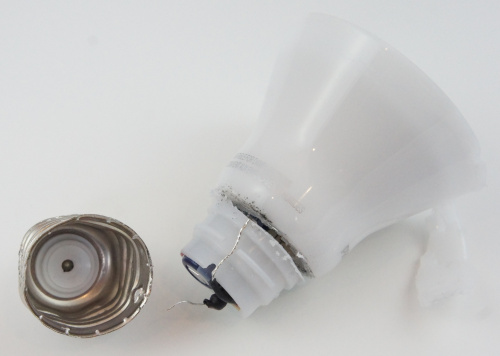 I got a bit forceful with a hacksaw so ignore the hack marks for the moment. The metal base is threaded onto the plastic base and then spot crimped to the plastic (you can see the multiple dots or dimples around the metal base). This is the first clue that Philips is working on simplifying the manufacturing process. Furthermore, the two exposed wires in the picture are not soldered to the base, they are compressed to it, additionally simplifying the assembly process. 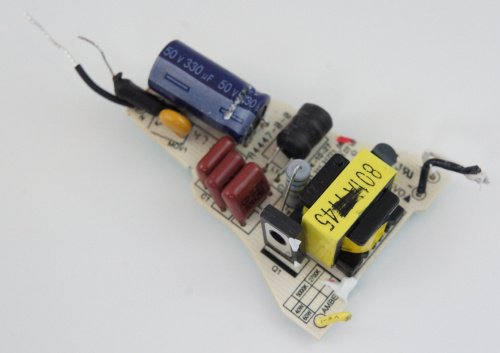 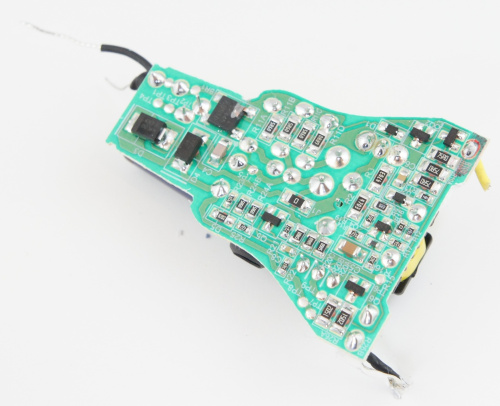 Here is the rear side of the ballast. A smattering of passives plus an ABS10 (datasheet) bridge rectifier. 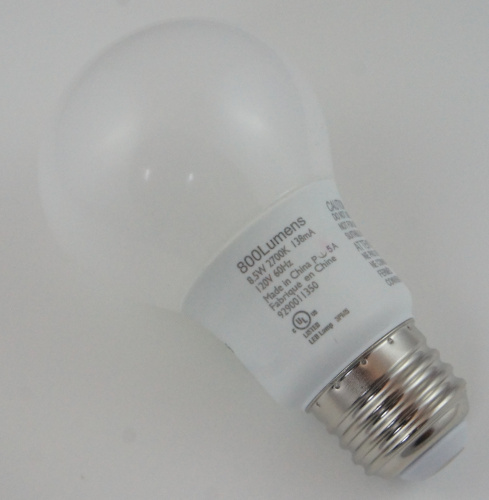 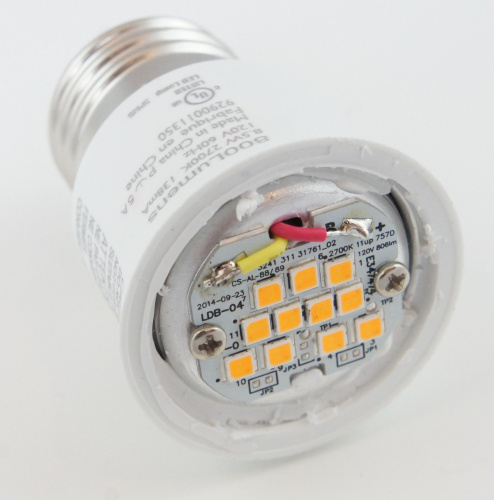 With a little bit of twisting the opaque cover came off to expose the LEDs. This bulb does not use a diffuser. 11 large LEDs, but no small LEDs like the last one. Also note it has only two wire connections. Date code of 2014-09-23 puts this design prior to the more expensive bulb. I'm curious what the jumpers do... 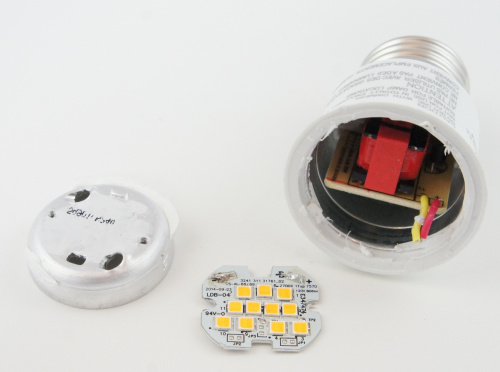 Removal of the two screws and some forceful prying removes the metal PCB from the heatsink. The PCB is thinner and the overall metal content is much less than the larger, more expensive bulb. Perhaps this is the reason for the shorter life, and possibly a factor in the reduction of cost (less metal = less $). 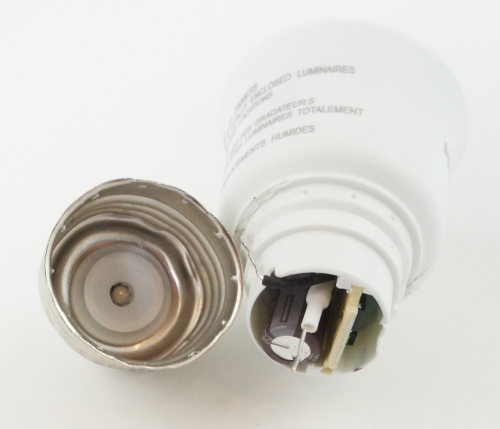 Just like the last Philips bulb the two AC wires are connected via pressure against a twist on base. 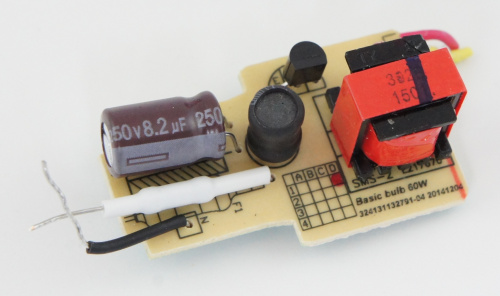 The ballast slides out easily once the base is off, and we can see it's much more simplified than its more expensive brother. It still uses a fuse (thanks Philips!). Q1 is a 13003 NPN power transistor. The inductor is 3mH. Big cap is 8.2uF/50V/105C. 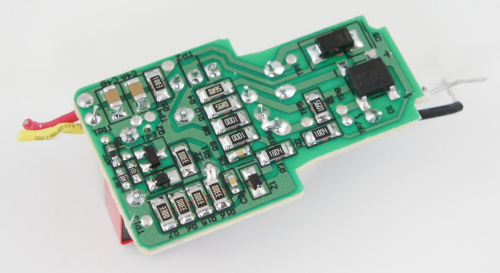 I am somewhat surprised to see they silkscreened the back side of the PCB. I would have guessed they would save a few cents and not put component labels on the board. Perhaps there are just enough polarized components that they wanted to avoid the possibility of error. 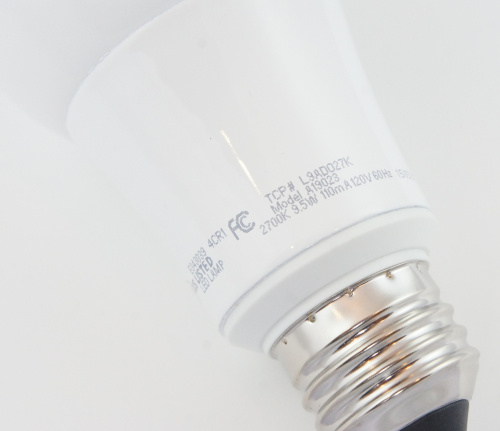 Finally we have the bulb from TCP. I have never heard of this brand but wanted to see how the design for manufacture might compare to that of Philips. 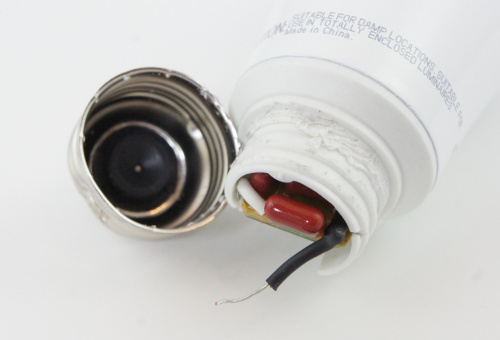 This beast is much harder to open. The base of the bulb came off before I could hammer the top off with a screw driver. Same technique: the AC wire connection to the ballast are press fit under the base. 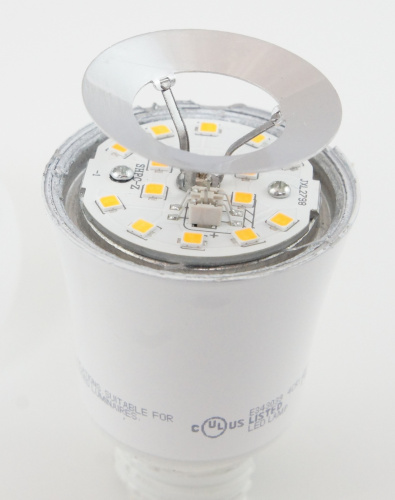 After much fighting and dirty words, the lid was removed. This bulb uses an interesting metal diffuser. Underneath are 14 large LEDs.

Note the power connection to the PCB comes in via an SMD connector from the bottom. I thought this was a great way to simplify the connection between ballast and LED boards. 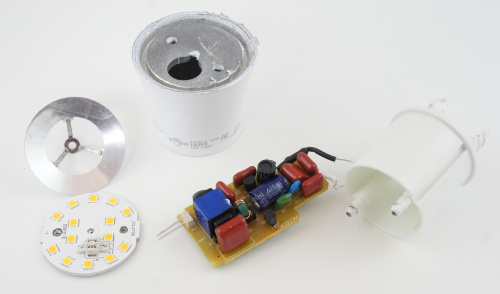 The TCP bulb was a beast to take apart. Here are the bits. Of note, this bulb uses one solid piece of metal rather than two and uses an additional plastic insert not found in the other bulbs. 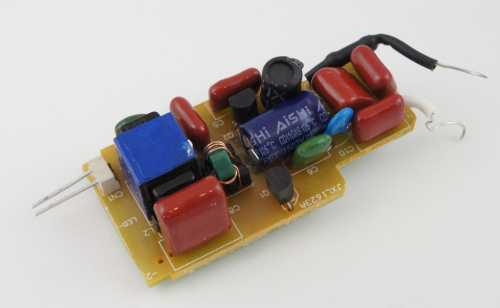 The ballast in the TCP is similar but slightly more complex than the other two. There are more caps and an additional, small transformer. The two transistors are 122DL NPN (datasheet). 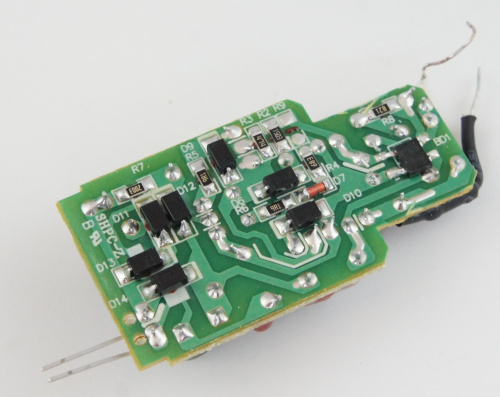 The backside is more sparse than the other two ballasts, but contains similar parts. The bridge rectifier is the MMB6U (no datasheet found). Many more tantalum caps diodes. 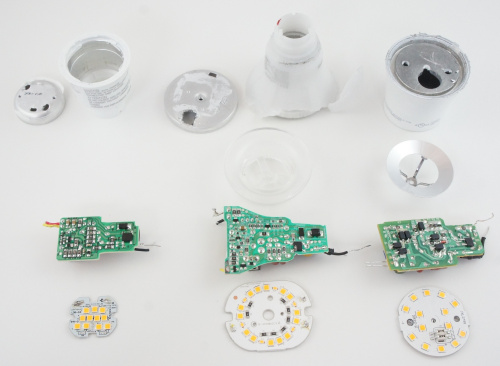 The ability to remove heat from the LEDs (or lack thereof) will affect the lifetime of the bulb. Weighing out various metal bits:

More metal does not necessarily mean longer life but we see where the $2.50 bulb is shaving costs.

That's a total BOM cost of around $2.58. I am obviously taking big swags at the cost of components, especially in the volumes Philips must be dealing with (hundreds of millions to billions sold each year). My point here is that no matter how much you buy of something it's never zero.

I assume Home Depot is getting 20% margin (this is very thin, most retail is 50% or more). This is a fool's errand obviously, but I just can't make the part costs sane and have Philips come out in the black.

In the end I am dumbfounded by the market drivers of competition and scale. The lowering of the cost of materials, manufacturing, and marketing seems to have pushed the race to the bottom even harder. For $2.50 I am willing to forgo dimming and accept the decade-shorter life span.

Gone are the days when you could string a coil of wire inside a vacuum and use it to light up (and heat) a room. I've got a bulb left over from the $5 2-pack. I'm not sure if the bulb will still be lit (I'll check back in if it burns out) but I'm excited to see where lighting technology is headed in the coming years.