5 Tips for Winning at Hackathons (and Other Unsolicited Opinions)

I have a love/hate relationship with hackathons; maybe my rant can give you some helpful hints next time you compete. 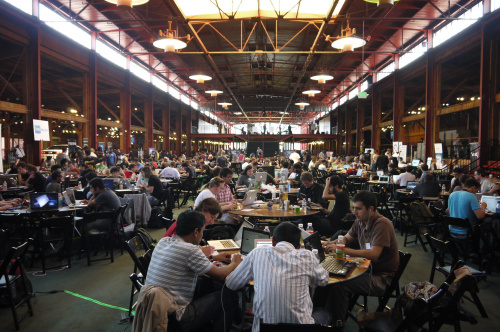 The concept behind a hackathon is fantastic. It's a competition where groups of people work diligently on a project for a set length of time (generally around 24 hours), and then present their projects to the whole group at the end. If you have never been to one, I definitely recommend trying it at least once in your life. You don't even need to be a tech nerd! I have seen plenty of hackathon teams include graphic designers, sales people, and business development folk. For most types of hackathons, being able to pitch a product idea is key, which brings me to my first point:

1. It's all about that pitch 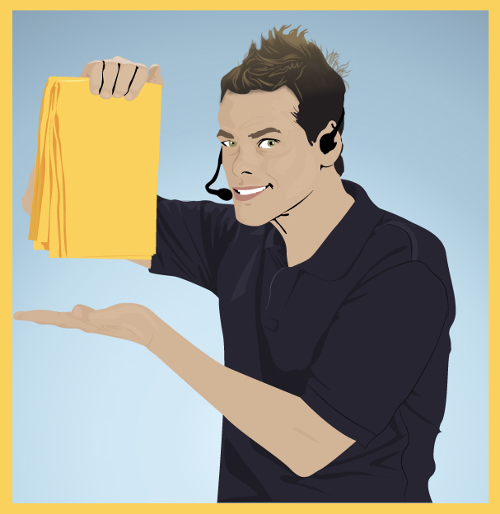 Really, my biggest pet peeve and biggest piece of advice I can offer is that you need to sell a product idea. The reason I say it's a pet peeve is because, to me, a hackathon should be first and foremost about having fun and working on a project that you and your team want to work on. It should not necessarily be the next piece of experience-enhancing, disruptive technology that will be sold for $2 billion to Facebook.

That being said, many times, the panel of judges that decide whether you take home that juicy $10,000 prize or not are made up of:

I always recommend going to a hackathon with the intention of having fun and learning. If you feel the need to go for the prize(s), then keep in mind who your audience is. More often than not, the "unique" panel of judges (see A and B) will want to see something that can be productized and sold as a solution to a problem (so leave your fire-breathing dragon scupture idea at home).

Give at least 2-3 hours before the deadline to your best public speaker on the team to put together a knock-out presentation. I have seen great demos (even as product ideas) fail because the presentation was awful, and I have seen so-so product ideas take home the big win because the pitch would have felt at home in a San Francisco venture capital firm. Just promise me you won't sound like this. 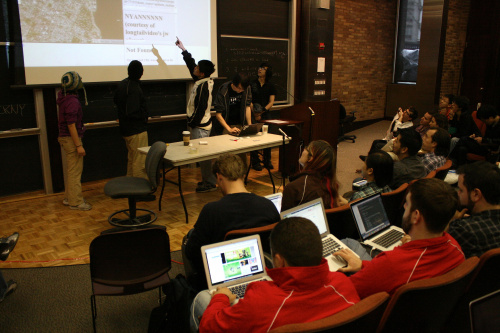 Yes, I know that I touched on this in #1, but I really feel like it deserves its own category. In the same vein as the fire-breathing dragon sculpture, projects for the sake of art or learning seem to be unwelcome at hackathons. If you know of any hackathons that value these pieces, please let me know! As far as I can tell, that only seems to be the purview of Maker Faires.

Any business 101 class will tell you that your product or service needs to solve some kind of problem. Certainly there is a place for luxuries and extravagance, but in my experience, your panel of VCs and mock-VCs (aka "the judges") will value necessity over indulgence. Are you connecting people? Creating more free time? Offering security? Think about this as you are designing your product and your pitch.

3. Show that your project can work 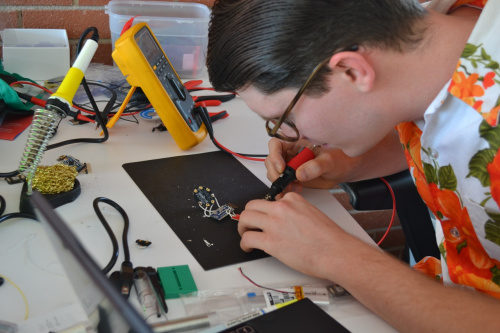 Me, spending far too long soldering something to prove it worked at the Pebble Rocks Boulder Hackathon

Notice I didn't say, "Show that your project works." The operative word here is "can." At the hackathon pictured above, the team that took home the best prize proved that they could receive wireless messages on the smartwatch from an Arduino, but they did not go so far as actually receiving messages from satellites due to time and cost restraints during the event.

Simulation and correctly articulating how the end product should work are two perfectly acceptable workarounds to an incomplete solution.

4. Go for the niche technology 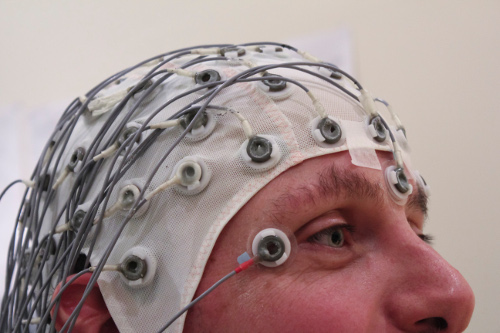 Let's be honest here. Most of the larger hackathons are funded by large corporations with the hope of getting people to use and ultimately buy their technology. In short, hackathons are a great marketing tool.

Many companies show up to larger hackathons in order to entice people to evaluate and use their product (or some developer version of it). Sometimes, these companies will give out specialty prizes for "best use" of their technology. If you have not pre-planned your project before the event (not a bad thing; I have seen a number of winning teams come up with the idea on the spot), then keep an eye out for these "best use" prizes. You generally have a better chance at winning them since not every team will likely be going for them.

5. Stick to a schedule 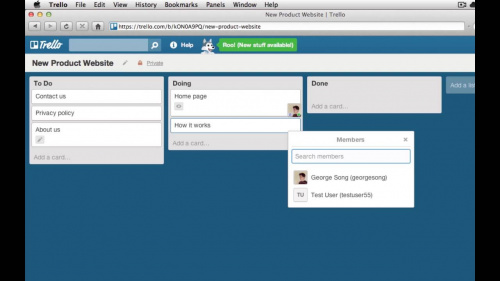 Twenty-four hours seems like a lot until you try and work those last six hours on no sleep. If you have a predetermined team and a project idea, then I definitely recommend setting up milestones in some kind of scheduling tool before the event begins (Trello worked well for my team). It doesn't need to be broken down to the exact minute, but general milestones to know if you're on track or if you need to drop features help tremendously. But really, please, no coding or building beforehand (it's a sleazy thing to do).

If you form your team or idea at the start of the event, I also recommend taking the first hour or so to nail down your idea and a basic schedule. Nominate someone as the project manager and have them check in with the team at predetermined times (e.g. every four hours).

The Pebble Rocks Boulder event was 48 hours long (lucky us), and we had a group check-in (similar to a daily stand-up meeting) at each meal break. This gave each person the opportunity to give their status and say if they needed help with something. By using a scheduling tool, we were able to break the project down into steps and know if we had enough time to complete the things we wanted. In the end, we were forced to make a few key pivots, such as switching to C from JavaScript and dropping frame animations on our smartwatch game.

Make sure you leave enough time for #1, and if you find something isn't working, refer to #3.

If you are like me, you probably have a hard time recovering from all-nighters (I did not sleep during my first hackathon, and it took me a week to recover). If you come up with a solid idea, prepare a good pitch, stick to a schedule, and don't be afraid to pivot, then you'll have a good shot at winning some prizes and getting some sleep.

If you decide to attend a hackathon, go with the mindset of having fun and learning. Remember that most hackathons are designed to market products and services to you, but you can use that knowledge, if you must, to walk away with some good prizes.

What are your thoughts on hackathons? Are there tips you would share with others attempting one for the first time?

SXSW and the SparkFun SticKits Contest