Maker/hackerspaces that are leading the charge to make STEM fields less alienating for LGBTQ+ makers.

On this particular Tech Talk Tuesday, I want to take a break from projects and talk about something near and dear to my heart. Don't worry, I've been working on some fun builds that I can't wait to share, and you'll hear all about them on my next T³ post. I know, I know, I'm supposed to be ruining a laminator or playing with poison, and we'll get back to that, but stick around this week and you might learn something cool anyway!

Note: As this is an ongoing cultural discussion and progress happens quickly and constantly, some terminology may fall in and out of favor. Please note that my choice in terminology such as LGBTQ+, Queer and Trans* come with only the best intentions and I apologize for any offense caused on present or future reading of this article. Thanks!

June, while first-and-foremost the month of my birth, also happens to be LGBT Pride Month! Okay, so my birthday isn't exactly a grand occasion, but Pride Month certainly is. This month, cities all over the world are holding parades, parties, workshops and conferences to commemorate the history of the LGBT civil rights movements and celebrate everyone's right to love whoever they choose. Here in Denver, PrideFest happened right alongside Denver Comic Con, a confluence the likes of which can only be explained (although not fully) via pictures like this: 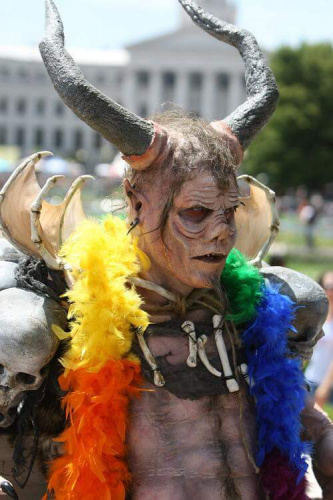 Times like these remind me how diverse and inclusive geek/nerd culture can really be. There is absolutely still a civil rights battle being fought, and certain vocal segments of nerd culture can be notoriously backward and cruel, but all-in-all I have to say that you (whether you consider yourself a nerd, a geek, a maker, or just a hobbyist) are a very diverse, cool and accepting group of folks. And why wouldn't that be the case?

A cursory glance at the cultural landscape reveals LGBT folks in all facets of geekdom: tech leaders like Apple's Tim Cook, Linux International's Jon "maddog" Hall, and the current Chief Technology Officer of the United States Megan J. Smith; nerd icons like Star Trek's George Takei; historic inventors like Alan Turing; even fictional icons like Professor Dumbledore or X-Men's Mystique. Queer leaders and icons from history and pop culture are helping both the tech and entertainment industry better reflect the diversity of the world we live in every day.

Still, the tech industry (and geeks in general) have a long way to come before we can declare an end to LGBTQ+ discrimination. While the tech industry as a whole is comparatively enthusiastic to embrace gay men, it still lacks representation from women and trans* people. In an era where tech companies are striving to repair a history of systematic sexism, it can be hard for any woman (including lesbians, bi/pansexual women and transwomen) to get a foothold in the industry without a strong support network.

So during this month, when logos Internet-wide are going rainbow, I wanted to highlight a few projects that are going the extra mile to reach out and help LGBTQ+ makers, hackers and entrepreneurs:

This Harvard hackerspace meeting is an excellent model of how to conduct a hackerspace for people that may not always feel safe or comfortable in other tech spaces. Their community guidelines balance a spirit of inclusivity (dudes are welcome) with a genuine concern for safe space (if you are found to be making other attendees uncomfortable, they won't hesitate to kick you out!)

Their About Us page says it better than I could:

"Queercon started 10 years ago as a hacker party inside of the annual Defcon hacker conference. Over the decade Queercon has grown into the largest social network of LGBT hackers from around the world. We continue to grow and now focus on outreach to the LGBT community within the IT Security and Hacker Spaces.

Our basic belief is that there are more queers in geekdom than most people might think, so if we can meet a few of them, maybe make a few new friends, that sounds sweet to us. Of course, anyone queer-friendly is equally welcome, and cheers to you."

In the United States, trans*, gender non conforming, agender and non-binary people are unemployed at twice the national rate, and suffer discrimination when accessing health care, legal services and housing. TransH4CK is an organization that attempts to address those problems using technology, while also bringing visibility to trans tech innovators and entrepreneurs. Their code of conduct is also exemplary. 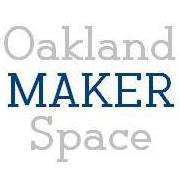 LOL! is a people-of-color-led, gender-diverse, queer- and trans-inclusive hacker/maker space in East Oakland. A creative space that's run by the community and for the community, LOL! isn't just a safe space, but a necessary one.

There are so many organizations that are doing great work at the intersection of tech and LGBT rights that it would be quite a chore to list them all here. If you're interested in finding a safe space to hack chances are, there's a group in your area.

Some of you may be thinking, "Nick, what does it matter if someone is a 'queer maker'... aren't they just a 'maker?' I'm gay, but so what? It doesn't change the way I use the hackerspace." and to you I say: Heck yes. Lots of people are makers, lots of people are queer; those two facts have almost nothing to do with each other... just because you're gay doesn't mean you have to join a "gay hackerspace" or vice-versa. You're completely right... but... just like in the rest of society, there are still pockets of violent discrimination. Being LGBT in STEM is important in the same way that being a woman in STEM is important. One day, those distinctions will sound silly, but in the meantime it takes a concerted effort to level the playing field.

Hey, chances are if you're a considerate person then you're not contributing to the problem! If you want to go above and beyond in the fight for civil rights on behalf of your LGBTQ+ friends, you can support one of the groups I mentioned above. Otherwise, just be mindful of the language and culture at your local hackerspace, and take it seriously when someone says they feel uncomfortable. There's conflict inherent in joining a hackerspace; let's try to keep that conflict out of people's love lives and focus on who lost the 5/8" drill bit. We'll all get a lot more work done that way <3.

I had hoped to list some of my favorite out makers for you all to follow on Twitter and YouTube, but I didn't get a chance to message any of them ahead of time to see how they might feel about it. If you'll settle for one queer creative tech, you can always follow me on Twitter @NorthAllenPoole to see what I'm working on. And, of course, you'll be hearing more from me right here on Tech Talk Tuesdays where we shall return to our regularly scheduled shenanigans. Happy Hacking!