We've made a "Stranger Things"-inspired message wall for your viewing (and tweeting!) pleasure.

Lots of us here at SparkFun are fans of the Netflix original series "Stranger Things." It's a super creepy sci-fi/horror show, and there's one scene where a mother, played by Winona Ryder, attempts to contact her missing son using Christmas lights strung on the wall as a sort of ouija board.

Obviously, we had to have this for the office. 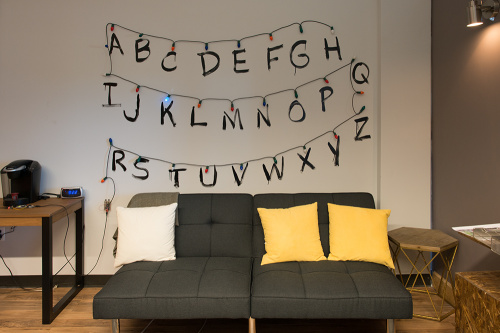 Come in and sit a spell.

To make it, I used our addressable LEDs, strung together with bits of cut-up USB cable. Then, for each LED, I took an old-school C7 Christmas light, cracked off the metal base and extracted the guts. I then pulled a socket off a strand of lights, hollowed it out and hot glued those two pieces together. Finally, I slipped the completed assembly over the LED.

The whole array is being driven by an Arduino Pro, receiving characters over a serial port so you can type in a message to appear on the wall.

But why stop there? I've hooked up a computer to the Arduino and have it searching twitter for the hashtag #sparkfunthings. ~~If you mark a tweet with that hashtag, it'll appear on the wall, and you can see it over the webcam feed below.~~ The livestream has ended for now, but it may be back! Here's a recording of our livestream...

If you're interested in making your own version, all of the code is up on the SparkFun GitHub page. Here's a list of all the bits and pieces (short of the Christmas lights, which can be easily found on Amazon) needed to implement your own version of it.

SparkFun's minimal design approach to Arduino. This is a 5V Arduino running the 16MHz bootloader.

This is a basic breakout board for the FTDI FT232RL USB to serial IC. The pinout of this board matches the FTDI cable to work…

This is a standard issue USB 2.0 cable. This is the most common A to B Male/Male type peripheral cable, the kind that's usual…

We know this looks like a lot of our other LEDs, but it's not! This is a PTH Addressable RGB LED with a WS2812 (or "NeoPixel"…

Everyone knows and loves Raspberry Pi, but what if it could be faster, say 6x faster. The Raspberry Pi 2 is here to provide y…

I hope you enjoyed this little project as much as I enjoyed building it. Thanks for watching, and look out for the Demogorgon!