The good, the bad and the $700 IoT cold-press juice machine.

Just a few weeks ago, a heretofore unknown company called Juicero released its first product...and became a laughing stock. If you haven't been clued in yet, the short version goes like this: An organic juice visionary started a venture capital dogpile in Silicon Valley after pitching a machine that was — in some ways — the Keurig of juice. After raising what can only be described as wads of cash — about $120 million — he began to ship a $700 machine for squeezing bags. What's in the bags? Sliced-up stuff for making juice. How hard do you have to squeeze the bags? Well...supposedly, the press in the Juicero could "lift two Teslas" (ugh), but it turns out that reporters at Bloomberg had no problem doing it by hand. No word on whether those same reporters had tried lifting a Tesla. The price dropped from $700 to $400 on the bulkier-than-promised connected juice press, and now Juicero is "feeling the squeeze" — a pun that found purchase on the lips of every tech reporter who touched the story.

In my own humble effort to further lampoon this ill-fated device and its swaths of dejected early adopters, I present the following...please enjoy:

Obviously there are some bugs to work out, but I'm expecting a check from Alphabet Inc. any day now. Before we talk about the myriad ways in which the Juicero was almost this bad of an idea, why don't I give you the wiring diagram and code so you can make your own?

Is there any reason at all that you would want to build a cardboard Capri Sun dispenser? Well...I can't answer that question for you. All I can do is show you the door; you have to walk through it. The Juicezero is a simple Spectacle circuit. A button board acts as the trigger for a light board, which controls the lighting effects behind the badge on the front of the Juicezero. A motor board controls two servos, which squeeze the juice pack when the button is pressed. The two servos are pulling on a hinged piece of cardboard with paperclips that have been bent into shape to act as lever arms. The whole structure of the device is made from hot glue, double-sided foam tape and old Soylent boxes, probably not unlike the Silicon Valley prototypes...

The Spectacle diagram for the Juicezero looks something like this: 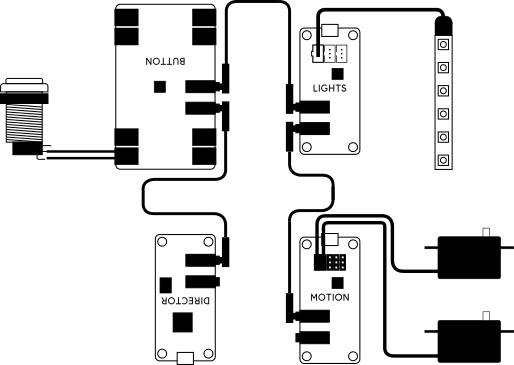 And you can open the configuration for the Juicero right here:

And that's pretty much all there is to it. Is it useful? Not really. Was it a fun two-hour build? Yeah, totally. I guess the only thing left to do now is talk about the real Juicero and why the heck it ended up on IoTuesday...

Juicero primarily got slammed for selling bags of juice ingredients that are pre-processed enough to squeeze (apparently by hand, even) but not enough to just...you know...drink. And on top of that, they're apparently selling a $700 $400 machine for squeezing those bags into juice. But there's more to the machine than just the press mechanism; in fact, there have been a few really nice teardowns of the Juicero that prove that — despite the flawed concept — the machine itself is built like a tank and pretty smart. It's just...a lot of kit for a juice machine.

So what else does it do? Well, it has a scanner for reading the barcodes on Juicero's produce packs as well as a WiFi radio for connecting to the internet. Why does a juice machine need an internet connection? Ostensibly, it's for checking the expiration date of the produce packs and could also be used to enforce product recalls. This is almost an interesting idea, except that it seems odd for a company to potentially shift the liability for a food poisoning incident onto themselves without there being some kind of advantage for them. In this case, the advantage is clear: DRM for food! Remember, the Juicero has been called the "Keurig of juice," and if you're familiar with the history of Keurig, you'll know that they spent a few hardware revisions trying to lock out third-party brew pods. No doubt Juicero is worried about the same thing, considering the produce packs are available only from Juicero on a subscription plan.

You can almost excuse Juicero for wanting to preserve its subscription-based revenue model, and if you're going to advertise that your juice machine protects customers from product expiration and recall, the last thing you want is someone getting sick from a third-party pack and blaming your machine. That said, the whole thing feels a little slimy, and it also feels like the kind of product that started out reasonable enough but made a lot of concessions to their investors. For instance, if the Juicero were just a no-mess cold-press juice machine, it would be just about worth $400. They could easily have opened a subscription revenue stream selling refillable juicing bags, which would doubtless wear out over time. Conversely, if they wanted to sell cold-press juice with a closed-loop food safety system, why not just press the juice and sell it bottled? It's not as though the shelf life of a produce pack is longer than that of a bottled juice drink. They could easily have released a smartphone app that scans the juice barcodes and alerts the user to expiration or recall...even rewards the user for drinking a certain amount of juice.

In the end, Juicero is still in business. There are probably people enjoying a freshly pressed glass of bag-juice right now. But they did take quite a beating in the media and the months-early price reduction of their hardware seems to indicate that their business was hurt. I'm fond of saying that even a lead kite will fly with enough wind, but apparently $120 million and the direction of a former Coca-Cola president wasn't even enough wind for this kite...or maybe it was too much wind. Either way, it's valuable to remember that venture capital is just a chance to be successful; it isn't success in and of itself. Also, it isn't a guarantee that your product is market-worthy. And finally, luxury products and services can be a hard needle to thread: while some people are willing to pay an extreme premium and give up some variety for convenience, customers can also tell when you're limiting their choices for your benefit and not theirs.

What's your take on the Juicero? Let me know in the comments!

According to Pete: Drones and the Futaba Serial Bus