Have you ever been curious about what the differences are between narrowband and broadband? Let's get into it!

When talking about narrowband vs. broadband (also sometimes referred to as wideband), there is no inherent better frequency - however, the context of use will result in a better choice for your application needs. Generally speaking, a narrowband frequency - the number of radio waves in a fixed distance in a given amount of time - is narrower than broadband. These definitions will also depend upon individual applications as well. Most individuals are familiar with broadband in their everyday life, as it has the ability to provide high-speed internet access for movie streaming and many more data-heavy services. Narrowband communications also have a role in everyday life - such as remote controls and RFID. 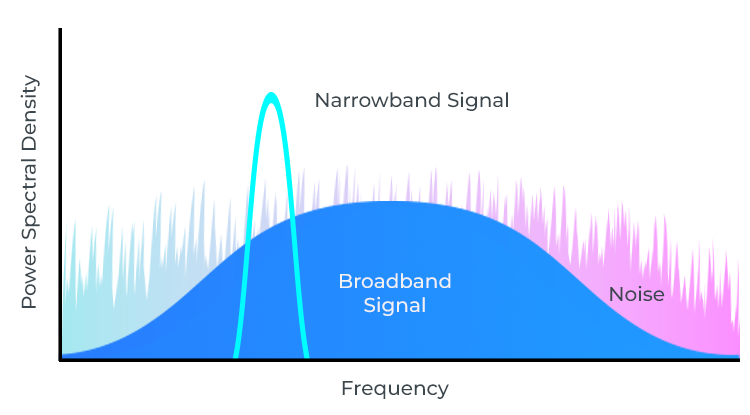 Narrowband signaling occupies a narrow range of frequencies, referred to as flat. While the actual frequency of a narrowband radio wave varies depending on the source, one thing that is for certain is that narrowband waves travel good distances with low power requirements. These signals require high performance filters to avoid noise disturbance. The signaling method is typically implemented in telecommunications for transferring voice data within a limited number of frequency sets. The United States FCC has actually allocated specific narrowband frequencies for mobile radio and IoT services for public use. Given that narrowband frequencies have a lower transmission of power, they are great for solar-powered solutions or applications that need to get the most out of battery life.

Having the ability to have physical devices ("things") collecting and exchanging data via connected software and sensors is very exciting to us. Narrowband - Internet of Things (NB-IoT) allows us to do just that. NB-IoT is a standards-based, low-power, wide-area network (LPWA) that makes use of existing LTE networks. Being part of existing LTE networks, companies such as Verizon, T-Mobile and Sprint will charge users a fee for use of their network infrastructures. The cost is expected to lower as the demand for devices connected to this network increases. The network provides anyone the ability to access a wide range of new IoT devices and services with faster communications than other IoT based networks such as LoRa. The main focus is on indoor coverage, low cost, battery life, and extensive connection density. The underlying technology benefits users with security and privacy, providing support for user confidentiality, authentication, data integrity, and equipment identification. If you are looking for a deeper dive into NB-IoT, our friends at Elektor take a deep dive into Narrowband Internet of Things (NB-IoT).

We've got you covered with boards, shields, and modules to get you started.

In telecommunications, broadband plays its role as a signaling method that administers a wide range of frequencies. The “broader” or wider the channel, the greater the data-carrying capacity. In order to accommodate higher data rates, like a security camera, higher frequency spectrum is needed. This also increases the power needed for transmission. The fact that broadband signals cover a wide range of frequencies means that filters are not needed to avoid disturbance. Cellular LTE networks utilize broadband as companies increase their standards for data transmission, e.g. 5G is capable of supporting millions of devices per square mile. Broadband 5G utilizes a router technique to access the Internet. Rather than connecting via a phone line or fiber cable, the router accesses the internet using 5G SIM cards providing coverage in densely populated areas. A television antenna is considered “broadband” because the device is capable of receiving a large range of channels and video data streams.

Compromises of Narrowband or Broadband

Just as stated in the beginning, there is no better frequency between narrowband or broadband, it really depends on the application needs. In fact, as infrastructers grow and adapt to be more versitile, applications will no doubt start to utilize both narrowband and broadband frequencies.

We'd love to hear from you!

Have you had a project where you had to choose whether to use narrowband or broadband? Have you created any hybrid systems? Let us know in the comments below!