New stuff, with a pile of new stuff on top.

SparkFun: One of the top Colorado Companies to Watch! And new stuff with more new stuff.

Very sorry for the site downtime early this morning. Thanks to our excellent IT staff, everything is back up and in working order now!

Did you know SparkFun was one of top 110 finalists to be named a Colorado Companies To Watch? Are we being watched for good or for bad? We're not sure at this point.

Rojas is working on some video sweetness. Checkout the recap of the AVC:

Really nice if you hit the HQ button ^

Speaking of AVC - Nathan will be chatting with the Make Radio folks this Friday (4/24) about the autonomous vehicle competition and other fun SparkFun facts.

I don't care what anyone says, there are two things that make a good project: blinking LEDs, and good buttons. This is a good, solid, nice feeling 12mm push button. Simple.

We are starting to roll out the Arduino Pros with ATmega328 support! The first to arrive is the 5V/16MHz standard. More coming soon! We also got the ATmega328 DIP with bootloader pre-burned.

This is a breakout board for the HTC ExtUSB connector that is found in phones like the Android G1. Opens up the hardware interface to any phone that uses the connector.

Here is a SMD DC to DC converter module that can deliver up to 5A of regulated output current. Programmable output via external resistor from 0.75 to 5.5VDC.

Here is an enhanced PICAXE28 chip with 8x memory and many additional features such as I2C bus support. PICAXE is a great entry level PIC microcontroller system, check out the complete line.

New tools for all of your electronic and mechanical needs; a reversible screwdriver and a hobby knife.

As circuits get smaller, eyes need to get better. This is a 10x magnifier that fits around your head. Our production shop uses these extensively.

The small connector above is a U.FL connector. This thing is tiny. Commonly used on the XBee modules as a reliable coax connector. The cable to the right is terminated as a U.FL to SMA. Keep in mind we also sell U.FL to RP-SMA, so that you can connect both SMA and RP-SMA antennas to the U.FL connector. 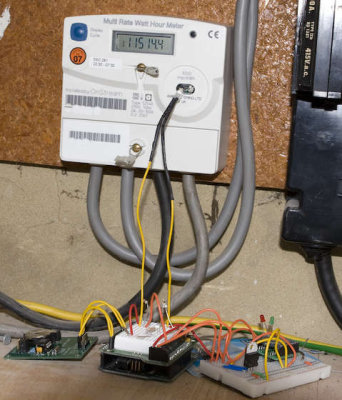 Watts-Your-Consumption: A UK wireless power meter built from SparkFun parts. Thanks Matt!
View Comments (15)
Share
Use this URL to share:

Back to the Grindstone: A Bunch of New Stuff