Check out these techniques for making your very own soft electronic components!

Let’s talk about soft and sewable hardware, or at least why I find it so exciting. Traditional hardware (like a button for example) is, well... materially hard, making it an awkward component in the context of wearables. At the risk of overgeneralizing (I see you, Iron Man), clothing tends to be materially soft by nature. This makes the relatively recent availability of materials like conductive thread and conductive fabric very compelling for DIY e-textile designers. Conductive thread and fabric can be integrated seamlessly (jk, by nature there will be a seam, but figuratively) to fabrics used for clothing. It infinitely expands the possibilities for wearable electronics. Today we are going to look at six easy DIY soft and sewable component techniques using these materials. In all of the examples below, the circuit is connected using conductive thread and includes a sewable LED that demonstrates the functionality of the component.

Before we get started, I have to mention that a few of these ideas were inspired by the work of Mika Satomi and Hannah Perner-Wilson on KobaKant: A site for DIY Wearable Technology Documentation. This website is an incredible resource for DIY soft and sewable electronics. 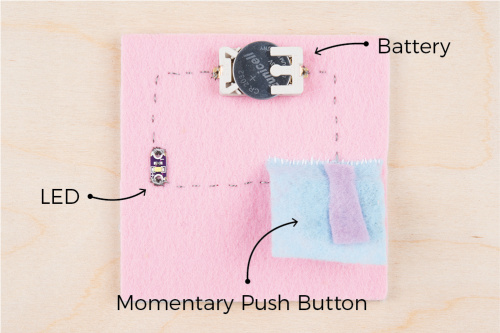 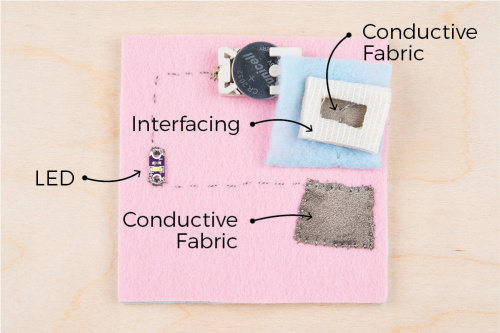 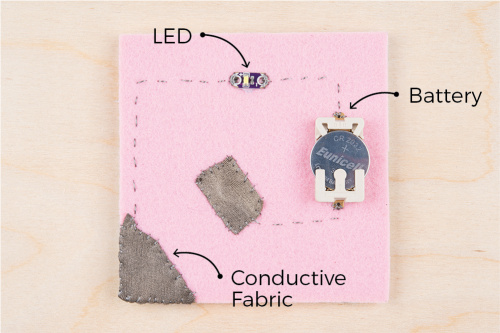 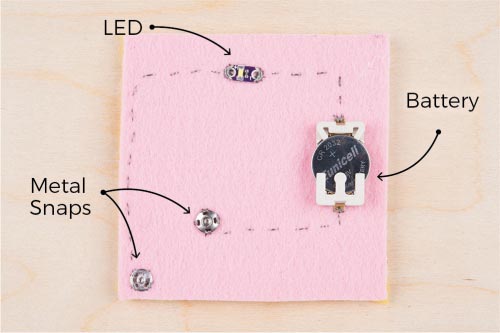 I love the switch example because it uses a very nontraditional piece of electronic hardware that happens to be a very traditional piece of fashion hardware: the metal snap. The snap is conductive, making it perfect for soft circuitry wearable applications. In this example, I have one half of my snap connected to my circuit via conductive thread on the corner of my felt swatch. The second half of the snap is also connected to the circuit an inch or two above and to the right. The space between the two snap halves breaks the circuit. When they are closed, they make an electrical connection and close the circuit. Because the snaps either stay closed or stay open, this technique simulates the behavior of a switch! 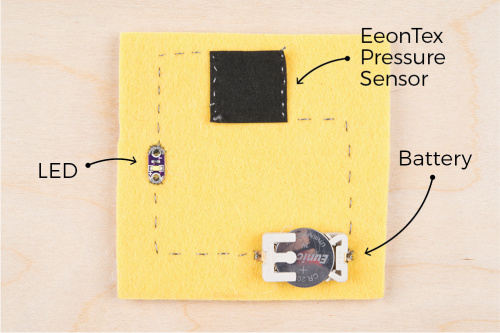 The pressure sensor uses a special material called EeonTex, which is a conductive, nonwoven fabric with Piezo-resistive functionality. It is used for dynamic sensors to map and measure pressure, bend, angle stretch and torsion. In this example, the circuit breaks across the EeonTex patch. Conductive thread connected to the circuit is sewn to either side of the EeonTex patch, which acts as a variable resistor. When pressure is applied or the fabric is bent, the resistance decreases, which increases the brightness of the LED. 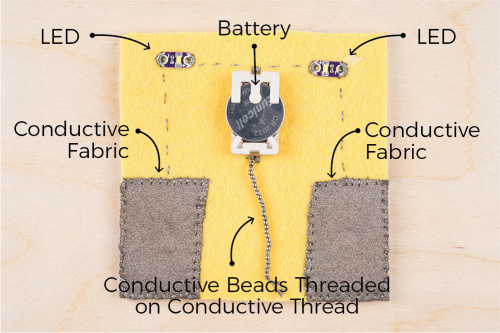 This is my favorite one because it’s a simple low-tech solution for a more complex sensor. On either bottom corner is a patch of conducive fabric, each connected to the cathode of an LED. (There are two LEDs in this circuit.) The LED anodes are connected directly to the positive terminal of the battery holder. Conductive beads are beaded on conductive thread that is connected to the negative battery terminal. When the circuit is tilted, the beaded thread falls to one side or the other. When the connection is made between the conductive fabric patch and the beaded thread, the circuit closes and the LED on the side of the tilt turns on, indicating the direction of the tilt. 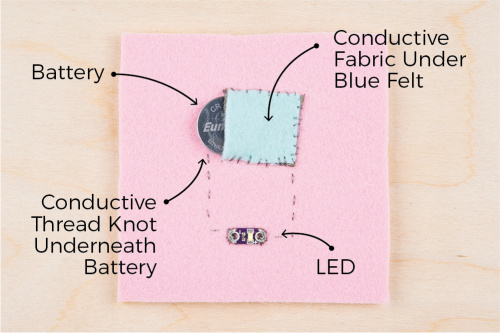 Shop supplies for your own DIY soft sensors here, be sure to visit our EDU blog post for more DIY soft components, and let us know about the soft sensors you have made in the comments below!