A heart-filled story of trials and tribulations with blue LEDs. 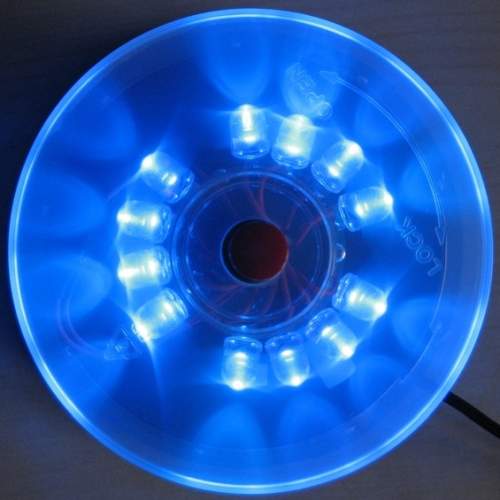 Here's a great story, submitted via the feedback form from Ryan, a SparkFun customer:

Several months ago I started dating a lovely girl from the next town over. Things went very well from the start, with one exception - she, being afraid of the dark, cannot sleep without the TV on, and I, being easily entertained and distracted, cannot sleep with the TV on. After a bit of disagreement, she proposed that I ought to purchase a night-light, and that might solve the problem. I asked her what kind of a night-light she had in mind, and she mentioned that it would be extremely cool to have a blue one.

Having just seen the killer blue LEDs on sale at Sparkfun, my brain starting spinning. I could purchase a boring, mass-produced night-light at the neighborhood grocery store for two dollars, or I could spend quite a bit more and order some fun new goodies from Sparkfun and design an LED-powered night-light from scratch.

Needless to say, I chose the latter. I purchased a fresh, new bread-board, some components, a bag full of those great LEDs, a few different proto-boards, new spools of wire and a few other odds and ends. Several days later, I spread it all out on my workbench and ended up creating what has got to be the most expensive, but certainly one of the most awesome, night-lights ever.

The circuit itself is dirt-simple, DC circuits 101 kind of stuff, but it works spectacularly, looks great, does an amazing job of lighting up a room, and has ended all disagreements about the TV.

...Plus, now my girlfriend thinks I'm some kind of genius. I showed her the schematic and insisted that it's the most basic of all kid stuff electronics, but she still thinks it's amazing.

Here's a link to the gallery of pictures I took of the project at various build stages: http://homepage.mac.com/geosword/PhotoAlbum17.html

Thank you a hundred million times Sparkfun! Your products and service absolutely rock, and I look very forward to the next thing that you and I build together. :)

You rock Ryan! Thank you so much for sharing your story! I wish we could all look so valiant in front of our loved ones. I am more likely to get a 'you're crazy' look as opposed to a 'you're a genius' look. Our hat is off to you sir!

The Flood of New