Director of Engineering Pete Dokter plots the data from a rocket launch - and suggests a new method for testing SparkFun products!

Anything you can strap to a rocket pretty much takes priority around here, which is to say that if someone is launching a rocket out back, everybody is coming out to see it. Sadly, such tests are few and far between. But if I had my way, every last product would have a ?rocket test? before getting posted for sale. If it?s too big or bulky to get it into a small rocket package?we need to get a bigger rocket. I don?t care if it has or has not sensors of any kind, launch it! The higher/faster it goes, the better. Bonus points for ?accidental? explosions. Get the idea?

But since, for some reason, nobody around here takes rocket testing as seriously as I do, I had to come up with something that would actually justify such a test. This all started out when we started looking at hi-g accelerometers some time back. What do you do with a 500g accelerometer? Turns out that the answer isn?t ?put it in a rocket?, unless you intend to crash it into something (not impossible, I?ll grant you). And that particular accelerometer was a serious pain to talk to, being a digital interface that required current modulation of the supply line ? argh! The next choice was a 250g analog choice, the Analog Devices ADXL193. After the fact, I can tell you that this was also a bad choice when launching in a small Estes rocket. There?s just not enough force to read, certainly not hundreds of g?s worth. The best choice ended up being the ADXL321, which reads +/-18g. 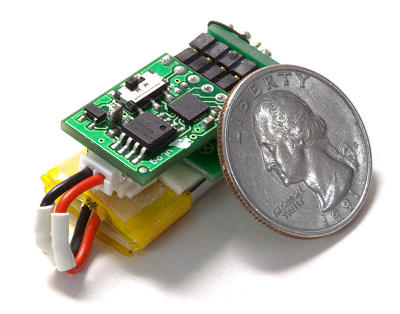 This is the uLog. It?s an ATtiny24 with a 16MBit flash chip, mated with an ADXL321 and a 100mAh LiPo. Sampling at 50Hz, it?ll log 3 channels of 10-bit ADC for about 2 hours before the flash fills up. At power up it determines if a UART line is attached. If there is, it spits out a ??? and waits for user input. There are only 2 commands: ?r? for read and ?e? for erase. Erasing the flash sets all addresses to 0xFFFF, and reading dumps all the data up to the first 0xFFFF. If there?s no UART line attached it starts sampling. Super simple, super stripped down. Total weight is 8.07 grams.

Just to prove we launched it, here?s a video:

Here?s the plot of the data collected. The blue trace is the vertical axis, the pink is horizontal. Click on the image for a larger version. 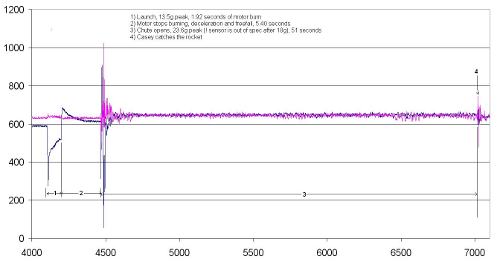 For those interested, a slightly more user-friendly version of the uLog will be offered for sale in the next few weeks. Check back next time when we build a trebuchet and launch a Port-o-Rotary phone!

Advancements in UAV Land, The Bokode Project, and Some New Stuff