Giving your Arduino the power of sight.

The versatility of the Arduino platform has been well-documented - by attaching various inputs and outputs to your Arduino, it is capable of a lot. But what if your Arduino board...could see? That's the goal of this project from SparkFun customer David Chatting - aptly known as the Arduino Eye Shield. 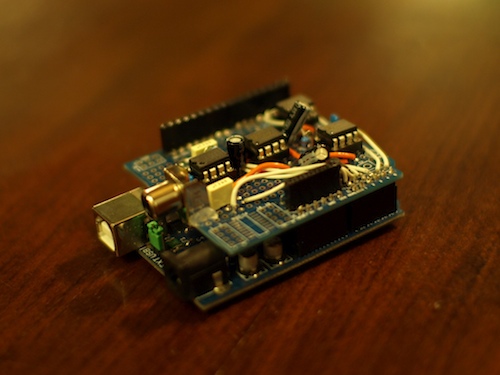 The Arduino Eye Shield relies on using certain types of video formats - namely PAL and NTSC. The reason is that these video formats have a fairly straightforward structure. Looking at lines from a PAL video, for example, it's not too difficult to make out the initial negative-going pulse, then a color burst, and then the picture information follows. So how does the Arduino Eye Shield use this information?


The first test of the Arduino Eye Shield.

First, an LM1881 video sync separator extracts the synchronization pulses from the video signal so the Arduino can identify a specific line in the picture. It takes at least 8 samples per line for the picture, and then a AD811 comparator sets the output high or low depending on if the video signal is above or below the reference level (which is set dynamically by the Arduino). It essentially does the same process for gray-level information, only this time with difference reference levels.

The results are pretty cool - the Arduino has eyes! This is still in the developmental phases, but there are definitely some very cool applications for this project. Great work!

Adventures in Science: Level Up Your Arduino Code With External Interrupts