Results from this past weekend's Autonomous Vehicle Competition.

As you may have heard, the third annual SparkFun Autonomous Vehicle Competition took place this past Saturday. As has come to be expected, it was an amazing day of robotics, camaraderie, and good ol' fashioned mayhem. We are going to post the entire recap video next week (there is a TON of footage to sort through), but we wanted to pass on the results and some of our favorite photos. 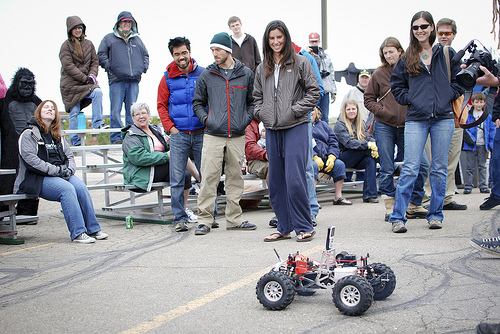 Some of the spectators take in the race. Notice anything strange here? Hint: it's a gorilla.

The day got off to a bit of a rough start as the weather was not exactly cooperating - it was cloudy and fairly cold, with a light snow falling. However, nothing could dampen the competitive spirit of the AVC and the event went on without a hitch. All in all, we had almost 700 people attend - by far the biggest AVC yet! 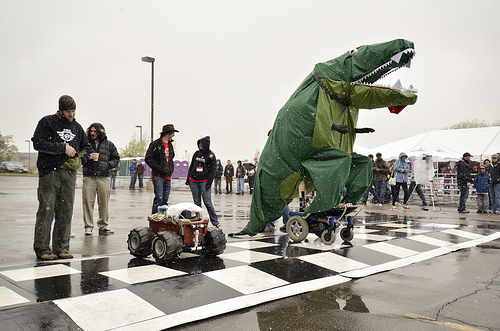 With thick cloud cover and rain/snow, many of the vehicles struggled to get a GPS lock. This made the course even more difficult than in years past and vehicles were struggling. The first bot to break through was Team Autocrusher with a time of 2 minutes and 4 seconds. This opened the floodgates, and as the heats went on, more ground vehicles were able to successfully complete the course. 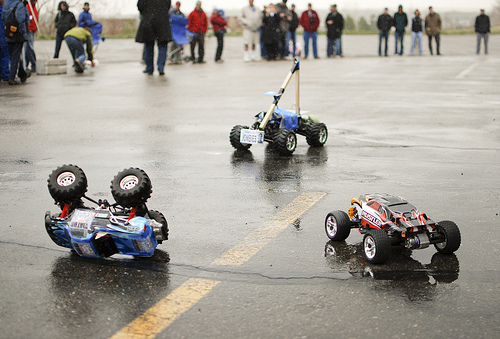 As far as aerial vehicles went, it was tough going all day as the clouds and weather wreaked havoc on the autonomous planes and quadcopters. Two teams, Death by Pinetree and Robota, would battle back and forth all day for the victory. 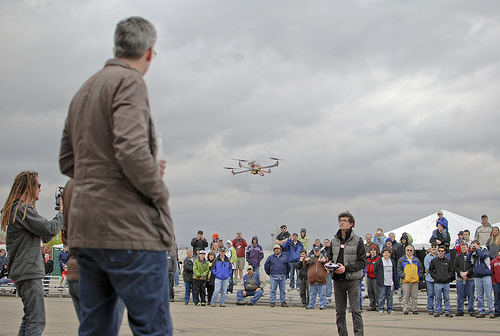 A quadcopter tries its luck.

Ultimately, Team Robota came out on top for the Aerial competitors and Team Tobor won the ground class, each taking home the grand prize of $1000. The other awards were as follows:

It was an amazing day to say the least and we are already looking forward to next year. Check out the SparkFun Flickr for more pictures and, as I mentioned, we will be posting up a recap video soon. Hope to see you all next year and thank you to everyone who made it out this time around - it was a blast!