Visiting the past, present, and future of SparkFun Production.

When I first joined SparkFun I was but a wee lad. Okay, I was 26 years old and 6 foot 3 inches tall...so not very wee or laddish. However, it does seem like a generation ago. But I digress. In those early days, in the early autumn of 2006 to be more precise, SparkFun itself was much smaller in scope than the organization that has since grown up around us. This is the story of how SparkFun's production crew has developed (some might say improved) over the years by taking chances, learning from our mistakes, and being willing to try new assembly methods, component types/packages, and processes… 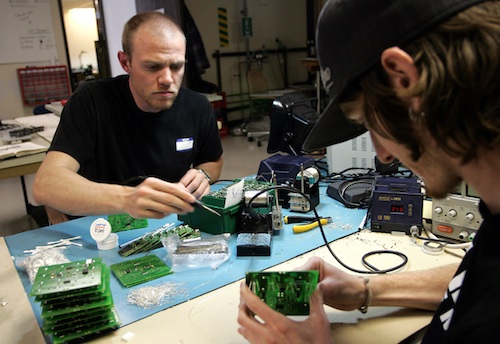 Tyler and I soldering away at our first production facility circa 2007.

Many of you have heard the story of the reflow skillet 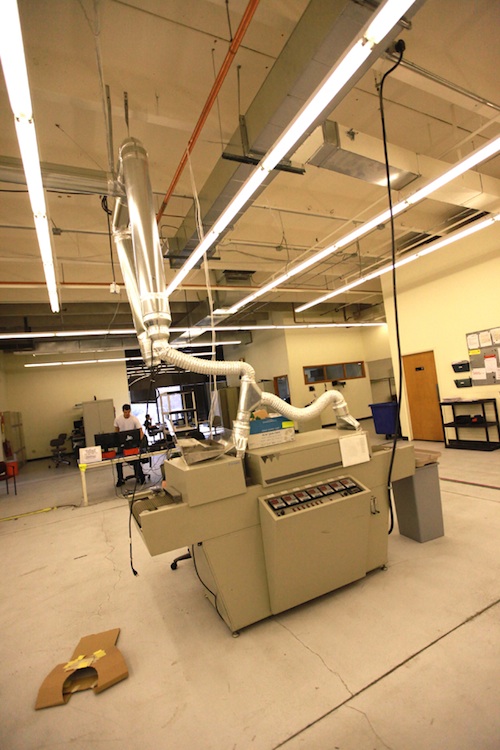 So what has changed since those early days? The basic concept of producing widgets that utilize small electronics components, custom designed PCBs, and some solder with a healthy dose of high heat really has not changed. However; the equipment we use has grown more complex and specialized, allowing us to build more intricate boards…and many more of them. The number of boards we now assemble on a daily/weekly/monthly basis is far greater than what we were capable of 5 years ago. So far this year (through the end of September), we have averaged the production of 14,000+ "widgets" (defined as everything from breakout boards to kits) per week. Whoa! Seriously?! I still have a hard time believing that we've scaled to this level in only a few short years. To offer a greater perspective, I recently found an old spreadsheet saved in some obscure folder on my hard drive that was once used to track our daily and weekly throughput and yields. Taken from this spreadsheet, for comparison purposes, consider that during the week of December 4th-9th, 2006, SparkFun made a whopping 458 widgets in total. So, defined this way, we’re now significantly more productive than we were back then. But if you look at the total number of boards we built that week, you’ll notice that only roughly 80% of what we actually built could be made to function. Again, for comparison purposes, our average yield throughout all of 2011 has been 99.58%! 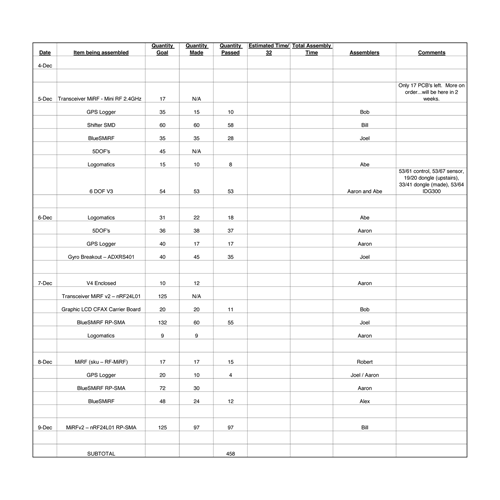 Additionally, the number of production employees, the number of components in our inventory, and the square footage of our workspace has increased, in dramatic fashion, during the last 5 years. I remember when our inventory storage consisted of a single bin storage rack on casters where we stored our PCBs and some wire shelving that held 3 boxes (Boxes A, B, & C) that each held a mish mash of random parts in their original Digi-Key packaging. Reels of components? Forget it. "5,000 0.1uF capacitors would take us forever to use up!" 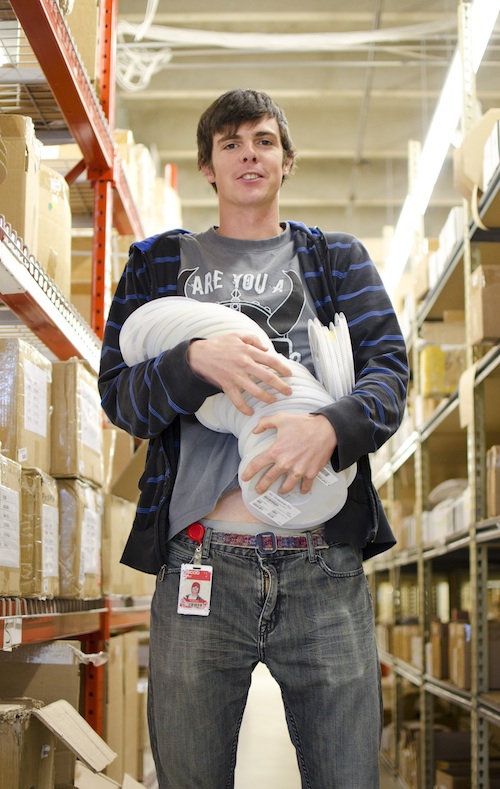 When I first started here, we didn’t have a SKU system to help keep our inventory organized. And our BOMs (Bill of Materials) were simply translated by hand from the assembly sheet that was printed from Eagle onto the margin of the assembly sheet.

But I'll never forget the time that Nate wanted to know why I was asking our purchaser to order 500 Bluetooth modules. Then when I showed him how many BlueSMiRFs we were building/selling per week, his jaw dropped and with a shrug of his shoulders he pulled out his credit card to make it happen.

My first year with SparkFun saw the production space consuming all of about 1,400 square feet. Back then, we looked a lot more like the few hackerspaces I’ve seen. A few tables, 3 or 4 computers for testing, some soldering irons, a wall of shelving that held our components and parts, a table in the corner to stencil boards on, a reflow oven, and a pick-and-place machine. To be honest, our feng shui sucked...and we loved it just the way it was! There was no assembly line. We didn’t have space for one! We just worked with what we had. 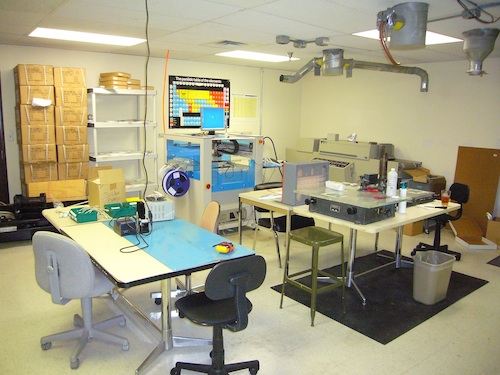 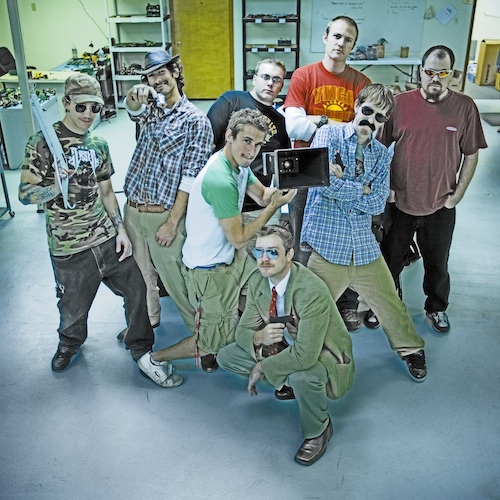 Guns not real. Mustaches however...

But as time went on and as our need for more space grew, we expanded our square footage and began hiking down the road of improved efficiency. It’s probably important to note here that some might see efficiency as a negative, a culture killer. But we try to look at improvements in the efficiency arena as improvements in the name of sustainability. We can’t really expect that moving to a larger space every 2 years is going to scale as well as finding smarter ways to utilize our space and time. At a certain point, some level of automation just makes sense. 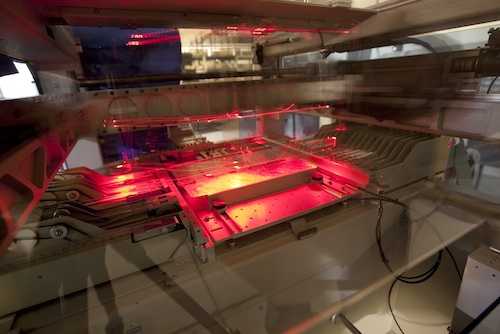 So in early 2007, we decided to explore the feasibility of and capabilities that a pick-and place machine could provide us. Apart from wanting to play with such an awesome machine, we were hopeful that it would also help us catch up to the demand of our more popular breakout and dev boards. Over the next 2 years, we learned how to use this machine and how to manage the production of a growing number of board designs by utilizing its speed and accuracy. We suddenly found ourselves in this strange hybrid space of medium volume assembly of some designs and resolutely low volume of others. And, all the while, the number of different board designs we assembled continued to grow on nearly a weekly basis. By 2008 we had started up a full night shift operation of the pick-and-place (PnP) machine. And then in late 2009, we brought on a second PnP machine because we were struggling mightily to keep up with the growth in demand of SparkFun designed and built boards. Our two PnP machines (Optimus Prime and Megatron) are run each day and night by 6 incredible guys whose attention to detail results in extremely high quality board assembly, often with very little touch-up rework required. 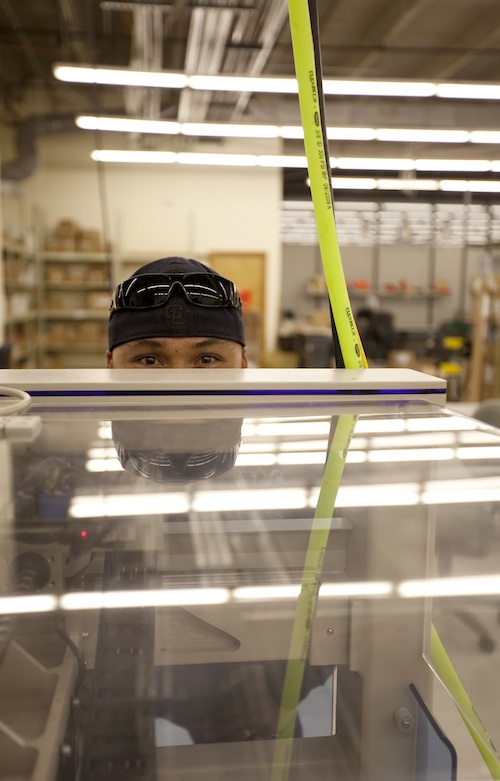 Gerry makes sure Optimus Prime and Megatron are running at top speed every night.

Just as automated assembly was a monumental shift for us back in ‘07, we experienced an equivalent paradigm shift during the same year when we made the decision to start building kits as part of our assembly line-up. Up until that time, we already were selling items that were kits at their very essence. But they weren’t being pieced together until an order for one was placed. Managing kit products this way was slowing down our shipping department. So we welcomed a couple of kits to our production family. But in 2009, we decided to really put our money where our mouth was and hired our first full-time kitter. There is another blog post currently in the works that will share more details about the development of our kitting operations. But I will say this about our in-house kitting operation...kits and retail products now constitute 30-40% of the total number of widgets built at SparkFun every week. Our kitting crew members do an amazing job, putting together thousands of kits each week with a relatively very low error rate! If you’ve ever wondered what it would be like to build SparkFun kits all day, here is a speedy look at a typical build of 25 retail-ready SparkFun Inventor’s Kits...!

But lest we forget our roots...it’s important to return to the idea that SparkFun’s own production capabilities came about because it was important to us to be able to try out circuit board assembly for ourselves and share with the world what we learned along the way. We continue to pride ourselves on our ability to stencil, populate, and rework (by hand) every board built here at our home base in Boulder. And while we’re still capable of truly hand-built boards, our extremely talented assembly technicians have done an incredible job of adjusting over the years from doing a heavy amount of hand populating boards to becoming experts in testing and rework so that they can keep up with the pace of our two pick-and-place machines that are each running 80 hours per week. 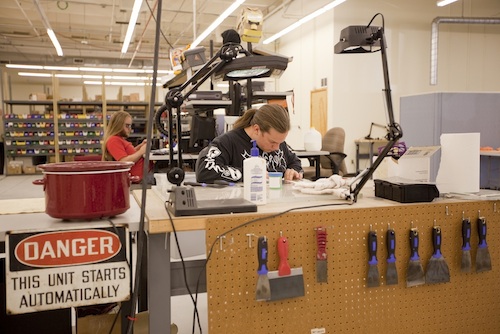 And, while we’re on the topic of testing, we continue to see many of our most significant efficiency gains realized because of the continued improvements being made by our test developers. Whereas, we once had a few different testbeds built up that would test a handful of different boards. Now almost every board design has its very own unique testbed, most of them cleverly designed pogobeds. 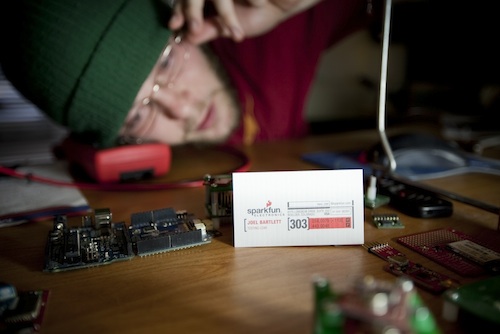 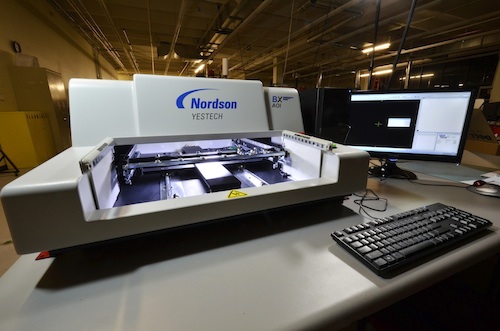 As we've grown and progressed, we've continued to redraw the lines for both what we are capable of and what we want to be. In the small electronics assembly world, success or failure can be defined in a number of ways. Are you building your widgets cheaper and faster than everyone else in the world? Will your customers know you for having the highest quality boards and kits? Or do you have the capability to spin up custom built boards to someone else's precise specifications…while also doing so cheaper and faster than the next guy? Most likely none of these statements apply to us, though if I had to choose, I would love for us to be viewed as a top quality manufacturer. But I do believe wholeheartedly that we have built up a strong connection to the end users of the widgets built here within the four walls of 6175 Longbow Drive and that this connection and the way we offer up genuine support to this unique community is what continues to set us apart from the more advanced contract manufacturers out there. This community support plays out in a number of tangible ways: teaching what we've learned about PCB assembly through soldering and stenciling workshops, opening our doors to the outside world as often as possible to anyone interested in seeing our hard work in action, and posting tutorials on how we test 100% of our assembled boards via uniquely custom designed pogo beds. Like the rest of SparkFun, we are more than happy to share what we've learned and are even open to telling you where we messed up in the process, painful as that may be sometimes. 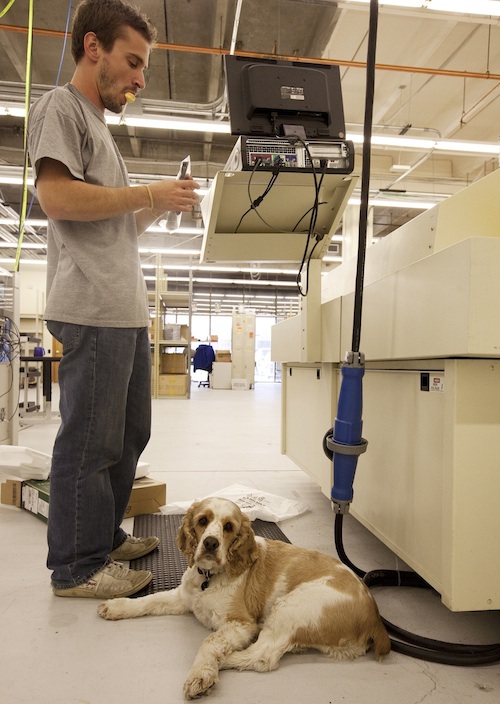 If I had to narrow down our list of lessons learned to a top 5, I think it would look something like this:

Despite the fact that we now use some very complex and fun equipment, like pick & place machines, reflow ovens, a PCA (printed circuit assembly) washer / defluxing system, and automated optical inspection (AOI) machine, to assemble SparkFun goodies; our team of creative, talented, and fun individuals love that we continue to have the opportunity to personally build up the boards and kits that you all love to play with. And we're excited to play our role of support in enabling you to dream bigger and to create what hasn't yet been invented for an application that is unique to you and your own adventures or challenges! 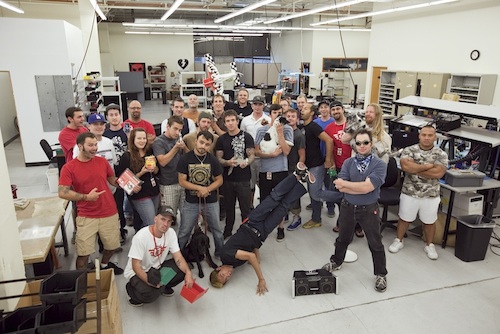 It’s very likely that I didn’t answer some of the questions that many of you might have. I’ll do my best to answer any questions posted in the comments below. And, perhaps more exciting (for those of you geeks that would love a little more dialogue on manufacturing processes), our IT crew is currently working on an expanded blog system that will create more avenues for generating content to share with the SparkFun community. This will pave the way for more production-related info to be shared with the world...

To end on a high note...back in March of this year, we delivered to “the storefront” the millionth widget built here at SparkFun! It was a milestone that we celebrated in true SparkFun fashion. And we’re already looking forward to 2 million (nearly halfway there already!)...

Open Source ALL the Things!