Free Day 2013 has come and gone right under everyone's nose. Insights into US lottery law and the latest on education tours in the future.

Free Day is a strange beast in the SparkFun menagerie. It started in January 2010 with $100k in free orders in a mad rush. A year later $150k in promo codes went free in an equally mad rush involving customer seniority, quiz questions, and a hefty kick to charity. Some of you may remember January 2012, our third Free Day, as a $200k purgatory of Captchas driven by a Geiger counter.

Obviously, Free Day is a shape-shifting beast. Every year the stakes get higher, and every year a flood of ideas is ultimately condensed into... something. Free Day's fourth incarnation went by several names:

And, yes, it's already over.

More on Free Day's abrupt end below. First, here's how it worked. To capture some of the zing from the inaugural Free Day, we ditched the promo codes and went right to orders being placed for free. Eligible orders (customer and educator credit card orders between $50 and $500) would trigger a random number generator for a chance to win. Winners would see this: 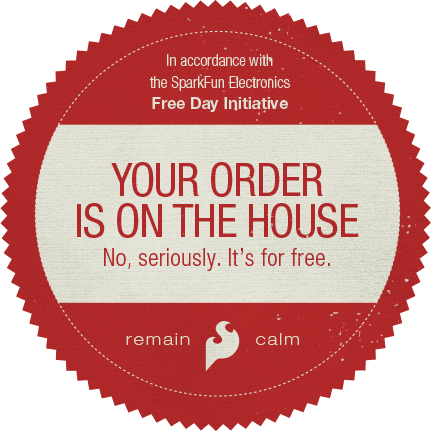 Free Day even had an official seal this year.

And their card would not be charged. Their entire order (shipping, tax, and all) was totally covered.

Every Day Is Free Day was shut down on its 40th day (December 18, having started November 9th). What happened?

A Primer on US Lottery Law

Before diving into the early shutdown, it's time for a disclaimer: I'm not a lawyer. Nobody at SparkFun is. Like many companies our size we do have a lawyer on retainer, but sweepstakes are not his area of expertise. Regardless, only after Free Year was up and running did the word sweepstakes pop up and prompt the question: Is Free Day completely legal? In retrospect, this is a question that should always be fully explored before launching into a thing, but Free Day never carried a seed of doubt before. This time it did. So everyone began digging.

It was around the time that we were really learning a thing or two about US lottery law that I decided to have Free Whatever the Days It's Called shut down. We had yet to advertise or even announce the event. It was clear, however, that doubt had clouded the event, and none of the many ideas put forth to spin it in different ways were adding clarity. Just to be safe: off it went.

Now, technically Free Day is a lottery. US law defines a lottery by a simple formula:

This describes all lotteries, legal or otherwise. In order for the contest to become a sweepstakes, a type of contest which is far less regulated, one of the three elements of a lottery must be neutralized. It's your classic triangle you-pick-two problem: 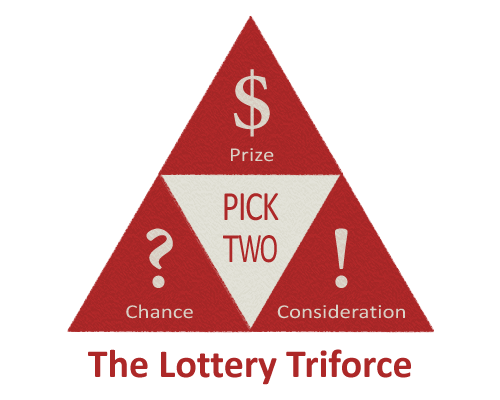 Not as cool as Wisdom, Courage, and Power.

Prize and chance are straightforward: winnings and randomness.

Consideration is more nuanced. It's basically the barrier-to-entry. A contest in the form of a sweepstakes neutralizes consideration, resulting in a prize offered and awarded by random chance with no barrier-to-entry. We've all heard the phrase "No Purchase Necessary," and that's a telltale sign of your standard sweepstakes; you can enter by buying something, or by a simple, free means of entry. Officially, this is called an Alternate Means of Entry (AMOE). All the best sweepstakes have them.

Free Day didn't appear to have an AMOE. Did it need one? I don't really know for sure; I'm not a lawyer. We could add one, I suppose... but how would that change the game? How easy does it have to be? The only hard-and-fast rule about AMOEs I could find is this: The odds of winning by purchase should not exceed the odds of winning by AMOE. I welcome you, dear reader, to calculate the odds of the contest as described and try to construct your own AMOE to make it work. As you'll likely find, things begin to look very different very quickly. Don't forget to put yourself in the shoes of a computer-savvy hacker type looking to milk the system for all it's worth!

Ghosts of Free Days Past

Now then, knowing what we know now, what of Free Days past? Were they all fair and square under these rules?

I would argue that Free Day Classic was fair because chance was effectively eliminated. Consideration was certainly present, as purchase was required for the prize of a free order, but given that anyone who got their order through got the prize, any chance was left to elements beyond our control, such as latency to our servers from wherever an entrant lived. But maybe that is still chance. Oy.

Free Day II - the year of the quiz - well, again the chance-neutral argument could be made because there was no drawing of any kind. First folks through got the prizes. Consideration was considerably less as well, since all purchasing was removed from the contest. But consideration can be more than money, because time also has value, and time spent answering quiz questions can potentially be a barrier-to-entry worthy of being considered consideration.

Free Day III was hallmarked by the truest random chance ever in the form of an elaborate Geiger counter setup. Players could enter as many times as they liked by entering a Captcha and clicking a button. It was by far our lowest barrier-to-entry and was uniform for all players, so I think here we can make the strongest case for appropriately neutralizing consideration. But would that stand up under true legal scrutiny? Let's hope we don't have to find out.

So were the past three Free Days all legit? Probably. Lottery law is, however, not cut and dry.

Every Day Is Free Day - Results

Over the forty days that Free Year was able to run we gave away $21,536.53 to 153 customers in 15 countries. Though most were in the US, some winners were from as far away as New Zealand and Nigeria. As all Free Days are a trove of fun data to visualize, here's Free Year at a glance. The red dots signify final orders for a given day. 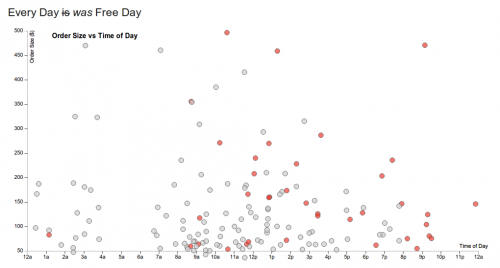 Attempting to fit a trend line to these data is inadvisable.

So, what next? Will Free Day 2013 return in some other form?

Officially, no. Free Days take a lot of energy and resources to put on. Especially given what we know now, a future Free Day should be free of any legal doubt, and that takes doing some homework. There are too many other moving pieces to dive back into that gauntlet just now.

In light of these events, SparkFun may be a tad gun-shy about games like Free Day in the future. We're not a tiny company operating out of a closet anymore, and we've been targeted by legal proceedings in the past. Out of self preservation we need to be careful and diligent.

Now, that's to say nothing of the many irons in the fire that will also make the average SparkFun customer a happier camper. Things like broader [same-day shipping](https://www.sparkfun.com/static/customer_service#Same-Day Shipping), bringing back free shipping in some form, and a full-on customer appreciation program are all on the horizon, along with continually improving content like tutorials, projects, and tear-downs. We can do those freely out of love for you, the community, without getting all nervous about legal murkiness. As head of the development team at SparkFun I can also tell you those are way more fun and rewarding to work on than Free Days (which tend to be grueling slogs).

How this all ties in with KickStarter and the National Tour

One of those other moving pieces happened to be the SparkFun National Tour KickStarter Campaign. It was an ambitious project to crowd-fund $150,000 to teach 50 Intro to Arduino workshops to teachers in schools across the US, leaving behind 50 SparkFun Inventor's Kit Lab Packs for years of students to learn electronics. Many contributed, but ultimately the campaign failed to reach its goal. The community spoke: If we really want to do this, we had better fund it ourselves.

So, no grand announcements yet, but we will be touring in 2013, using those same Free Day funds to invest in schools around the country and beyond. Running the KickStarter campaign was an illuminating experience. In the process, we were able to reach interested tinkerers we had never reached before. Connections have been forged with previously unknown schools and libraries who are excited and passionate about what we can do together. Canada - my goodness Canada - a country so progressive in electronics education, answered our call but were de facto excluded since it was to be a US tour. Now, free of self-imposed restrictions, we can get there in 2013.

I'll leave the rest to our growing Department of Education to expound upon as details gel. Suffice it to say, this turn of events has been strange and at times unnerving, but 2013 looks incredibly bright.