SparkFun at Make a MakerSpace, hosted by Artisan's Asylum, Part 2

In January 2013, SparkFun education and engineering went to the Artisan's Asylum in Massachusetts to offer a large amount of support for their educational track. This post is all about the event and ancillary events we did on either side of the weekend while in the Boston area.

Day two of Make a MakerSpace found the Lindsays of SparkFun splitting up to offer two different workshops. My boss, Dr. Lindsay Levkoff, talked about hands-on education along with people like Chris Rogers from Tufts University. They played with Legos and discussed pedagogy while I led seventy-five people in learning the five foundational Arduino skills with our LilyPad Dev board. If you haven't heard of it, as an educator, I love our ProtoSnap line. It's the only way I know of to teach Intro to Arduino in under two hours. Here's one of the ways SparkFun Education does it. We slammed through blinking and fading an LED and digital and analog input with buttons and photoresistors, with plenty of time left over to talk about Processing and make a really bad dubstep instrument using the tone() command. After the workshop we hung out with people like Tamara from Brown Paper Tickets, Juan from Burgath, space founders Mike Kaltschnee and Mark Barnett and a slew of other educators from all over the nation. I even happened to bump into Amon from MODKit and I was once again able to express my gratitude for the teaching tools he and his team have created over the years. 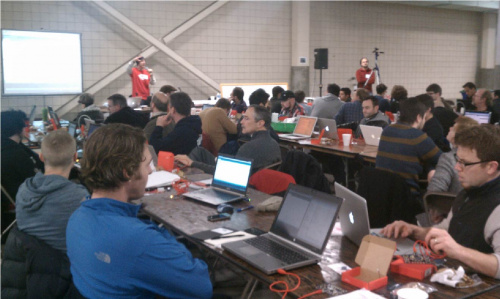 Monday morning, Chris Taylor and I headed over to Harvard Engineering to tour their Undergrad Engineering labs - wow! We got to see a whole bunch of really cool equipment that students have access to starting freshman year. Talk about interdisciplinary - these guys use electronics and computers as a platform to explore a wide array of topics. They showed us a bunch of areas including the lab that they use for energy transfer education. Among the hardware in that room was a wind tunnel and solar simulator for use in their Heat Transfer class. We poked our noses into the tunnel, drooled over various setups and continued the tour. Chris was especially impressed with the cleanliness of their manufacturing labs. One of them had something like five 3-D automated mills, and there was not a single speck of sawdust or metal shaving in evidence! Near the end of the tour they showed us one of their innovations, the result of three summers of work. They were very proud of the micro-fluidics system they had designed to help researchers work with DNA. Again, we got to see a space where innovation and rapid prototyping are bringing down the cost of cutting-edge instrumentation by tenfold or more. 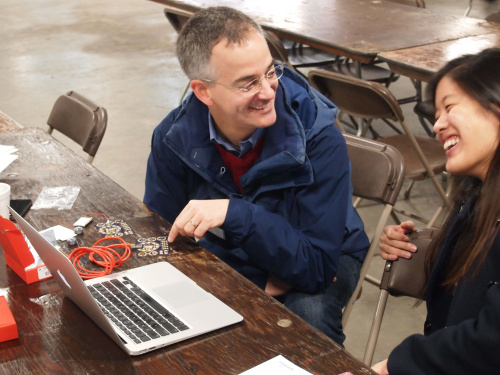 That evening everyone headed back to You-Do-It-Electronics for our final workshop on the trip. We were given an example of how one of their long-time customers created a new contact/point system for use in professional fencing with e-textiles. It's amazing what happens when you give new materials to innovators and engineers. We had never seen that particular use of conductive fibers before. Touche, Mr. Z, and thank you for sharing.

The last place I toured while in Boston was the BU Electronics Design Facility. They create all sorts of cool instrumentation that winds up all over the world, as well as in BU classes. They also teach soldering workshops to younger kids as an outreach program. Seems natural that we should hang out, right? They showed me the persistence of the vision boards they used last time they taught their class, as well as lamenting the rocky road of technical educational documentation. This is a song and dance SparkFun understands very well. The students in the lab were motivated engineering students who frequented at least three different Hacker and MakerSpaces! In particular these guys were psyched about their Rocket Propulsion Group. This Facility even has instrumentation in CERN! They were busy working on updating that particular set of sensors in preparation for CERN's offline expansion/maintenance period over the next couple years.

As usual I walked away from this conglomeration of events and workshops with a new scope for consideration. I keep walking into amazing labs and learning environments where people are pushing the boundaries of our old systems. Whether it is learning more about physics and how particles work, or learning more about playdough and how people learn, it's of utmost importance that we all have a place we can push these boundaries. It doesn't matter if you're changing the way people use Arduino, introducing people to homemade fudge or maybe creating high-quality recurve bows, there's a place for you in a space out there. If you're doing all three of these things in a single project please let us know! 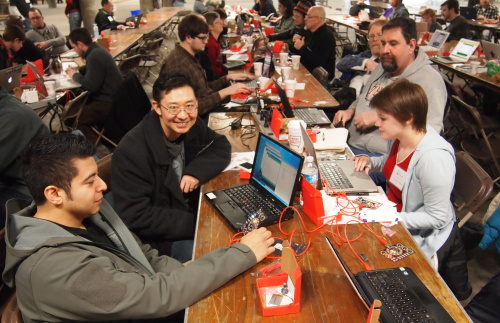 If you run a space and want us to visit hit us up! If you're interested in where this conference is going in the future, you can find the official website here. No matter who or where you are, if your garage is stuffed to the gills with electronics, a 3-D printer, woodworking tools, musical instruments or painting supplies, don't stop building, creating and making. Just think about moving your stuff to a place where like-minded creators can share and exchange knowledge. And if you can't find a place... think about starting one.

SparkFun at Make a MakerSpace, hosted by Artisan's Asylum, Part 1