A few us from engineering got to attend the Consumer Electronics show in Las Vegas earlier this month. Here's some of the stuff we can show.

Earlier this month, the Consumer Electronics Show in Las Vegas went down. For the first time, SparkFun attended in an official sense (as attendees). Pete, Dia, and myself represented Engineering, while our new head of Marketing, Jess, attended on behalf of her department. In addition, Nick W. and Pamela represented the mad scientist delegation and Casey K was there to demo his hacked WowWee (post coming soon). Over a period of three days, we were only able to scrape the surface of CES.

So, the first thing you need to know about CES is it's HUGE. It covers three locations, was expected to draw 150,000 attendees, and had over 3200 exhibitors. The larger consumer electronics companies even had separate meeting rooms for any meetings going on during the conference. I was able to glimpse in a few as I walked down a hall, one of which had a temporary decorative fountain installed. To give you a better idea of the size, the larger exhibitors had booths that were comparable to your standard big box retailer (you could fit an electronics store in some of these). Needless to say, we were getting our 10,000 steps in each day and some learned comfortable shoe lessons rather quickly. 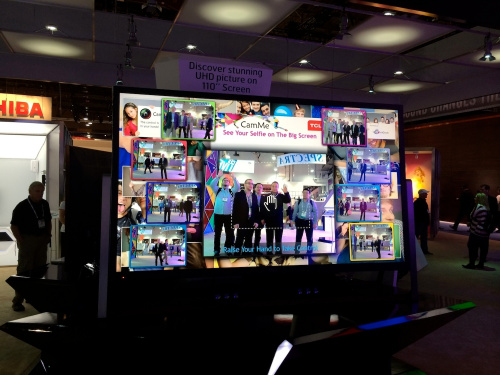 Obligatory CES giant LCD screen photo, can you see me on the screen?

A big question you might be asking is, "Why were you guys there?" I admit, it's not really what you think when you think of SparkFun. But there were good reasons for us to go. While we weren't looking for products to sell (although we found some), we were looking for technology to sell. We were looking at each product with the mindset of how could we have helped them prototype this. Additionally, we wanted to find ways to get the latest technology featured in these products in the hands of hobbyists.

My interest in us attending actually started with the release of Coin. I was blown away by the technology behind that product and immediately tweeted about it on the SFE Engineering account. Soon after, I was receiving comments about how that was being demonstrated at the last CES. I immediately felt like I had failed at my job. I'm the tech researcher; I'm supposed to know about these things. So when the opportunity for some of us to attend came up, I immediately volunteered myself (and you are correct if you assume this wasn't just work-based enthusiasm). Soon after, I had roped Pete in and we were on our way with the others to CES.

So what did we see? As we're not in the usual consumer market, we had a bit of a different perspective on CES. As I mentioned above, for us, it was about the technology instead of the products. We started off in the Venetian portion of the show. It was away from the rest of the show and had a lot of vendors that were more our speed. Within an hour, the trip was paying off. The Venetian show floor was full of components dealers. I was able to find two components I've been looking for over a year in less than 30 minutes. Even better, there were representatives at each booth eager to work with you. There was no sending an email and hoping to hear back or wondering if the part is indeed what we were looking for. We spent about 3-4 hours in the Venetian and were only able to see a portion of the exhibits. Yet when I sat down for lunch, my backpack was already full of pamphlets, brochures, and business cards from companies I intended on following up with as soon as I got back. 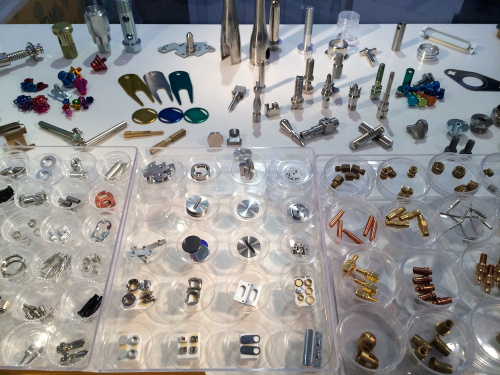 The following two and half days were more of the same peppered with meetings. I would have an hour or so between meetings where I got to check out the floor, then head to the next meeting. Some of the meetings we had a room for, others we had to find a quite corner to go sit in. I did my best to tweet the cool stuff as it came up and tried my hardest to see everything. Yet I got back to Colorado and read about awesome stuff in blogs that I had no clue were there.

We saw a lot of familiar faces and friends as well. Companies that used our parts for prototyping, companies that supplied parts to us, and even people just reading our badges (a guy did a double take on the escalators when he saw Pete). 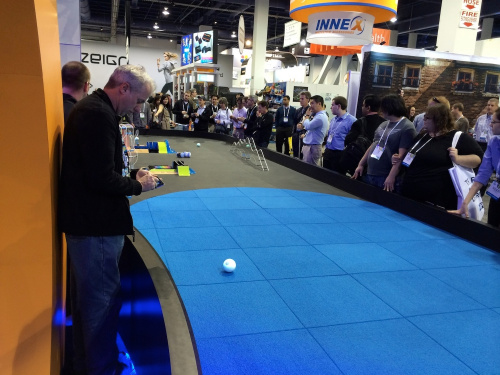 Sphero booth, where they were showing off their new model. I'm fairly certain it could put a hole in dry wall, so check it out.

I don't want to get too far into this as I am sure others want to share their experience (also I'm writing this the morning it's supposed to go live). There will be more posts on our adventures in Vegas to come. In addition, there's some awesome happenings coming out of CES for us, so keep an eye out for those. I can't say if we'll be back next year, but I sure hope so. I think we as a company, and you as the customers, will benefit from it.

Now for what everyone has been reading the article for. Photos of what we saw: 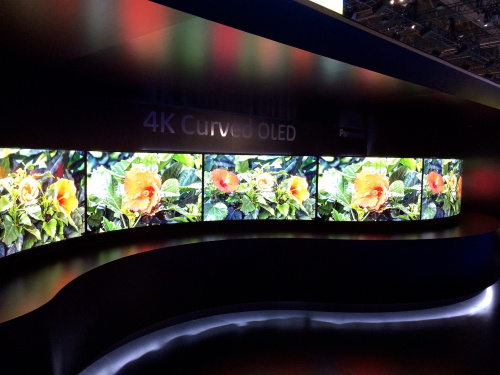 That's one way to display your new curved LCDs. 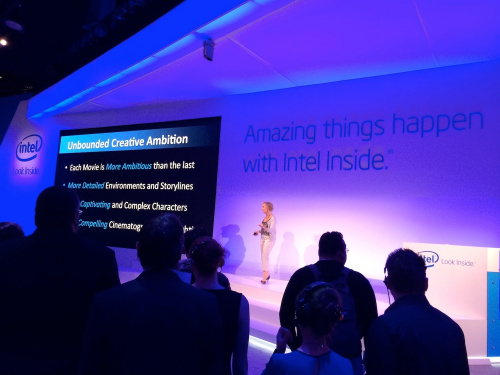 Intel was doing some awesome augmented reality stuff using the big screen on their stage and tablet PCs they handed out to the audience. 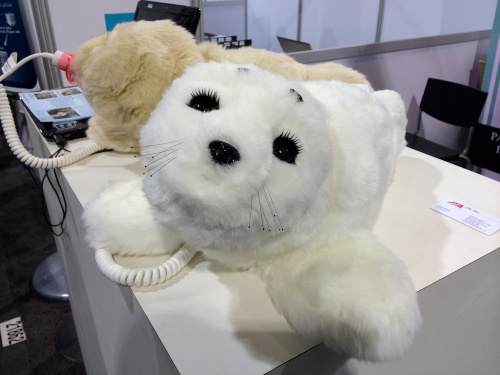 Paro is a therapy tool. A way for those who can't have pets to have a pet. Also it's adorable. 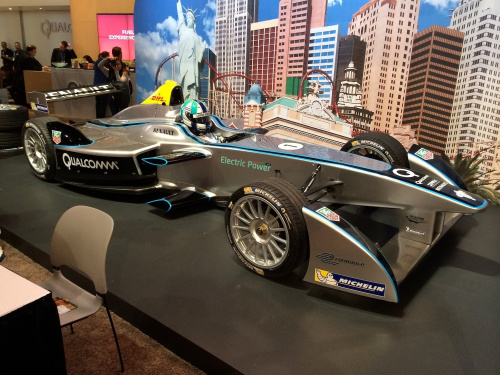 Qualcomm brought their Formula E car, which is a fully electric open-wheel racer. The race series starts later this year and should be fun to watch. 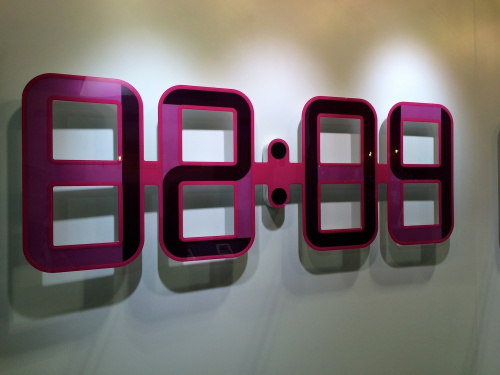 E Ink is never not cool. This wall clock works on a standard coin cell battery for over a year. 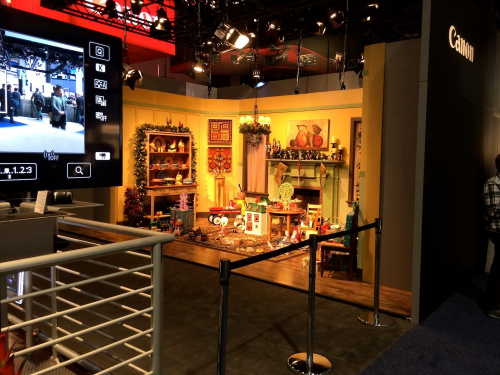 One of the more interesting attractions. Some of the camera companies had setup sample scenes for people to photograph with their demo cameras. 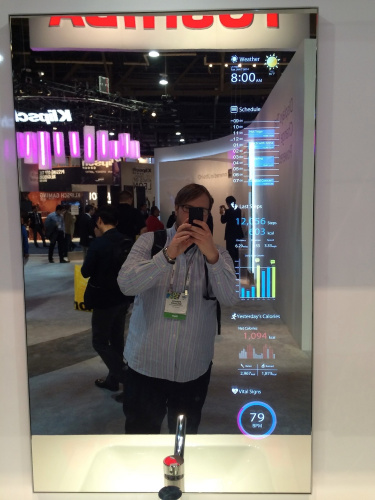 This LCD from Toshiba would sure go well with one of the new fitness wristbands on the market. Makes it harder to skip the gym when it's all in front of you like that. 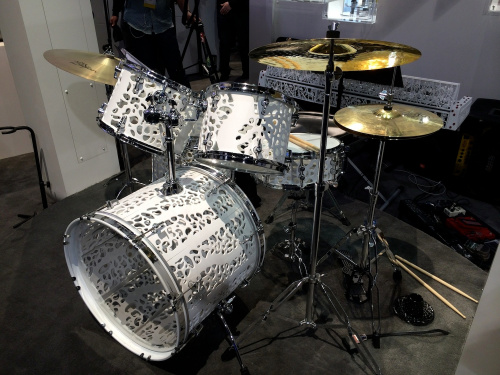 I don't want to say 3D-printed as I am not sure how they were made. But I can say these rapid prototyped instruments are playable.

Keep a lookout for more CES posts and hope to see some of you there next year, whether it's showing off your new product or getting your new service out to the market!