Enginursday: The Sky Is No Longer The Limit

CubeSats will soon be traveling beyond LEO, and are available in a new compact size. We check in with the people pushing the limits. 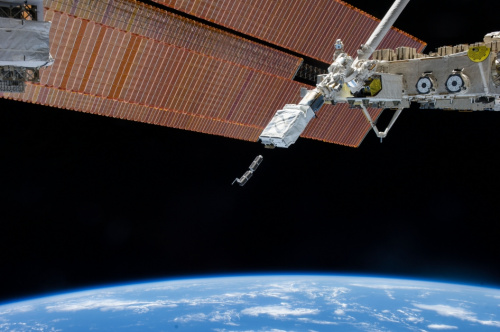 There is a (small) revolution underway in space.

Rocket science dictates that the cost of sending something into space is proportional to its size and weight. The smaller and lighter you can make something, the cheaper the uphill ticket will be.

At the same time, modern microelectronics, the kind you find in your average smartphone (or on this very website), are increasingly allowing devices to be built that are smaller, smarter, cheaper, and use less power.

The combination of these trends has led to a revolution in spacecraft design. Ten-centimeter "CubeSats", first proposed for student missions by Jordi Puig-Suari of Cal Poly and Bob Twiggs of Stanford, have become an industry standard with a rich and growing ecosystem. Today anyone with a sufficient bank account can buy off-the-shelf CubeSat hardware (and even launch services) from a number of vendors. The advantages are obvious: just as we've seen with Arduino, life is much easier if you don't have to reinvent the wheel each time you start a project. And like Arduino, the small spacecraft field is evolving at a breakneck pace.

With this in mind, we recently attended two unique spacecraft design conferences, to see what the people on the cutting edge have been dreaming up.

Back in April we attended the Interplanetary Small Satellite Conference at the Caltech campus in Pasadena CA. This small conference (less than 100 people) is only in its 2nd year, which illustrates how new (and audacious) the idea of small spacecraft in deep space really is. 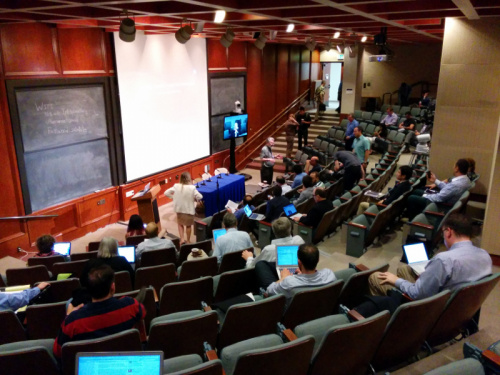 Small comes with its own set of thorny engineering problems, which are exacerbated the further out you go. But the more down-to-earth reality of shrinking budgets and cancelled programs have made the space science community realize that it's either go small, or not at all. "Flat (budgets) is the new up" says NASA Ames' Matt Sorgenfrei. "Nobody is doing billion dollar missions. It's time for this community to grow up."

Many of these engineering problems are related to aperture, or the surface area you have available to transmit or receive energy. For many of the subsystems on a spacecraft, aperture is everything. You want your antennas, solar panels, science instruments, etc. to have as much active area as possible. The larger the area, the more energy you can gather, transmit, or detect with your instruments. Unfortunately, surface area is in very short supply on a small spacecraft.

And design margins that are perfectly adequate for low earth orbit can be mission-ending in deep space. For example, in order to establish a reliable communications link, you need enough transmit power and antenna gain in both directions to pull your data out of the noise. Distance is one of the factors in this equation; the further away you go, you'll need some combination of more power, higher antenna gain, or lower bit rates to close the link. We can still talk to the Voyager spacecraft, currently almost 20 billion km away, because we can make up for it on the ground side with the monstrous Deep Space Network (DSN) antennas. But few people have access to this resource; there's never a 70m dish around when you need one. 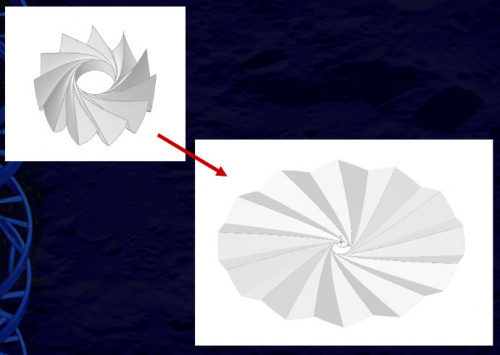 But engineers love a good challenge and this community is no exception. One solution to the aperture problem involves clever mechanisms that inflate or unfold like origami, effectively turning a small spacecraft into a larger one. Other solutions involve exotic communication systems such as lasers. But an even more fascinating approach is to fundamentally rethink mission design in terms of constellations of multiple small spacecraft, all serving as sparse elements in a huge virtual aperture. All of these topics and more were discussed at the conference.

It's not all talk. As noted above, NASA and others have seen the writing on the wall, and are retooling their design centers to support small spacecraft. NASA Ames, who have recently been building CubeSats out of smartphones, is managing a trio of deep space missions based on a 6U CubeSat chassis. (The basic 10cm CubeSat unit is known as "1U". This unit can be multiplied in any dimension to create larger spacecraft. The 6U (2U x 3U) spacecraft used in these missios is about the size of a briefcase.) All three spacecraft will piggyback on the first flight of the new Space Launch System in late 2017. The EM-1 mission will send an unmanned Orion space capsule around the moon and back to Earth; at some point between the Earth and the Moon the three spacecraft will be deployed and proceed on their own. 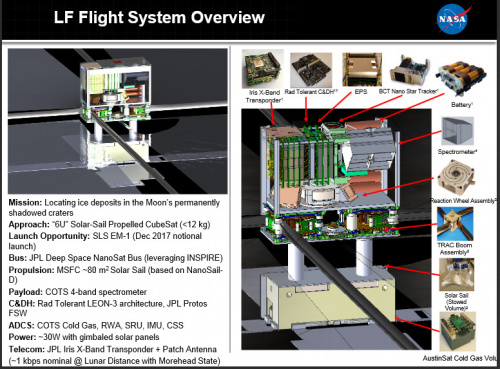 The three spacecraft have very different missions, but are based on common hardware which cuts development costs immensely. "Lunar Flashlight" will deploy an 80m2 solar sail, use the sail to maneuver itself into polar orbit around the moon, and will then slew the sail like a mirror to reflect sunlight into deep polar craters that are in permanent darkness. It is believed that these craters hold a significant amount of water ice, deposited by passing comets over billions of years. The reflected sunlight will be analyzed by onboard instruments to see what's down there. The second mission, "NEA Scout", will also deploy a solar sail. It will use it to slingshot past the moon, and attempt to rendezvous with a near-earth asteroid (NEA). The final mission, "BioSentinel", will also fly by the moon, and perform long-term testing of biological samples in the high radiation of deep space. This information will be valuable to researchers planning to send humans to Mars. 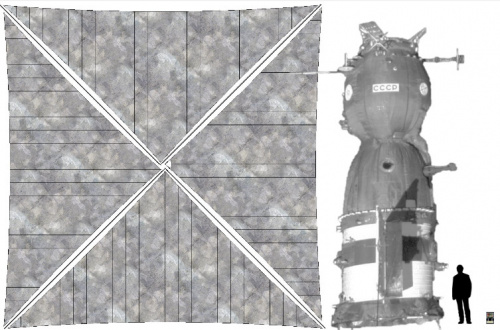 Other research presented at the conference covered a multitude of subjects, including engines and ferries that could be used to get spacecraft from here to there, and interesting science targets such as Mars's former-asteroid moon Phobos, and Saturn's largest moon Titan (which apparently has an atmosphere so thick that an aircraft could stay aloft using 2% of the energy required on Earth). Suffice it to say that even without more billion-dollar missions (for uncrewed spacecraft at least), small spacecraft, imaginative mission design, and clever engineering should bring us fascinating results for years to come.

The second event we attended was Kentucky Space's "PocketQube" Workshop, held in May in Cape Canaveral Florida (as well as a few other locations around the country).

PocketQube is a new standard for extremely small spacecraft, developed by Professor Bob Twiggs (now at Morehead State University), one of the people behind the original CubeSat. Where a CubeSat is 10cm on a side, PocketQubes are only 5cm on a side - 1/8 the volume of a CubeSat. The PocketQube standard was developed to even further reduce mission cost - an unsubsidized CubeSat mission can easily exceed $100k, but a PocketQube can be built and launched for about $35k. This still isn't cheap, but it's getting closer to what an ambitious school or other group could afford or Kickstart. 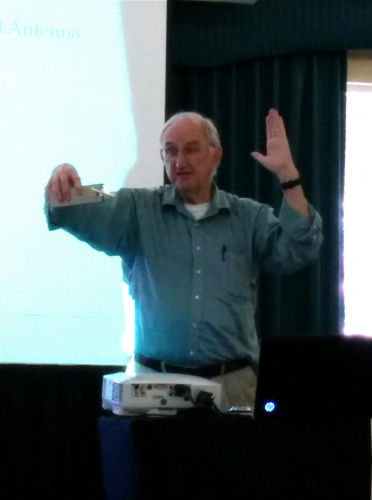 Several PocketQubes have been built and launched and are successfully operating on-orbit. One of these is provocatively called "$50SAT", which isn't far off. It was developed by three amateur radio enthusiasts with little spacecraft experience: Howie DeFelice AB2S, Michael Kirkhart KD8QBA, and Stuart Robinson GW7HPW. All of the flight hardware used in $50SAT, except for the solar cells, is off-the-shelf (some of it from SparkFun). The flight computer is a PICAXE 40X2, the flight radio is an RFM22, and the battery is an off-the-shelf cylindrical LiPo cell. The extremely clever flight software, entirely written in PICAXE BASIC, manages to trick the RFM22 into radio modes it was never designed for, such as FM morse, FSK RTTY, and native RFM22 packets. Radio amateurs can receive telemetry from the satellite as it passes overhead, and even talk to it if they assemble the right equipment. What's most gratifying is that the designers have released all of the software and hardware to the public at 50dollarsat.info. Go Open Source! 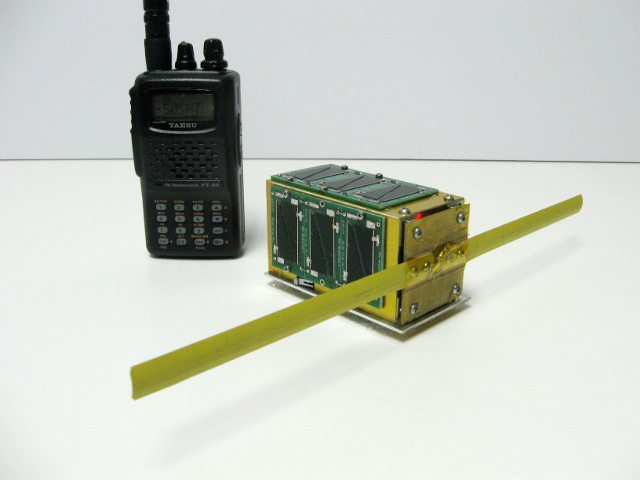 Since they are even more aperture-constrained than their larger cousins, it may seem impossible to do anything "useful" with something about the size of a tennis ball. For educational purposes this isn't a problem, as students working on the design, construction, launch and operation of a satellite IS the mission. But since PocketQube makes it more practical than ever to send up constellations of tiny satellites, with a bit of imagination the platform may enable some really neat distributed science. The small size also naturally limits complexity, which leads to better reliability. Or as Professor Twiggs puts it, "It is better to have a working Sputnik than a failed Hubble." 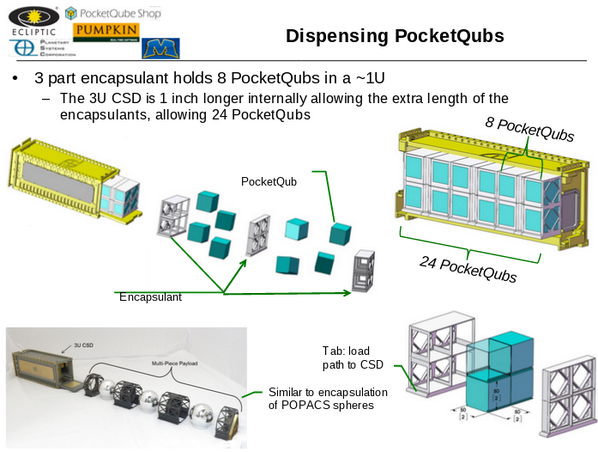 Both of these conferences put together had less than a hundred people, which was part of the fun. Later this summer, SparkFun will again have a booth at the much larger AIAA Small Satellite conference. If you're there, please stop by and say hi to myself, "According to" Pete Dokter, and Jeff "Richard" Branson. We're still not planning on putting specific satellite hardware on our storefront (yet). But as $50SAT demonstrates, with some off the shelf parts and careful engineering, the sky is no longer the limit.