Wondering how to organize all of the tools and materials in your workspace? Look to the pros for inspiration!

As SparkFun's Creative Technologist, my job is to showcase our products by building cool stuff. Because our catalog is so expansive, and because I want to keep the projects fresh, I end up working with a wide field of tools and materials. Sometimes I need a set of acrylic paints, sometimes I need a ball peen hammer. At times I'll reach for a sewing kit... other times, a jug of resin. 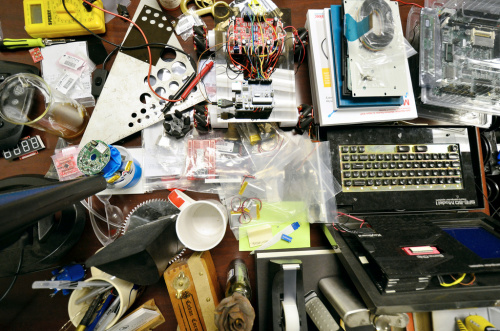 But as the big move approached, I saw an opportunity to cut the cruft and start from scratch with a new approach to organization. One that hopefully wouldn't involve potentially lethal stacks of heavy, teetering madness. I made a proposal, I requested a budget, I pounded my fists and screamed at the heavens... oh, and I did some research.

How do you organize a shop where you might be building flying drones on Monday and painting with thermochromatic pigment on Tuesday? If your T-handle hex wrenches are in the first drawer on your toolbox, where do your leather punches go? What about your french curve? Your multimeter? 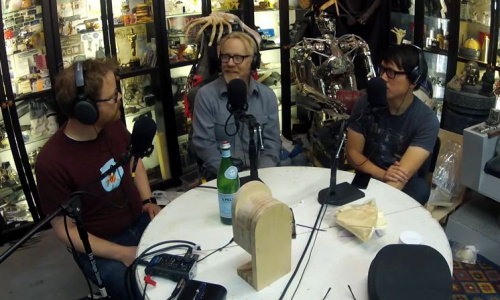 About the time that I began seriously mulling this over, I was listening to Tested's "Still Untitled" podcast featuring Adam Savage. I don't like to invite the comparison, because it isn't flattering to me, but Adam (of Mythbusters fame and ILM lore) also faces the challenge of working in a wide array of materials. Episodes of "Still Untitled" about things like shop safety, organization and tools went a long way in helping me figure out how to spend my budget wisely and get the most out of my space. Certain things like his amazing Sortimo storage system were a little too spendy for me, but I improvised and found low(er)-budget solutions.

Adam's attitude toward the ideal workspace seems to revolve around a few core concepts:

The Studio of Tom Sachs 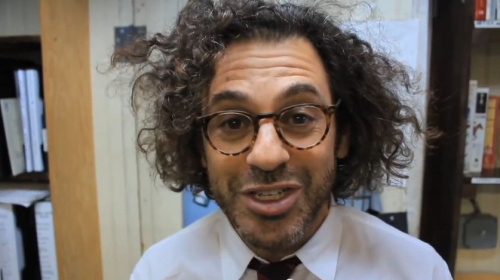 "Your only job is to not drop this pipe on my head, that's your only job"

Studying Adam's approach to workplace organization eventually led me to this awesome conversation between himself and Tom Sachs. Sachs is a sculptor and multimedia artist working in New York City. He's best known for his "Space Program" exhibit as well as various deadly objects sculpted from luxury-brand packaging.

A portion of the "Talking Room" conversation that I linked above concerns a series of short movies which serve as the shop handbook for Tom Sachs studio employees and visitors. Take an hour or so and consume the video at TenBullets.com it will make you a better different person.

It's important to keep in mind that Working to Code was very specifically produced for employees of the Tom Sachs studio and that, while edicts like "Purple is forbidden, there is no excuse for purple" and "creativity is the enemy" may sound childish or totalitarian, they are an attempt to train a varied cast of artists and technicians to consistently execute one man's vision.

There are plenty of universal truths and commonsense techniques in Working to Code as well. Things like keeping a tally of your consumable materials and making notes to re-order them, or recognizing and using the correct size Phillips driver for the fastener at hand. Every time I use a table saw, I remember the words "The table saw is a witch, a witch who will take your finger."

Some of Tom Sachs' stand-out edicts from the Ten Bullets website include: 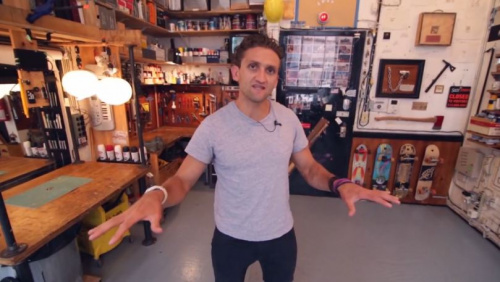 If you check the end credits for any of the wonderful Ten Bullets videos, you'll find that they're all directed by Van Neistat ("NICE-tat"). Van and his brother Casey Neistat worked with the Tom Sachs Studio in mid-2001 to make a series of short movies before eventually starring in an HBO series appropriately named The Neistat Brothers.

Casey Neistat's NYC studio was the subject of a Gizmodo video tour during the summer of 2013. Casey's unpolished, but thoroughly finished, aesthetic heavily informs his studio layout and processes. Hand-made, purpose-built jigs and organizers are key to keeping his studio clean and productive.

Here are a few bits and bobs that I pulled from the aforementioned video tour as well as Neistat's own video work:

So how did all of that help me put together a functional workspace? Let's review what we've learned and decide how to apply it (in a buying stuff kind of way)

Lots and lots of clean, empty workbench: This is simple enough, we just need to ensure that we have a workbench for the shop. Oh, and enough storage for all of our things so that almost nothing has to live on the bench full-time. In fact, what we really need is two benches. One that has permanent residents like soldering stations and computers and another just for scratch space.

First-Order Retrievability: When shopping for a toolbox, it's very easy to simply buy a box into which you can put tools. In sticking with the mandate for first-order retrievability, we'll be sure to purchase toolchests which have shallow drawers so that tools can't become buried. In the case of parts, those will need to be organized in something akin to tackleboxes. And those boxes can't just be stacked, they need to be independently retrievable, too.

The right tool for the job: Now is my chance to donate some of the tools I've collected to our Dept of Education (Who else needs 15 pairs of SparkFun pliers?? Apparently I did at some point.) And also to take some of my personal tools home. The time has finally come to assess which tools I really need day-to-day and invest in a set for the workshop.

Keep a List: Having plenty of jot pads and whiteboard space is probably going to be important. A notebook for writing down consumables that need to be restocked is a professional touch and will keep me from running out of 3/8" 4-40 bolts in the middle of a project! That notebook needs a home where I can always find it, as well.

Access to tools and materials: Neistat's system of leaving power tools plugged in and ready to rock is actually a great idea in a space like mine. But it would be great to selectively power groups of tools. I think a system of rolling carts with separate power strips will do the trick. The concept of deep storage is worth exploring as well, maybe I'll carve out some space for the things I rarely use but can't part with.

Okay, So What Now?

I know you want me to ramble some more, but let's save something for Part II. Join me next time when we'll talk about how and where to shop for things like workbenches and plastic boxes. We'll also have a look at the completed workspace and I'll be happy to answer any questions!

In the meantime, go check out the links from the article above and hit the comments section below to tell me who your influences are! What's your favorite system of organization? Let's talk shop!