Introducing the SparkFun Ecosystem for the Particle Photon

There was a big piece of news announced yesterday at MakerCon. Zach Supalla, CEO of the company formerly known as Spark, announced they’re changing their name to Particle (which makes sense, given the theme of their latest products -- the Electron and Photon).

As Zach put it in a blog post yesterday, “Spark” is a great name for an electronics company, but “unfortunately, lots of other people feel the same way” (we certainly do). We’re no stranger to the ugliness that can arise from companies trying to protect (overreach on?) a trademark, so we’re excited for Particle to escape any similar situations while building on a unique name. 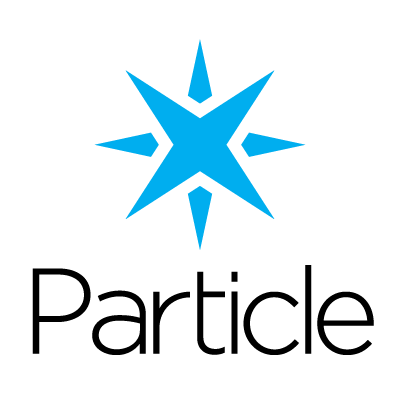 A lot of us here at SparkFun are huge fans of Particle’s product line: the tried and tested Core, the all-new, better/cheaper Photon, and their latest Kickstarter hit the cellular-focused Electron. Many of us have embedded Cores into projects of our own. Nathan and Cody built a Core-based beehive monitoring system for the new SparkFun hive. Joel’s using a Core to monitor his aquaponics setup. The Cores are the perfect tool for reliable, over-the-air, Arduino-like development of connected projects.

As much as we love our Cores, we’re really chomping at the bit to get our new Photons, which seem like they’ll be able to do more than a Core can, at nearly half the cost. The Photon shares the same form factor as the Core -- pinout and all -- but builds around a WiFi/ARM Cortex M3 SoC they call the P0. 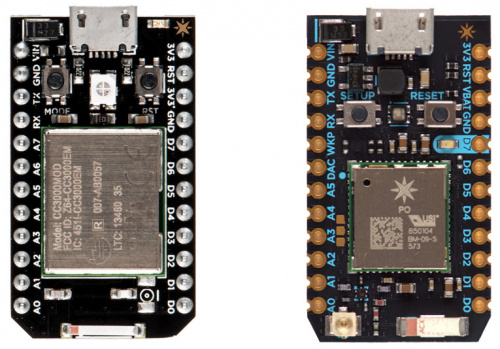 In an effort to make the Photon even easier to play with, we’ve been working on a series of shields that’ll provide the development board with unique features. In all, we’ve got six new Photon shields up for pre-order today, which we hope to get shipping out by the end of June. 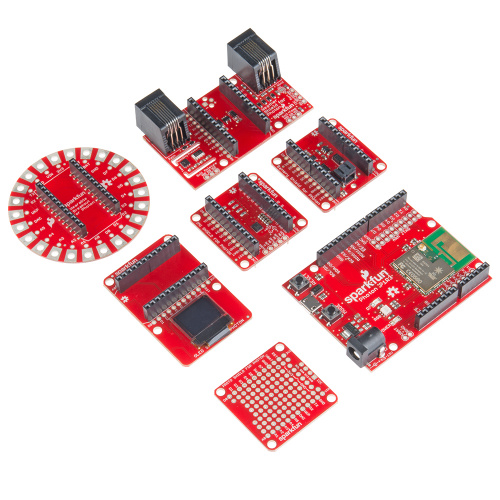 The Photon Weather Shield wires up the Photon to humidity, temperature, and barometric pressure sensors, and can also be connected up to our Weather Meter to measure rainfall and wind. 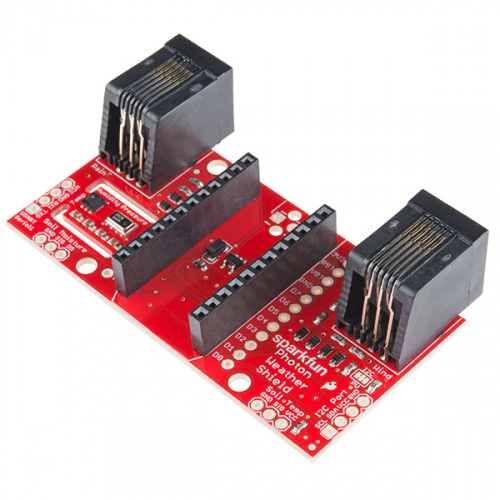 The SparkFun Photon Weather Shield is an easy to use add-on board that grants you access to barometric pressure, relative hum…

The Photon Battery Shield equips the Photon with a single-cell LiPo battery charger, as well as a LiPo fuel gauge to monitor the remaining power. 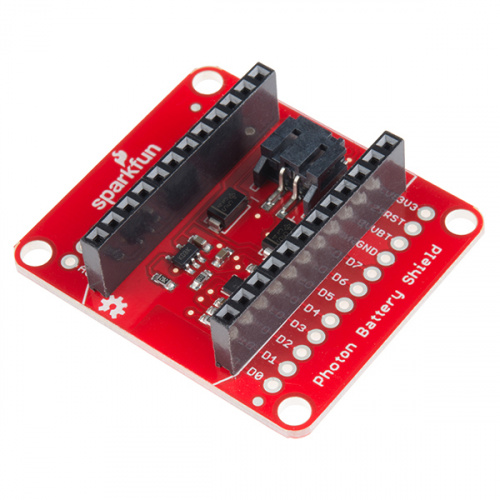 The Photon IMU Shield gives the Photon motion-sensing ability by connecting it to an all-in-one 9DOF IMU (a lot like the LSM9DS0). With this shield, the Photon will be able to sense linear acceleration, angular rotation, and magnetic fields. 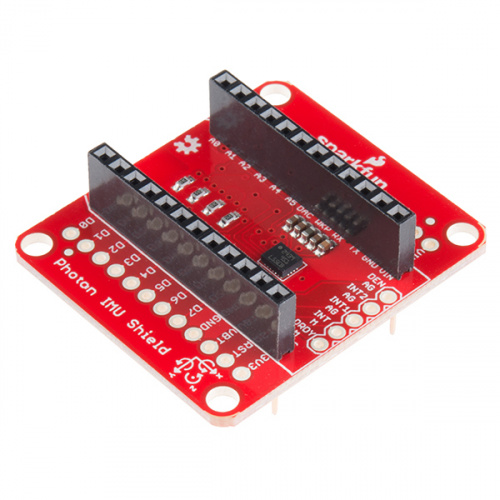 This is the SparkFun Photon IMU Shield, a versatile motion-sensing add-on board for your Photon device. Each IMU shield is eq…

The Photon OLED Shield connects the Photon up to a blue-on-black OLED. The display is small, but it’s perfect for visualizing IMU data or printing readings from any of the other shields. 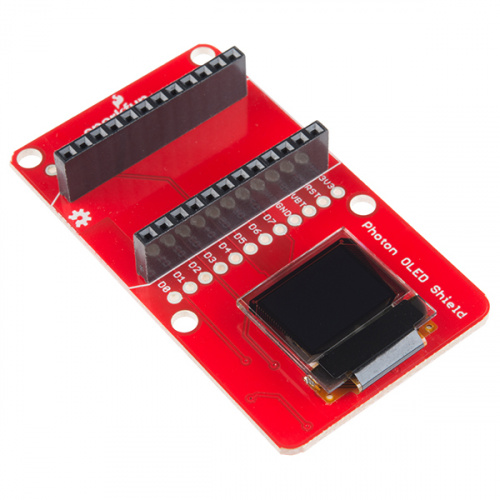 The SparkFun Photon Micro OLED Shield breaks out a small monochrome, blue-on-black OLED to use with your Photon module. It’…

The Photon Wearable Shield is perfect for e-textiles projects you want to take to the cloud. Each pin is broken out in radial fashion to holes large enough to wrap conductive thread through a few times, or solder flexible silicone wire to the smaller through-holes. 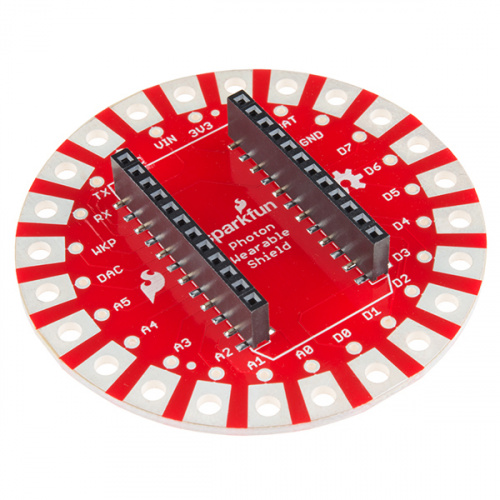 The SparkFun Photon Wearable Shield makes it easy to add the WiFi enabled Photon to any wearables project. Each pin on the Ph…

Finally, no ecosystem is whole without a Prototyping Shield. This simple little board adds some prototyping space in proximity to the Photon’s I/O pins and power buses. 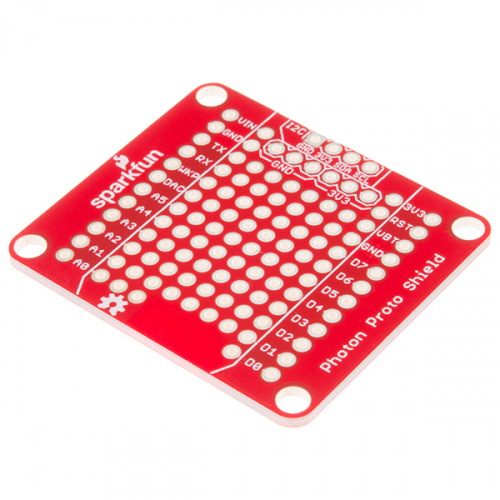 You can't have any development board without some sort of prototyping area, the SparkFun Photon ProtoShield takes care of thi…

If you can’t tell, we really, really like what Particle’s done with the Photon, and we want the rest of the world -- beginners and experts alike -- to see what we see. So to help educate anyone and everyone who want’s to know a little bit about DIY IoT, we’ll also be releasing the Sparkfun Inventor's Kit for the Photon. 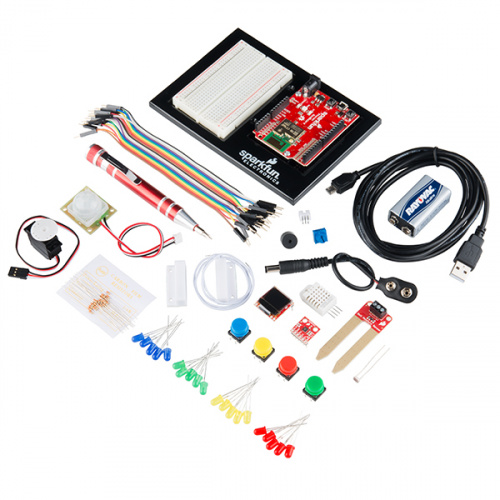 The SparkFun Inventor's Kit for Photon is a great way to get started in the fresh IoT world and WiFi development. The SparkFu…

The kit will include enough sensors and other components to build about a dozen projects, each of which maintains the Photon’s focus on IoT. Whether you’re building a browser-button-activated LED, Phant-reporting environment monitor, or an online multiplayer pong game, each experiment will take advantage of the Photon’s Internet-connectivity.

Following the theme of our Inventor’s Kit for Arduino, we’re swapping a development board of our own design into this kit. Instead of the Photon, we’re including our new SparkFun Photon RedBoard, which uses Particle’s Photon P1 module to maintain compatibility with their cloud-based development environment. The Photon RedBoard breaks out each of the Photon’s pins to the Arduino R3 headers, which allows for easier jumper-wiring, and Arduino shield compatibility! 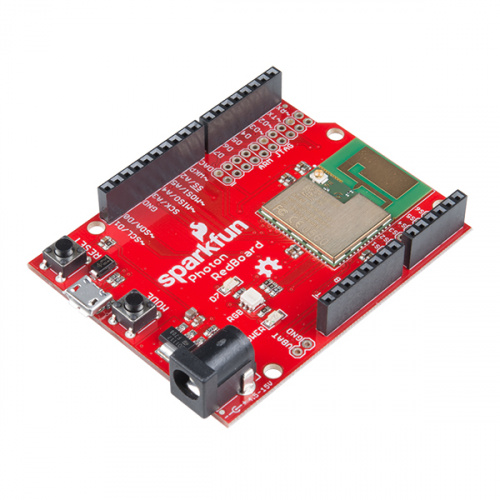 The SparkFun Photon RedBoard, to put it simply, is a WiFi/Microcontroller development board in the Arduino form-factor for th…

Phew! Product overload. Each of the products listed above are available for pre-order now. They’re on track to be shipping out before the end of June.

If you’re in the Bay Area this weekend, make sure you check out Particle’s booth. We’re honored to be a guest there, while we help demo the Photon and some of our new boards.