We take a trip to check out a different version of DIY and make some new friends on the way.

A Quick Note - We just wanted to let you know that the Shipping Department is slammed! We're still getting same-day guaranteed orders out, but First Class and Economy packages are taking a few days longer than usual. We apologize for any inconvenience and we'll be back on top of things as soon as possible.

A few months back, I was contacted by one Elliot Seguin. Elliot was doing employment screening for a company called Scaled Composites, and wanted to talk to me about how we choose engineers here at SparkFun. Now I'm sure a certain segment of you are saying “Dude! No way!!!” To you, I say “Dude Totally!!! OMG!!!” To those of you saying “So what?”, these are the guys that won the Ansari X Prize for sending a privately funded rocket (SpaceShip One) into space back in 2004, and are currently working on the next incarnation, SpaceShip Two. 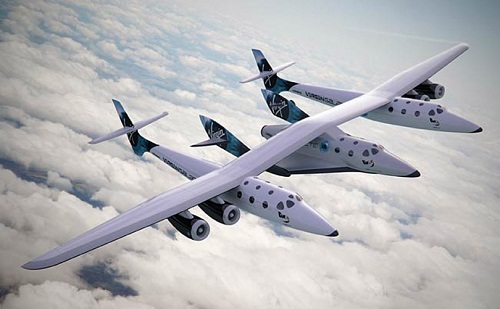 A fair contingent of SparkFun-ions know the history of this company and were as completely stoked as I was to get this contact. In brief, the company was founded by Burt Rutan in 1982, and Burt has been a major player in experimental aviation since the '70s. I've got airplane people in my family (and I've poked at the interest from time to time), so I've known who this guy was since back then. So I'm totally giddy over this, right? And I was happy to learn I wasn't the only one around here in that boat. Anyway, after a phone conversation with Elliot, we found that our companies are very similar in terms of mentality, and he asks me if we'd be interested in doing a lunch and learn at their place in Mojave, CA. And to me, that's like Pink Floyd calling up and saying they want to do a reunion tour in my back yard, and am I cool with that? Oh yeah. I'm cool with it.

But really, so what? What have these guys got to do with SparkFun and why would I talk about this on the blog? Hang on, I'll get there...

I took two other people with me to do the presentation: Chris Taylor (Project Manager/Boss Nerd) and Chris Clark (Director of IT). Mojave's out in the middle of nowhere, so we fly into Bakersfield and drive an hour to our final destination. It's mid-afternoon when we get there and Elliot isn't expecting us for a few hours yet, so we hit the only bar in town and send a text to Elliot telling him where we are. As we talk, we discuss how we saw a bunch of airliners on the field when we drove in and why couldn't we fly into here directly? We were to learn later that, among other things, the airport serves as an airliner graveyard. And that's sort of the total vibe I get from Mojave. If it wasn't for Scaled, I wonder if it would exist at all. But after a bit, Elliot showed up, had a quick drink with us and offered to give us a tour around the airport, to which we enthusiastically agreed. 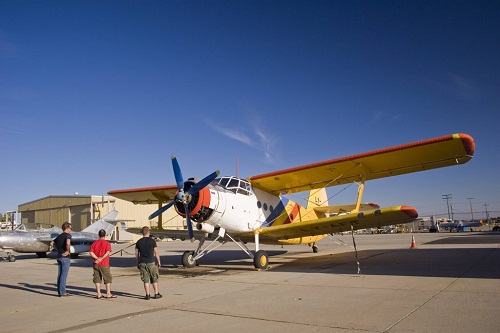 Elliot, me, and Chris Taylor looking at an Antonov AN-2, MIG-15 on the left. 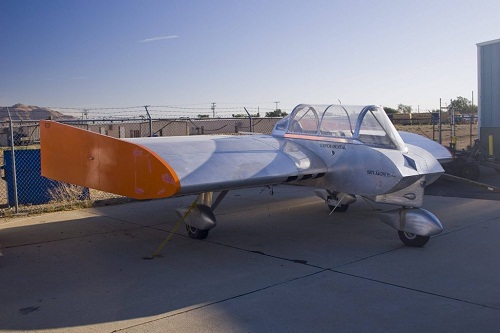 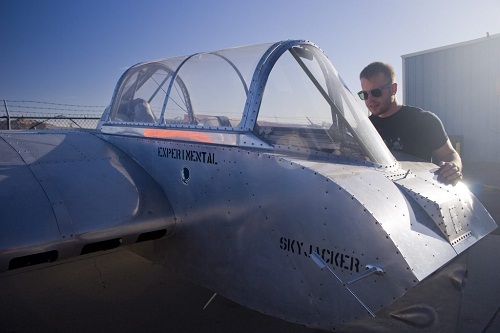 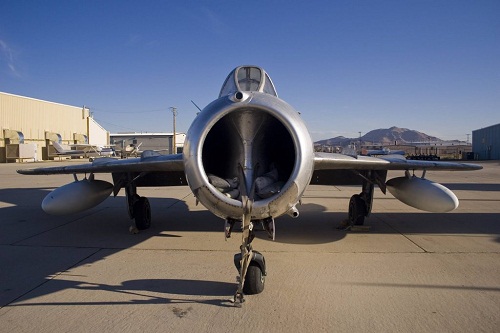 Business end of a MIG-15. Never thought I'd be standing next to one of these.

It was about this time, I think, that we learned that Elliot not only crews for Nemesis Air Racing, but is himself a Formula One class pilot at the Reno Air Races. He was kind enough to give us an up-close-and-personal tour of the Nemesis NXT...

This is actually a composite of 2 pics, but still pretty amazing. 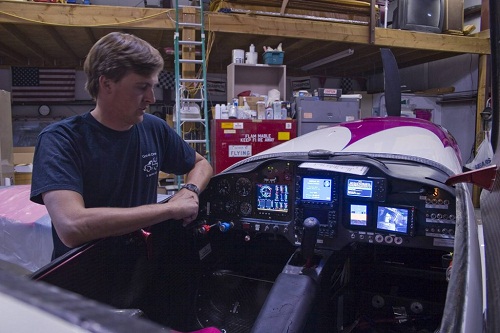 Elliot showing us the cockpit of the NXT. When you're done looking that one over, check out Elliot's page for Wasabi Air Racing.

The next day we went in and did the presentation. Nothing particularly fancy, we just covered the history, technology and culture of SparkFun for the better part of an hour. In the very front row sat Mike Melvill, one of the test pilots for SpaceShip One and a bona fide astronaut. I'm told that he's retired now and came out just for our presentation. If I wasn't nervous before he showed up, I certainly was after. Anyway, we did the presentation and it seemed to be fairly well received. After that and a quick lunch, Elliot gave us a tour of three of the Scaled hangars, which included seeing the original White Knight, the White Knight Two (aka Mothership) and, of course, SpaceShip Two. In fact, we were permitted to climb up into SpaceShip Two to have a guided tour from the project engineer for the Tier1b Avionics effort, Pete Kalogiannis. What can I tell you about that? Honestly, probably not much. The fact is that aerospace is a very different beast than DIY electronics, what with big companies like Virgin with their big money and plans being involved (we weren't allowed to take any pictures inside the hangars). What I can tell you is that these guys design and build their aircraft from the ground up: airframe design, materials, construction and avionics are all their own work. Then they prove the designs by flight testing. If that's not DIY, I don't know what is. The difference between what they do and what we do is that our lives aren't at stake when we power up. And they're not called “CrashFun”, so they must be doing something right.

After the tour, Elliot took us over to see a plane called the Boomerang and meet a guy named Tres Clements. The Boomerang is a one-of-a-kind Burt Rutan design that is unique in that it's asymmetrical... 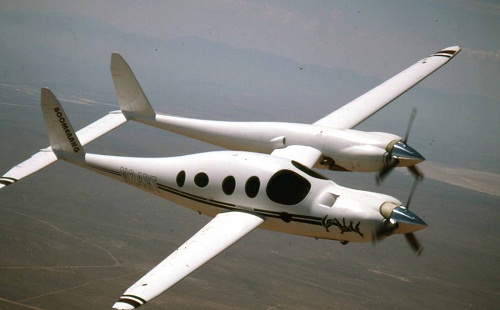 So unique, in fact, that it was on the cover of Popular Mechanics back in the day. Finished in 1996, it was Burt's personal airplane until the early 2000's when health issues stopped him from flying. After that, the plane gathered dust until last Spring, when Tres and a small group of people restored the plane with Burt's help. Anyway, long story short, Tres is now the indefinite caretaker of this historic plane. And we're standing in the hangar with it while he tells us about the restoration.

In the middle of the instrument panel sits one of our Nokia displays. Describing its function, Tres says, "the display shows some otherwise difficult to display data such as trim, wastegate and flap position, all uniquely instrumented, as well as giving a backup fuel level." That took me by surprise... but why not? I mean, avionics are expensive. And what are they but a bunch of sensors with a control system and a display? Come on! We can build this! There's a lot of people in this country that build their own airplanes. And if you're going to go that far, why not do your own avionics? Given our examples of SpaceShip Two and the Boomerang, it's not as far fetched as you might think. And indeed, it's being done. But to be fair, Tres adds that "it might also be worth mentioning I am using proven systems from Garmin, Flight Line Systems and UAV Navigation for my primary source of situational awareness and engine monitoring."

Top of the panel, just right of center. That's our guy right there. 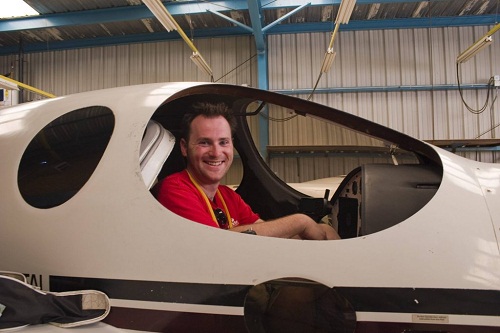 Moving on, Tres gives us the rundown on the Boomerang. Even let's us sit in it, which I was amazed at. As we say our thank-you's and come to what we think is the end of the meeting, he drops a bomb on us: "You guys wanna go up?" My mouth stops working. I'm a teenage girl in the 1960's watching the Beatles live. Do I shriek “YES!!!”, or do I play it cool and politely decline? We all sort of look at each other, all thinking the same thing. We'll never get this opportunity again, and we all know it. We politely accept.

The next morning at 6am, we meet Tres at the gate, follow him to the hangar and help him pull the Boomerang out from behind two other planes in the hangar. Chris Taylor helps with the checklist while Chris Clark and I stand awe-stricken that we're actually going up in this thing. At one point Tres hands me a 3-ring binder, within which are waivers that all passengers have to sign. All previous passenger's waivers are contained within, and the very first one is signed by Burt Rutan. Now we're in the book, too. 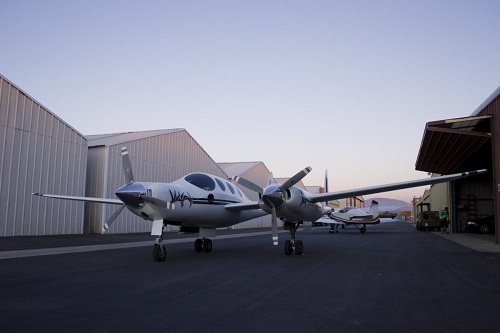 After pulling it out of the hangar. We still don't believe we're really going up.

Soon after, we all pile in. As the only one with flight experience, I get to sit up front. Where Chris Taylor left off with the check list, I pick it up, and we're doing that all the way down the runway and into the air. That seemed a bit wacky to me, but we were up before I realized it. The plane feels smooth and powerful. When we level out, Tres takes his hand off the stick, turns to me and says “OK, your plane”. Well, what could I say? I won't beleaguer the point, but we all came down with permanent smiles. 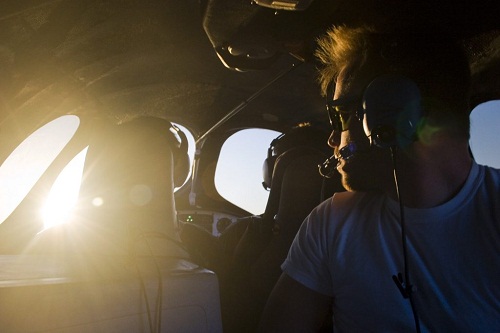 Taylor got the worst seat, but arguably the best picture. 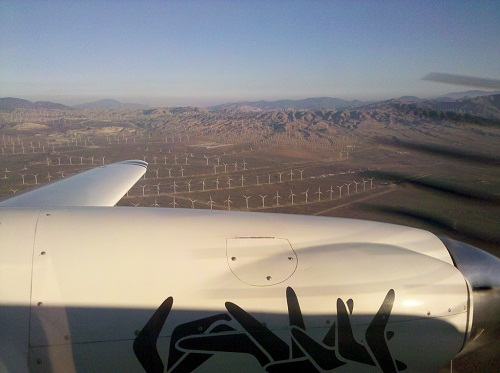 The windfarm that sits to the west of the Mojave airport.

The previous night, we went out for drinks with Elliot and David Bertucci (design engineer at Scaled) at the one bar in Mojave. We talked long about the comparison of DIY electronics to DIY aircraft, my major lines-in-the-sand being money involved and lives in the balance. But clearly, the mentality is the same. Elliot's counter argument was to describe what it took him to get into air racing (besides balls, that is): $3K for the plane without an engine, and $3k for an engine. If you've never looked at airplane expenses before now, those numbers will look big. If you have looked into it before now, those numbers are appallingly small. So for $6k and some DIY, dude was racing in a very elite league. Hard to argue with that.

But more to the point, Elliot has a deep-seeded interest in getting more people involved. And I don't blame him, because it is wicked cool and truly anyone can do it given the motivation. But what we at SparkFun do is easy and cheap. What these guys do takes real commitment. And not just in dollar signs, but in character. Obviously we share common ground, but the finances alone will cull the DIY aircraft heard. What can be done to bridge the gap? More and greater web presence, says I. Share everything that you can, even if you're screwing up. Every little bit of information becomes a call to the cause. Soon after returning home, Elliot forwards me this link. Absolutely beautiful work.

To wrap up, I'd like to thank everybody at Scaled Composites that showed us around and for showing us such great hospitality, and Tres Clements for the fantastic ride in a piece of history. But mostly thanks to Elliot Seguin for making this all possible, being an amazing host to us and for pointing out another facet of DIY that we may have overlooked. You have an open invitation to visit us any time. Extra shouts out to Tim Kelley and Jennifer Whaley for being generally cool and showing us a good time.

For some more information on all this jazz, check out the Mojave Air and Space Port , International Formula One Air Racing, and Air Racer: Chasing the Dream.