The Sparkfun Tech Support team put on a robot joust. After months of preparing not only the arena, but also the competitors, they are here to bring you their tale of robot mayhem.

If you hear those words and are in touch with your inner geek, you likely think of things like an epic battle between Optimus Prime and Megatron, or if you are more old school, Rock 'Em Sock 'Em Robots. While both of the aforementioned items are awesome, your friendly neighborhood Tech Support team decided that we wanted to create our own world-dominating army of robots battle bots for jousting as one of our goals for this quarter. After all, only getting to play with our products once the magic blue smoke escapes can get a little boring. 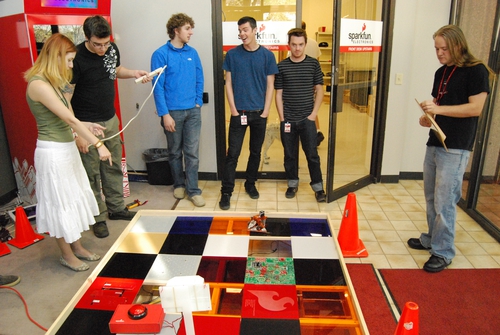 Vimeo version of the video can be found here. Each member of Tech Support dreamed, designed, built and ran their own robot in an arena that we also designed and built. Each member was responsible for creating two obstacle tiles, one of which had to be electronically based (our active tiles), and one that was purely passive (no electrical bits whatsoever). Between a moving bed of nails, a massive pitfall, a teeter totter, spinning gladiator arms and a radioactively labeled pillow pit (don’t worry-no one is glowing yet as far as we can tell),  we created a 25 square foot battle floor that was impressive to see. 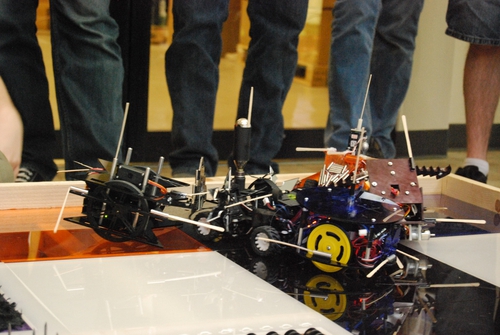 The robots were slaved over for the last several months, squeezing them in at the end of the day between emails and phone calls. Last Friday, we threw down in the main lobby of SparkFun, matching up each bot against one another in 5 rounds of 2 matches each round. The full rules for the robo-joust will be posted in a little bit once we modify them for public participation -which means there will be a competition open to the public, so start dreaming up your bots now!

In brief summary however, the rules were as follows. One bot, that must fit entirely inside a 6x6 inch box at weigh-in, was allowed per competitor and all bots must weigh 1.5 lbs or less. As we were doing this for a goal, we decided that as members of Tech Support, we wanted to limit the electronics that could be used to only SparkFun parts, in an attempt to increase our understanding and knowledge of a wider range of our products. Because we didn’t want to actually destroy each other’s bots after spending so much time getting them up and running, we decided to use toothpicks as lances on our bots and make the competition joust-based as compared to destruction-based (despite multiple requests for fire pits). 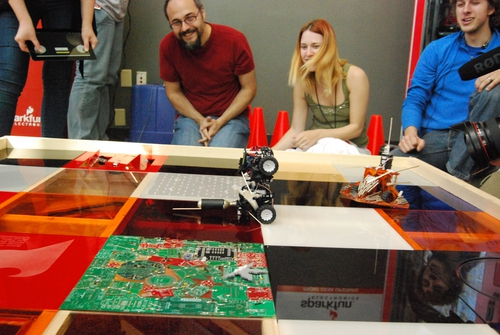 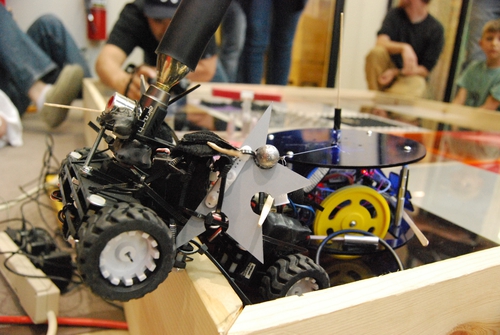 Each competitor started out with 0 points. For each time that one of the 5 lances placed on the bot were cracked, 1 point was added to their score. For each toothpick completely broken or knocked off of their bot, 2 points were added to their score. For each time a bot was immobilized (flipped upside down or stuck in an obstacle pit were the two most common issues) and required judge intervention to get moving again, 2 points were also added to the score. The overall winner walked away with the lowest score.

For our competition, John managed to walk away the champion, with a score of only 4 points. Pamela came in second with 6 points, Tim came in third at 12, Michelle followed closely with 16, and I came in dead last with 29 points (my own obstacles caught my bot many, many more times than I would like to admit). 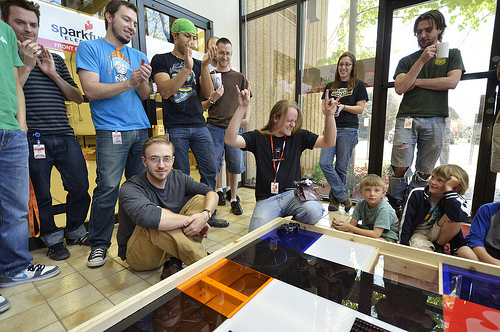 If you are interested in reading about the design process for each bot, check out the following tutorials:

As mentioned, we will eventually be hosting a public RoboJoust. However, there are a lot of logistics to work out before we get to that point, so don’t expect to call or email and get an inside scoop on any of this-we don’t have the details worked out yet. We will post more information about the upcoming public battle once we have solidified dates and information, so please be patient and don’t contact us for those specifics. You will know once we know. Thanks!