As a child growing up, I played with Barbies. Needless to say, I have a soft spot in my heart for them. Yesterday, Barbie caught my eye in the news (Warning: potentially NSFW language in that article).

She was becoming a Computer Engineer and learning how to code! Except… that wasn’t really what was going on. Barbie designs a game (which is a great thing on its own) but proved to be unable to do it without the help of her male friends. Not only that, her laptop (and her sister’s) became infected with a virus, so she asks her computer science teacher how to fix it. Even though she has the knowledge to fix her computer, the boys step in because “it will be faster” to just let them do it. 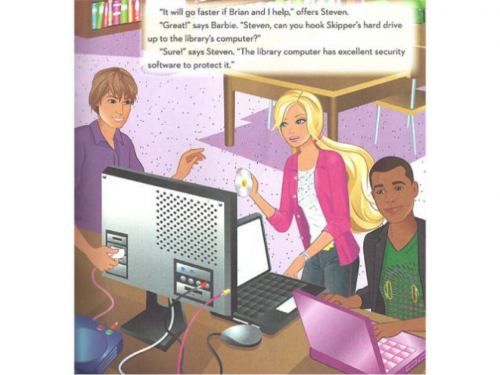 Though I was never actively discouraged from going into any sort of engineering field, I was never actively encouraged either. After being hired by SparkFun, I’ve been inspired to start learning how to code. So far, it’s been a pretty frustrating journey, but I’m rather determined to figure electronics out. This Barbie debacle frustrates me more than any code I've encountered. As a woman just beginning to learn how to code, this book makes me angry. Barbie implies that women can’t code; they depend on men to do the hard work, and then take the credit for the work. Why couldn’t Barbie have figured out how to code the game herself? Why didn’t she fix her computer on her own? She had the knowledge.

This book had so much potential to encourage girls to begin exploring technology, and yet… it failed pretty miserably. Thanks Barbie, but I’ll be reading about Grace Hopper for real coding inspiration, and getting back to working on my projects.

AMA with Nate & Pete is IMMINENT