Create your very own levitating light with just a handful of parts.

Some projects don't need to have a noble cause to better the world or make some aspect of daily life easier. Some projects are done just because you can, or it looks cool. Back in 2012, I worked on a group project for school with a simple task: Use a sensor and do something interesting. We decided to build a simple magnetic levitator to float a few magnets in midair, but there were parts of the project that I wasn't able to implement. The main feature I wanted to add was wireless power transfer. 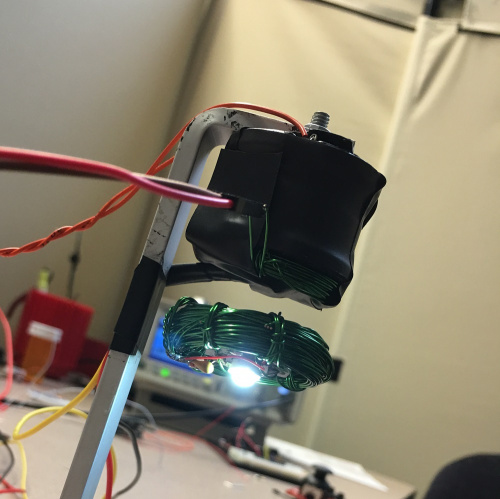 Wireless power works just like a normal transformer, except there isn't the iron core that's found in a traditional transformer. The physics, however, still work the same: current from the primary windings creates a magnetic field, which induces current on the secondary windings. The lack of ferrous material connecting the windings, though, means that the power transfer efficiency is significantly less. But let's see this thing in action!

Unfortunately, it's still not perfect. There's still too much oscillation at times, but I think that's because the comparator circuit output is only off or on (even though they're short pulses). Another reason could be from using a single sensor, which is picking up both the magnetic fields of the magnet and the inductor, resulting in a slight error. I'd also like to transfer more than just a watt of power to the LED, but without tighter and cleaner windings, I'm not sure how much more power I could transfer without adding too much weight.

If you'd like to build your own, check out the GitHub repository here. Have you ever worked on a project like this before? What kinds of projects have you worked on, just because you could? Let us know in the comments below.

According to Pete: SMD Soldering Tips and Tricks