Give chatty friends the hint with the Oscar Shh-tatue!

Then, there are people like me. I watch the Oscars to witness those unpredictably awkward live-TV moments. One of my favorites is when an award winner who has just been given the professional honor of a lifetime starts giving a prolific and emotional speech, only for the producers to start the music and "play them off." A swelling of music indicates that it's time to "wrap it up," cutting off the winner and forcing them to talk hurriedly and become flustered.

Playing someone off is a massively passive-aggressive move --- and, as a person who is terrified of confrontation, I love it. It works beautifully in the awards context, so naturally I began to wonder how it could work IRL. Inspired by the spirit of the Oscars and Dave Chappelle's 'Wrap it up' box, I made myself the "Oscar Shh-tatue" to bring the phenomena of playing someone off into everyday life.

The Oscar Shh-tatue is an Academy Award look-alike that is designed to sit on your desk. It looks innocuous from afar...but the up-close engraving message is a bit more aggressive. 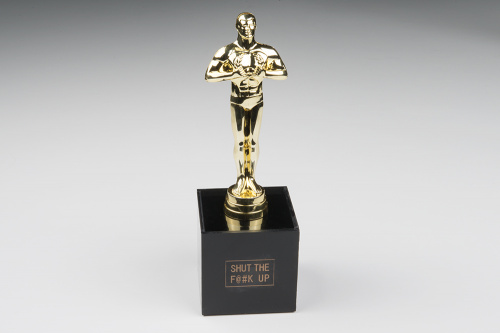 Hidden on the bottom of the base is a small momentary push button. 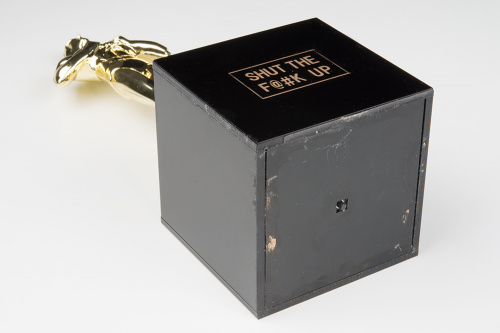 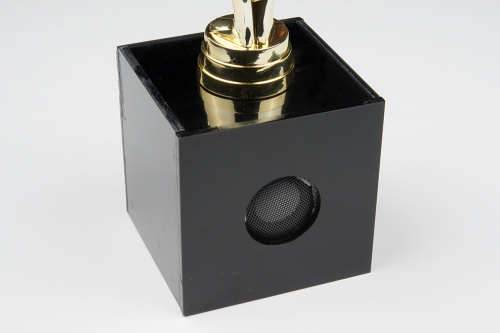 The button on the bottom remains pressed while standing on a hard surface. Lift the trophy up, and the button releases, triggering the track to start playing after a short delay. Hand this to a friend who is talking too much, and after a few seconds the music will begin to play them off, indicating that your friend should stop talking. This saves you the discomfort of having to say to your friend's face, "Hey, man, I'm busy; do you mind leaving me alone for a while?"

Making the Oscar Shh-tatue involves some electronic components as well as objects for fabrication.

Fabrication is where you get to be creative. I ordered an imitation Oscar trophy online and removed the trophy from the base. Then, I used the laser cutter and black acrylic to fabricate the new base and put the trophy on top of that. I made my base 4''x4''x4'' to ensure that I had plenty of room inside for my electronics.

To build the circuit, you will need:

The SparkFun RedBoard combines the simplicity of the UNO's Optiboot bootloader, the stability of the FTDI, and the shield com…

These headers are made to work with the Arduino Uno R3, Leonardo and new Arduino boards going forward. They are the perfect h…

This is a simple 4 cell AA battery holder. The 5 inch cable is terminated with a standard 5.5x2.1mm, center positive barrel j…

This is a standard 12mm square momentary button. What we really like is the large button head and good tactile feel (it 'clic…

This is a class 10 16GB microSD memory card, perfect for housing operating systems for single board computers and a multitude…

Before you build out the Oscar Shh-tatue, drop your MP3 files on the microSD card. You can use any track you like; just make sure it's labeled 'track001.mp3.'

Putting the hardware together could not be simpler with the SparkFun MP3 Player Shield. First, solder a set of stackable headers on the shield. Then pop it on top of your RedBoard. Solder a wire to each lead of the momentary push button. Strip a small segment of the opposite ends and place one into a ground pin and one in digital pin 10 on your shield. Then, plug the speaker into the shield and the battery into the RedBoard.

Copy and paste the following code into your Arduino IDE and upload it to your SparkFun RedBoard. //Oscar Shh-tatue by Melissa Felderman for SparkFun Electronics

Now put it all together inside your fabricated base, and put that shh-tatue to good use!

Share your thoughts and feedback with us in the comments below.