Let's build a small smoke machine to harass our friends and colleagues!

When I wrote about the science of vaping earlier this year, several people noted that the vape tank I was playing with might make a reasonable smoke machine for things like costuming special effects. As April Fool's Day draws near, I'm beginning to think it would be just the right tool for a prank!

It may have been hard to see on video, but this little device put out a decent amount of "smoke." In addition, the Blynk Board turned out to be the perfect remote trigger. Aside from the vape tank and a length of tubing, everything I used in this project can be found at SparkFun. I used Actobotics parts to attach everything but you could build it into any enclosure you like. There are really only three core parts, aside from the vape tank:

This vacuum pump really sucks! This pump operates at 12V and has enough suction for most small projects. We even used one to …

This is the SparkFun MOSFET Power Control Kit, a breakout PTH soldering kit for for the [RFP30N06LE](http://www.sparkfun.com/…

You can pick up the tank online or at most tobacco shops. You'll want to choose one with a high resistance coil because it will be easier to heat up. The coil that I used was 1.8Ω and it was perfectly happy being driven at 5V, pulling only a few amps of current. Instead of using a pre-mixed vape "juice," I filled the tank with 99% anhydrous glycerin from the pharmacy section at my local grocery store. Glycerin is used as the base in most vape juices as well as in many smoke machines because it produces a thick white fog when vaporized. Using plain glycerin allows you to get that smoke effect without added flavoring, scent or nicotine. The coil in my tank was perfectly happy with glycerin straight out of the bottle, but you may need to thin it with a little water.

The construction of the smoke machine is simple enough; we just need to power the coil in order to produce vapor and then use the pump to draw the vapor out of the tank. I used a short piece of vinyl tubing to connect the mouthpiece of the tank to the inlet on the vacuum pump. I also put a tube on the outlet of the pump, which you could use to direct the smoke out of an enclosure. Because the pump and the tank combined can draw a significant amount of current, we'll need a big transistor to switch them. I like to use the MOSFET Power Control Kit in applications like this because the MOSFET is rated for fairly high power and the screw terminals make it easy to connect.

To control the smoke machine remotely, I chose to use the SparkFun Blynk Board. While it may be a little bit of overkill to put my tiny smoke machine on the web, the Blynk app is a quick and easy way to get remote control on your embedded project. Once the Blynk board was provisioned and connected to my app, I just added a button widget that controls the state of pin 5. With pin 5 connected to the control pin on my MOSFET board, I was then able to switch everything on and off from my smartphone.

Here's the complete diagram of my smoke machine: 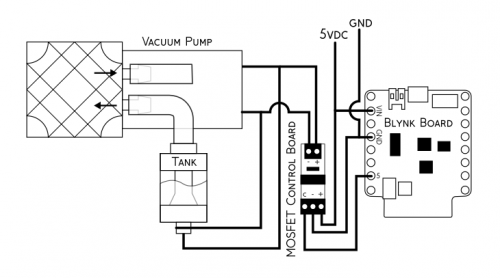 The whole thing draws about 3 amps at 5Vdc so you'll need a stout power supply to drive it. I suggest using a 5-volt SLA battery for remote applications or you could plug it in with one of our 5-volt Mean Well Switching Power Supplies. As I mentioned before, I mounted the whole thing on some Actobotics and the final product looks like this: 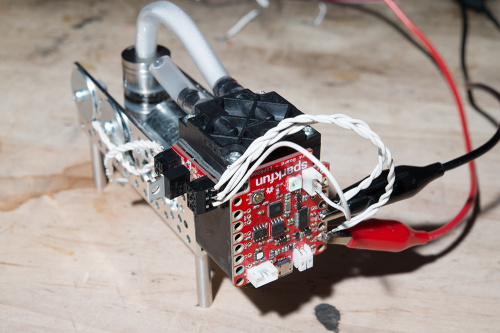 And it may be hard to see against my light colored workbench but here it is making some fog: 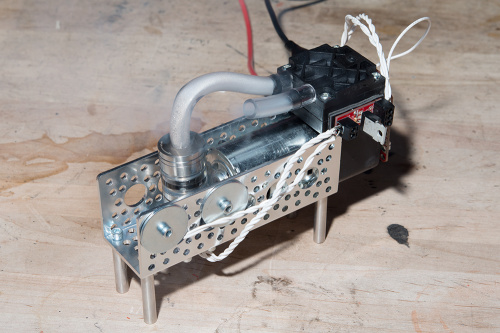 There are a number of things that I'd like to try in order to make this smaller and quieter. One improvement would be to use an impeller pump instead of a diaphragm pump. Impeller pumps are quieter and, while they have a lower static pressure, generally have a higher airflow. It may also be possible to create a duct around the air inlets on the tank and force air through it with a small blower. if you wanted to get really small with it, there's no reason you couldn't simply attach a small air pump to a disposable e-cigarette. The only downside is that it won't be refillable and it's also possible that the battery in the e-cigarette will fail if you drive the coil for too long continuously. Also, disposable e-cigarettes won't come in a non-flavored variety. There's probably room for improvement in the formulation of the smoke juice as well. Mixing glycerin, water and propylene glycol in different ratios could yield a much thicker smoke with some experimentation.

What do you think? Any ideas for a great prank? More suggestions for repurposing vape technology? Let's talk in the comments! Thanks for reading and I hope you have a great April Fool's Day this weekend.