Can we somehow transform and take advantage of all that energy wasted inside gyms across the country?

Have you ever had an idea that seemed absolutely brilliant at first, only to have it fall apart bit by bit as you start analyzing all that it entails? First, you share it with a couple of people around you and their initial reaction is great - until you talk to that one person who has a bit of insight and can throw a stick or two into your wheel. Anyway, let us start with some background to all of this, and maybe it will start to make sense.

I grew up in a cold and dark place known to most people as Sweden. As a child, I rode my bike everywhere - the bus stop to go to school, soccer practice, the golf course, work, random frozen lakes to play hockey, you name it. As Sweden gets dark very early in the day during the colder parts of the year, it is rather important that you have a bike light to avoid collisions with badgers, moose, hedgehogs, and the occasional penguin. Back then, battery lights were for the rich kids, so I had a dynamo-powered one. To those of you who have never come into contact with bike dynamo generators, it's a little apparatus that transfers some of the kinetic energy of your rotating tire(s) into AC electricity by using magnets and other fun stuff. So essentially, moving bike + a little bit of extra resistance = electricity, that in this case is used for lighting so you won't run over a beaver or small child in the dark. 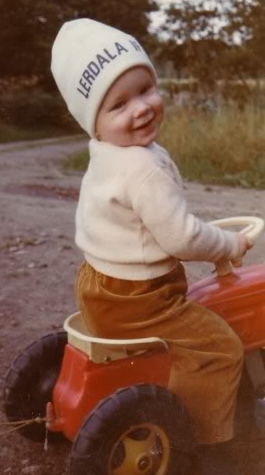 A young Erik riding on 'The Exterminator' (not equipped with a dynamo generator).

Living in Boulder County, it is difficult to not notice the general obsession of fitness here. People bike, rock climb, participate in recreational sports, and spend countless hours in gyms. This is where all the useless information above comes into the picture. If you are a gym rat interested in getting cardiovascular exercise, you are probably going to spend significant time on an exercise bike, an elliptical rider, or a similar piece of machinery. By increasing time spent as well as general resistance, you increase the level of exercise you are getting. However, it is likely that all your spent energy is 100% wasted - apart from the improvement of your fitness level, that is. Let us now imagine that your exercise equipment's resistance was provided by some kind of generator instead of magnets or a tightened belt. That instead of using electricity, you were generating it.

So that is my idea in a nut shell. You have a gym where you pay a normal membership fee, but you also have an account that keeps track of your accumulated electricity. This account can be used to provide a rebate on your personal electricity bill, or maybe you want to donate the electricity you have generated to help cover a charity's electric costs. Either way, you can probably see how this could be an additional factor of motivation of even making it to the gym in the first place. If you have solar panels on your house that generate excess electricity, power companies will now buy this from you (at a heavily discounted rate, of course), so why would they not want to buy electricity created by your sweat? In a place like Boulder where the Prius reigns supreme among cars, you can imagine the potential to get the people to go to YOUR gym if you have a good reason to stick the magic word 'Eco' in there somewhere.

Alright, so now that the idea is presented I am certain that a lot of you have either stopped reading, or are itching to start commenting on all the inherent flaws of it. So before those of you remaining jump at it, I will present the ones already helpfully supplied by friends and co-workers, or that popped into my own feeble mind.

So why did I even write about this if the idea is inherently flawed and limited in the first place? Well, I read everything that comes through our homepage posts; crazy projects where people have proven the skeptics wrong and solved problems thought not practical to bother with. Is this really all that different? It seems that despite a fairly long list of tough-to-solve problems, including ones this article may have completely overlooked, the idea still has some potential for success. Can I challenge any of you to make an attempt at this? After all, I am a computer scientist, and although curious about DIY Electronics, I do not possess the electrical engineering skills required to take this anywhere. Maybe this idea is nothing new, has anybody been to a place where it is already implemented?