We flesh out the AVC prize structure, plus the trials of Pete's first attempt at competing in the AVC.

Good day to you all, I hope it finds you suitably conscious and caffeinated. Or if you can at least achieve one of two, we'll call it a good start to the day. Let's start it off with an AVC update, shall we?

To begin with, we're going to clarify the prize structure a bit. There are two different classes, ground and air, and they each get their own 1-2-3 places. First place gets $1000 CASH MONEY! (I don't know what the significance is of saying “cash money”, but it feels good to me) Second place gets a $250 SparkFun gift card, and third place gets a $100 gift card. Plus, we have $100 gift cards for a few other categories, like Crowd Pleaser (most popular), Killswitch (most dangerous), Water Hazard (most likely to end up in the cesspool), and a few others that I'm probably forgetting. Plus – yes, there's more! – we'll be doing raffles between heats for t-shirts, hoodies, and other SFE swag. So, you know, that's pretty cool.

At the time of writing, we've got 42 spots filled. Kee-ripes, this is shaping up to be a monster. I've sent out information requests to all but the last one or two to enter, and most have coughed up some info (if you should and haven't, please do). Lots of air entries. We haven't broke 15 yet, but we're getting up there.

With regard to the air entries, I've got a first look at the makeshift altimeter we're going to try and implement, kludged together by our fearless leader, Nate. It is essentially an Open Log mated with a BMP085 Breakout and a 110mAh lipo battery. 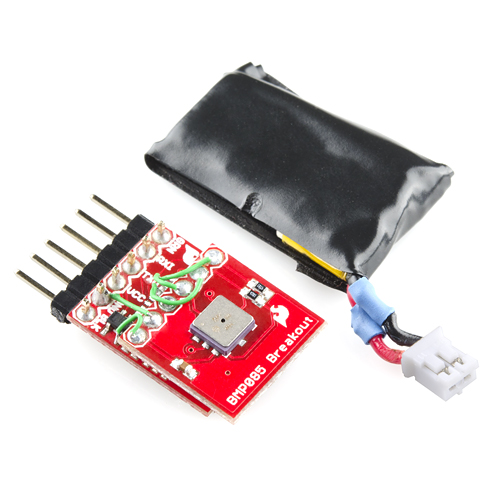 Now remember, carrying one of these is optional; you don't have to carry one if you don't want to. But the one that comes back with the lowest peak altitude gets a 15 second reduction in total time. Is it worth it? If it were me, I'm not sure I'd bother. But for the really competitive (and we are competing, after all) it may mean the difference between winning and... whatever that other thing is that's not winning. One day I'm hoping to have the first autonomous aerial knife fight. Just imagine: copter-like devices battling to the death 6 inches off the ground. But I digress.

On a personal note, I'm going to be competing this year in the ground class. For the first two years I've sorta run the start/finish line, but I've suckered Robert Cowan into doing that so I could actually run. Now I'm deep into getting a car going, but it's not going yet. I've talked to a few of the guys around here that have run previously, and I tell them where I'm at and what my operational philosophy is. And they look at me and smile, shaking there heads slightly with that “been there, done that” look. It's not that they think I'm on the wrong track, I just haven't learned the painful lessons yet. Some of the input has been quite valuable and I have no doubt it's going to save me time, but the stories are replete with urgings to get on the road quickly so I can figure out the right way to do it. The right way? Oh, come on. I mean, I don't disregard what they're all telling me; I know they're right and that getting the system to work is going to be uphill. But there's this arrogant SOB in me saying, “Wait, you guys couldn't make this work the first time? What's wrong with you?”

And that, my friends, is how you draw a line in the sand. Make no mistake, I fully expect to lose famously. But I won't be doing it quietly.

Anyway, the vehicle is an Exceed RC Sunfire offroad buggy. It actually started out as a Redcat Racing RS10XT, but I'm having way too much fun climbing over stuff to take it apart (yet). The control is provided by a Logomatic, along with a Polulu servo controller, an HMC6352 Breakout, an EM-408 GPS module, an ADXL345 Breakout, and a Maxbotix EZ4 ultrasonic range finder. For you AVC veterans, I'm sure there won't be any surprises there. The current state of the project is that I've got servo control going and I'm trying to talk to the HMC6352. It's looking something like this: 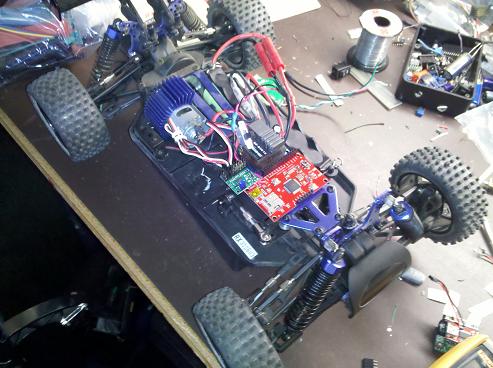 Sorry for the phone pic, you know how it is. In the basement, late at night...

I've got just over a month to make something happen here. Am I worried? Pft. No way (meaning yes, very). Are you kidding? This is cake! (Meaning that it's going to take up every free waking moment from now until 4/23). And I'll be saying that right up until it chokes on the starting line. If you still want to sign up, do so at the AVC page. If you just want to go as a spectator, you can register at our EventBrite page. See you out there.