How SparkFun has maintained a high dog:human ratio as the company has grown up.

That's what the recent email in my inbox said. I was randomly selected as the director on the dog tribunal for this January. It's the SparkFun equivalent of jury duty, and it saved our dog privileges.

Many moons ago SparkFun was a lot smaller. The first dogs began showing up at work casually around six years ago. At first it was an entirely casual affair. A few dogs came in, their owners (guardians if you prefer) cleaned up after them and kept them out of trouble, and people enjoyed the furry friends hanging about. 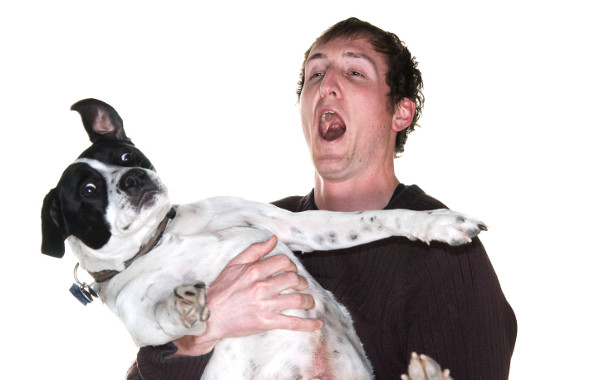 Pete from QC and his dog Choppy - one of SparkFun's original dogs (an OD, if you will) <-

But SparkFun grew. Jobs were created, people were hired, and those people wanted to bring their dogs too. It became a documented perk and it started to have rules. Like other perks, such as an employee discount or some free SparkFun swag, it was earned after six weeks on the job.

While dogs are generally kind and good-natured creatures scaling up the numbers exacerbated small problems. There were poops and pees in the building. Sometimes dogs got in fights, or a dog would go roaming where it shouldn't be. For all the happiness the dogs brought there was an undeniable toll it began to take on the employees of SparkFun. 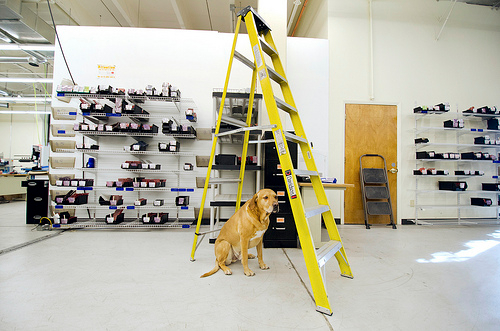 When there were around two dozen dogs coming to SparkFun managers and directors still handled issues in their department directly. Human Resources provided assistance where needed. But this didn't work. Each manager had their own brand of dog justice and what vague policies we had were applied inconsistently.

There were blind spots that grew into real problems. For example, not all dog owners were diligent about cleaning up after their pups around the outside of the building. The groundskeepers that come around to keep the place looking good complained that it was impeding their work. No one dog owner could be reprimanded, so weaker blanket reprimands happened and the problem didn't go away. 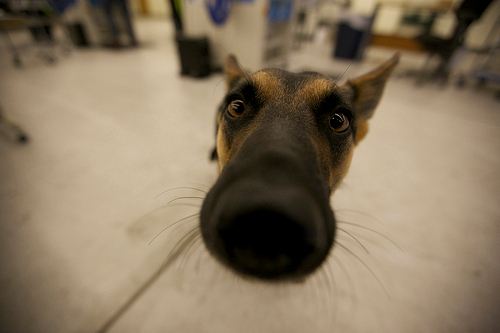 Cora, who comes to work with Tony in Production, learns how a camera lens smells <-

HR valiantly stepped up to be the central group to handle dog issues. Some serious incidents took place during this time, like bites. Most of the bites were workers from other companies onsite to do their normal rounds, like delivery drivers. Fortunately no serious injuries ever materialized, and the offending dogs were ultimately banned from coming to work.

The official dog policy became a topic of debate at monthly directors meetings. Such gatherings are valuable for hammering out big picture strategizing outside the box and whatnot, but frustration became palpable when a dog debate would slip into hour two and bump much more important stuff from the agenda. Meanwhile HR was feeling the same exhaustion dealing with petty offences of the now thirty-some dogs coming to work. 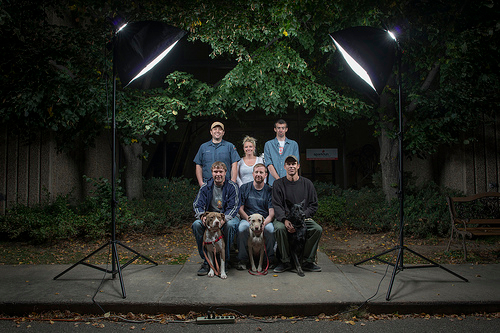 The worst of it was back in 2012. It was the height of the anti-dog cacophony. Debate percolated over whether the dog perk should be eliminated completely. Polling across the company of the day revealed a broad spectrum raging from total dog prohibitionists to fervent pro-canine anarchists. In the middle sat a large disgruntled bloc who just wanted to talk about something else for a change.

Somewhere in all that noise, though, the idea for the Dog Tribunal was born. It used the classic jury-of-peers model. The tribunal would meet monthly and its members would be randomly selected each time. The tribunal had a simple job:

The Dog Policy and Dog Tribunal History are documents on our internal wiki site. HR was free from handling minor dog incicents and the directors were free from setting dog policy. The SparkFun dog experiment had transitioned into its current form. 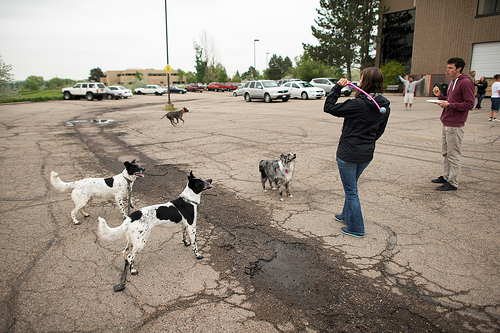 Several dogs and owners play out back at a SparkFun BBQ. The two white dogs, Sophie and Freckle, are sisters <-

The transition to the Dog Tribunal model turned down the heat of the dog debate considerably. Things got more fair and more efficient, allowing those concerned with dog issues to focus on more effective solutions to problems. SparkFun had doubled down on its commitment to having dogs at work and other changes appeared.

My personal favorite change, as a dog owner, was the company's decision to provide poop bag dispensers around the building. This minor expense for the company eliminated any excuse a dog owner had to not curb their companion but did so by attacking the root of the problem: the fact that humans are forgetful and wouldn't carry little baggies around. We still organize a mass cleanup day every six months or so but this problem, once thought impossible to crack, has largely dissipated. 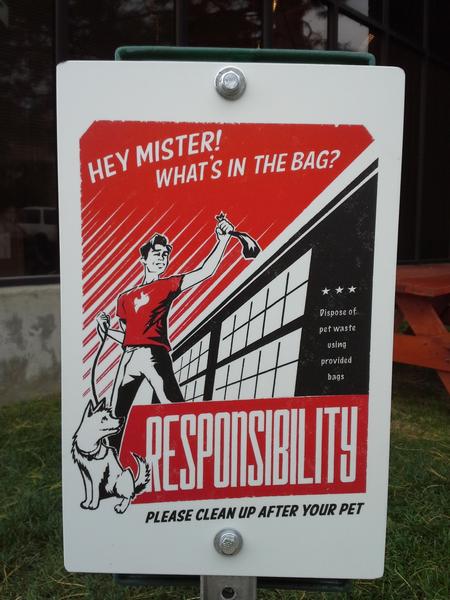 This sign, designed by our own designer Pete, accompanies a poop bag dispenser in a high-traffic area <-

Today SparkFun employs around 150 people. According to our records about 50 are active dog owners. Our human:dog ratio isn't quite 3:1, though. SparkFun has a handful of couples where both halves work under the same roof and, for whatever reason, most couples are also dog owners. There are around 45 dogs that can show up at SparkFun on any given day and probably around three dozen dogs actually show up every day.

Dogs are a firmly ingrained part of SparkFun culture. Only on special days like Inventory Day or the AVC do we not see a bunch of dogs in our building. They even popped up in the planning for our new headquarters.

As you might have heard, we're building a new building. Projected move-in date is in July of 2014 and currently they're about to tilt up the walls. 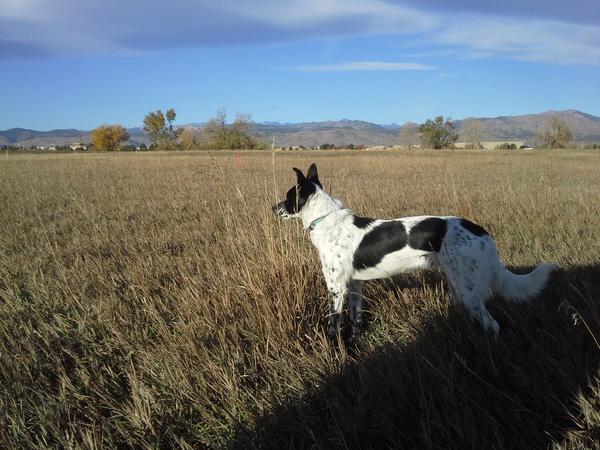 Freckle, who comes to work with my wife Amanda and me, surveys the new building site long before any groundbreaking <-

SparkFun's staff has played a huge part in contributing to the building's design at all levels. At one point Nate and Trevor were talking HVAC with an engineer who was calculating the new building's requirements. People per square foot, staff growth projections, heat-generating equipment, and building sun exposure were all gauged and documented. "Oh, and about 50 dogs" was mentioned and the engineer took it as a joke at first. It turns out that dogs can generate more heat than humans, and as about a third of our workforce, they absolutely needed to be in that critical calculation.

Also in the planning phases a specific dog yard was briefly considered and ultimately scrapped. The land on which the building will sit, though, is a larger lot that will have more undeveloped open fields adjacent, lending more room for dogs to chase sticks and balls and frisbees. 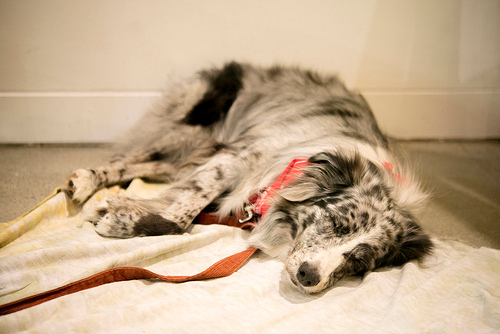 Rosie, who comes to work with Matt in Production, was the only dog to ride along on a leg of the National Tour <-

Considering dog owners that have since left SparkFun for greener pastures and the few SparkFun dogs that have sadly passed on, all time there may have been over a hundred dogs under SparkFun's roof. Our record keeping isn't that strict, and certainly wasn't all that robust until recently.

The Dog Policy includes the Dog Agreement, an affidavit that an owner will abide by the policy and accept any disciplinary action meted out by the tribunal. All dog owners must sign the policy prior to bringing in a dog, and doing so grants the owner a special SparkFun dog tag. This is intended to identify the dog and owner as being legitimate participants in the program. 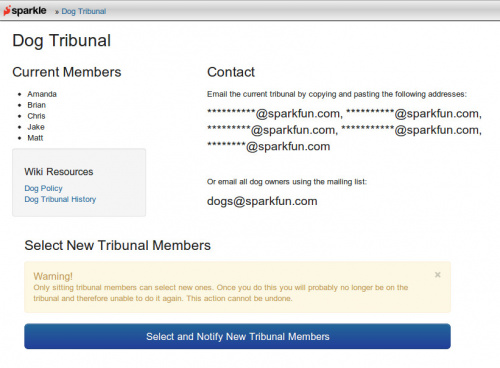 The Dog Tribunal page in Sparkle, where dog management is somewhat automated <-

Our system for tribunal management has also grown more sophisticated over time. Above is a screenshot (with last names and emails obscured) of what I see right now by visiting the Dog Tribunal page in our internal ERP system, Sparkle. A link to the Dog Tribunal page is available for all employees and at any time will show who is on the current tribunal and how to access the two big doggy documents and the dog owners mailing list.

I'm the current sitting director on the tribunal (each tribunal is one director and four non-director dog owners) and so I have the big button to make a new selection. I'll click it after I organize this month's meeting and document the events on the Dog Tribunal History page. In the system that tracks Sparkle accounts we can specify who is a dog owner, and to keep tribunal selection fair we also track how many times each person has served. All of this was born out of necessity (for example, Ray once served three times in a row and it became clear the old selection method wasn't fair). It shows how far we've come in streamlining the process of corporate dog management, and perhaps shows how far we have yet to go. 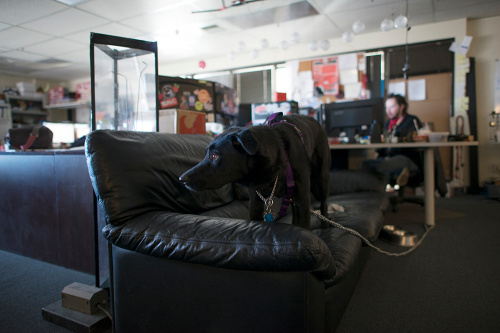 On occasion I've had guests ask if there are any cats in the building. While plenty of other fauna has appeared from time to time (including but not limited to: a bird, a scorpion, a tarantula, and a chinchilla... also Pete says he wants a hamster), to my knowledge no cats have ever been brought in. Don't get mad, internet! There are still tons of cat people at SparkFun. I actually wrote most of this post working from home next to these two. Honestly nobody has tried to bring one in yet. And with all the dogs in the building it may not be the best idea. Cats and dogs don't always get along.

Overall, since the Dog Tribunal became the law of the land and the Dog Policy has evolved the drama around dogs has diminished a great deal. It's more bureaucratic now and still far from perfect but at least we have a framework for dealing with any issues that come up, foreseen or otherwise. You can read the current Dog Policy in full here, provide your own suggestions, and even adapt it for your own use. It's open source!