Back in January, I was up at my cabin in Silverton hoping to help my dad out with a temperature monitoring system - his method was to use a video camera to continuously monitor a built in temperature gage, and he would check the images every so often to track the temperature. Obviously, this kind of system is bulky and problematic because he has to check the image at a specific time to see if the temperature has crossed an alarming threshold.

Back in the winter, I wanted to set up a temperature system using wifi so that he could get alerts if the temperature went below a specific threshold, so he didn’t have to worry about continuously checking. I used an ESP32 Thing Plus to collect basic temperature data and built an app with Blynk to display it.

What if I wanted to view the data on a display inside the cabin, or maybe a low power processor that would only wake when the temperature threshold has been hit? It seemed to me that this project was actually better suited for MicroMod because it requires versatility. So, this project turned into my progression in building a temperature system with MicroMod, and seeing all the different ways I can expand on the project with endless flexibility!

The data logger carrier board is an obvious choice for this project becasue it's low power and easy to connect peripheral sensor boards through Qwiic. And the SAMD51 is also an easy to use and economical processor to run the project. As is with all MicroMod projects, all that's needed is to screw in the M.2 connector on the processor to the carrier, and that's about all that's needed for hardware assembly! On top of that, I've added a temperature sensor through Qwiic.

With a 32-bit ARM Cortex-M4F MCU, the SparkFun MicroMod SAMD51 Processor Board is one powerful microcontroller packaged on a …

We'll run some example code for the TMP102 that reads the temperature and then goes into sleep mode to save power. Opening up the serial monitor, we can see that it's reading the temp - perfect! 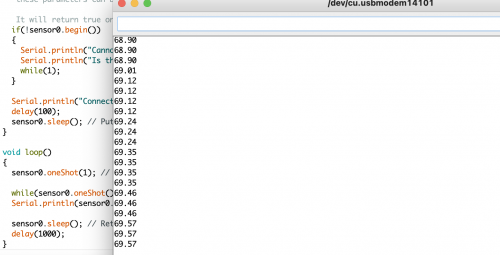 However, it isn't very useful to me to monitor the temp continuously through my computer...ultimately I want an automated system that just alerts me if the temperature is too low and I should be concerned about pipes freezing. Plus, I'd really like to test the temperature in more than one location - I'd like to set up edge sensors in the living room, the garage, and the boiler room. It seems that this is lending itself to the Artemis processor, as it's ultra low-power and can connect to Artemis edge sensors via BLE 5.0. Let's swap out the SAMD51 temeprature data to the main datalogger using Artemis BLE.

I implemented BLE over two Artemis boards using AMD Transaction Protocol which is built on top of the ArduinoBLE library. The Artemis MicroMod processor acts as a server and the Artemis Thing Plus acts as a client that can transfer data. The premise of the code is to begin serial communication with the temperature sensor, connect to bluetooth, read in temperature values, and communicate it to the MicroMod datalogger. You can check out a general code, I've just swapped the BME280 with the TMP102.

Now, I really actually want an alert if the temperature goes below a certain threshold. It seems that I've found where I was in the first place...gravitating towards an ESP32 to utilize wifi! But this time, I'd like to set up a messaging system to get a text if there's ever an alarming temperature drop, instead of relying on checking my Blynk app. I'd also like to display the data in real time at the cabin via the Input and Display carrier board. So, I might swap out the data logger carrier board for the asset tracker to utilize SMS capabilities, and I might also swap out the Artemis processor for the ESP32 so that I can still connect to my Blynk app. On top of that, we'll see if I can connect the Input and Display board to bluetooth to display real time data. Any thoughts on what direction I should take as I see how many different ways I can build a MicroMod project?

This board combines Espressif's ESP32 with our M.2 connector interface to bring a power-packed processor board into our Micro…

Add data, input, & visibility to your project with a 2.4" TFT display, 6 addressable LEDs, onboard voltage regulator, 6 pin I…