A look at controllers that use ladder logic.

Microcontrollers are everywhere today. They are cheap, relatively fast, and easy to use! Using a current IDE makes programming a breeze; couple that with a decent debugger and programming gets even easier. Most of us, including me, take for granted that we can scroll through hundreds of code lines in a few seconds. Need to locate a variable? Ctrl+F and you'll have all of its locations instantly. That’s a luxury that didn't always exist. I’d like to take a look at an industrial control device, the Programmable Logic Controller (PLC). 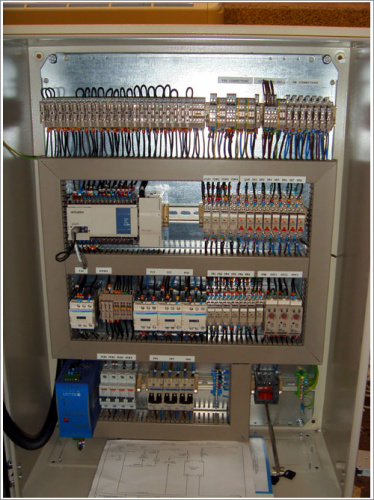 A PLC being used in a industrial application

Now hold on. Before you get your caps lock ready, yes I know PLCs are still used in everything everywhere and can be quite modern. I'm talking about really old PLCs. The ones that didn't interface to a computer and had to be programmed directly from a keypad. The Programmable Logic Controller is a term trademarked by Allen-Bradley (Rockwell Automation). PLCs are often used in industrial settings where extreme variations in temperature, vibrations, electrical noise, and mechanical shock are the norm. Before the PLC, relay logic (along with other non-computerized methods) was used to control machinery. Because a 'program' could number in the thousands of relays, changing a single 'line' of code could be extremely time consuming. In a large installment, timing was also an issue. There is a slight delay while the mechanical portion of the relay moves. Times that by hundreds of relays and you may have issues. This created the demand for a simple, input-output operating system that could be easy to implement and easy to program. So was born the PLC.

Alright, enough history. What I really want to do is show you my PLC. Let's get started.

I'm going to be showing you my Series One Junior Programmable Logic Controller. This device resided on a shelf in my father's shop until I was old enough to understand how to use it. I can remember looking at an 8 pin socket relay and thinking it looked like the power crystal for a spaceship. I'm not big on leisurely reading, but I could read 200 page instruction manuals all day. So that is what I did. I picked up the manual and read it front to back in order to get a general understanding of how to use this thing. Let's go over some basics. 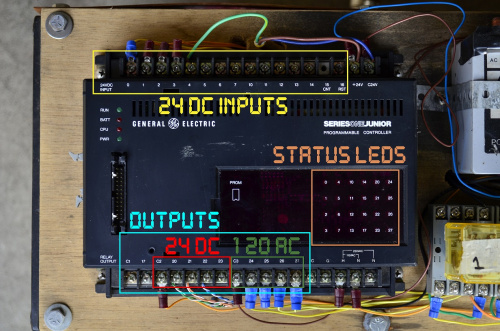 The top row is used for 24 VDC inputs. Lots of industrial equipment uses 24 VDC. The bottom terminals are the outputs, the C_ stands for common. So for example, I have 24 VDC connected to terminal C2. When terminal 20,21,22, or 23 is switched ON, it is supplied with 24 VDC. Similarly, C3 supplies terminals 24-27 with 120 VAC. The status LEDs show which inputs are receiving power and which outputs are switched ON. The H and N in the bottom right are the main power to the controller. Finally, the 26 pin connector on the left is where the keypad plugs in.

How about some specifications?

The keypad is used to program the controller. It allows the user to monitor a specific set of inputs/outputs and shows the current memory location 0-699. 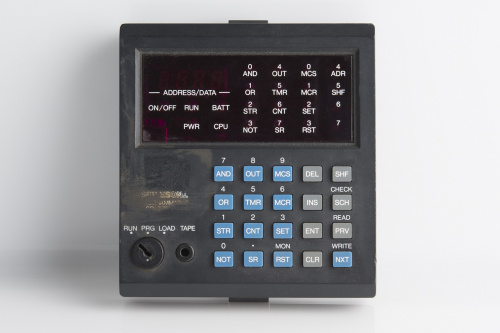 The programming keypad. Looks sort of like a detonator

Pseudocode: If input 4 or output 20 is energized but not input 5, energize output 20.

A simple timing diagram that counts to 35

POWER = false if 15, 16, and 17 are false. The power to the counter must be toggled in order to increment again.

Can you determine what this logic does? Go on, I dare you! Now is your chance to shine. Remember: Numbers 0-16 are inputs, numbers 17-96ish are outputs, numbers 160 through 400ish are internal coils - boolean variables that have no physical output, and numbers 600-620ish are timer coils, they keep time. Annnnnnnnnnnnnddddd GO! 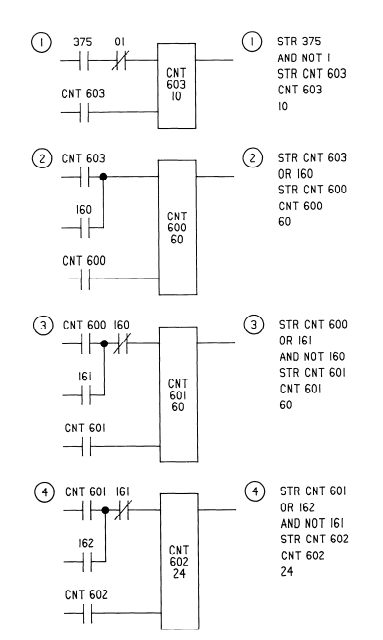 Mystery code. What does it do? No cheating!

Alright so I have this PLC, a bunch of industrial components, what now? Learning how to use the PLC was one challenge, but the real test was actually doing something with it. I already had most of the parts I needed just sitting around, so I built an aluminum can crusher. Because this post is already running into next week, I'm posting the video, the code, and I'm outta here! Post any questions in the comments below. Oh and thanks for reading this far. Unless you skipped to the end, then boo.

Also, this was filmed 4 years ago. I don't like hearing my own voice so I haven't watched it in 2 years. Don't make fun of me, I am a sensy. 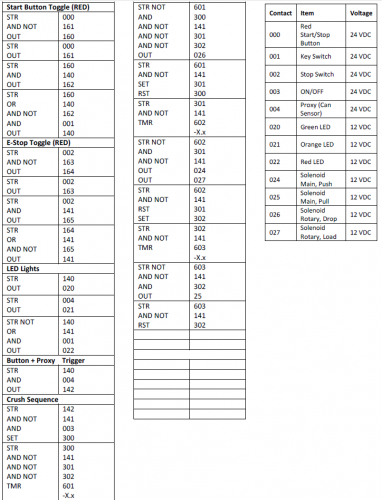 The code/logic for the crusher

Adding Serial Ports to your SAMD21 Board