Enginursday: This Should Be Easy, Right?

-or- Engineering Is Always Yak-Shaving.

The centerpiece of my living room is my old Marantz 2245 stereo receiver. It's heavy, but it sounds good---and looks good, too. It's got a retro-futuristic silver aluminum faceplate, the fancy script "Stereophonic Receiver" logo, the aluminum control knobs, and icy blue panel illumination. 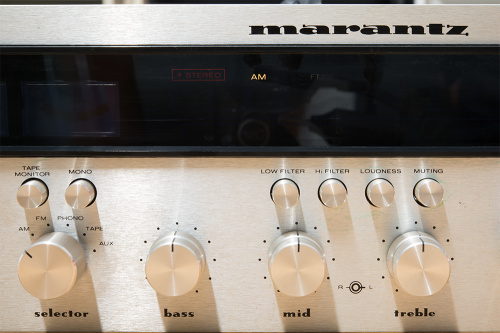 The lonely AM indicator light.

Really futuristic---but that future was growing increasingly dark. The control panel is filled with incandescent lights to illuminate the back of the meters and tuning scale, and indicate the active input. Over the years, those lights went out, one by one. The only light still functional was the AM indicator; it was probably still there because I don't really listen to AM, so it's lived a gentle life.

For ages, there's been a flashlight sitting next to it, so I could peer in and tune the receiver.

The time had come. It needed new lights.

Before I started, I had a handful of goals. I wanted to:

So I dove in and assessed the situation. 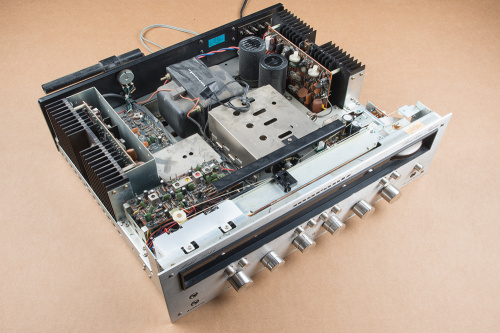 We really don't make electronics like this anymore. There are a dozen circuit boards, each populated with discrete transistors. The chassis is assembled from approximately 30 separate pieces of flanged, drilled and tapped sheet metal.

The bulbs live behind the front panel. The dial lights are in a trough behind the dial, and each mode lamp has its own little cubbyhole, so it won't illuminate its neighbors. There's also a little trapdoor behind the signal strength and FM tuning meters, with two more bulbs. 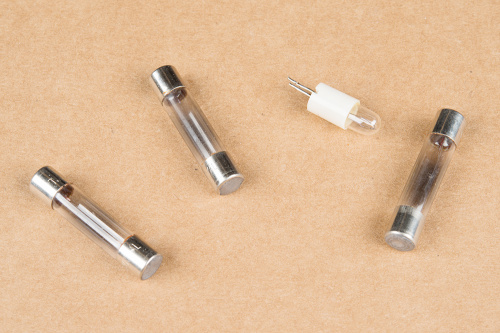 There are two different types of incandescent bulbs inside. The first are in little glass tubes the size of AG3-size fuses. The others are 5mm grain-of-wheat bulbs, of historical interest because the 5mm size (also known as T 1-3/4) was copied by LEDs.

As I was getting deeper into the guts, I was also doing web research. The service manual is available from Audiokarma. It's from the golden age of service manuals, 33 pages long, with a detailed theory-of-operations, calibration and troublechooting procedures, and parts schedule. Page 25 is the complete schematic, a single A3 page. Analyzing the circuit more carefully showed the incandescent bulbs hung on their own secondary of the power transformer. No rectifier or regulator in line---these bulbs are getting 12 volts Alternating Current!

That secondary is a pair of green wires, like the heater secondary on a tube amplifier. They snake their way through the chassis and emerge to run straight to the bulbs behind the tuner scale, then daisy chain to the other bulbs. 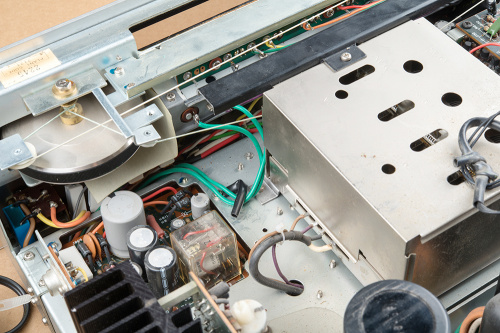 Green wires for the "filament" supply.

I also looked at some websites, watched some videos, and did some component research. The original bulbs are still available, and not expensive, but they don't meet my second criteria.

In researching replacement bulbs, I found an LED replacement for the fuse bulbs from Parts Express and ordered 10 pieces. They have three white LEDs on a little PCB, with caps on the ends to fit in the fuse holders.

I didn't find a suitable replacement for the 5mm bulbs. Again, the size would indicate that a 5mm LED is about right.

But it's never quite that easy.

To simply drop an LED and bias resistor in for each LED wasn't looking like a good option, again in light of criteria #2. Checking specs for white LEDs, they typically have a maximum reverse voltage that's not much higher than the forward voltage, and simply hanging between the 12 VAC lines meant they'd be reverse biased half the time. One datasheet stated a maximum 5V reverse voltage; another said "device is not designed for reverse operation." Exceeding the manufacturer's recommendations is a path to early failure.

A little more careful analysis of the circuit showed that this transformer secondary is used exclusively for the bulbs. So I added a full-wave rectifier and filter cap, turning AC into DC, eliminating the reverse voltage problem without causing problems elsewhere in the unit. The DC bias also keeps the LEDs from flickering.

Having come to the conclusion that reverse bias is a bad idea on white LEDs, I had some concerns about how the replacement fuse bulbs handled the 12 VAC. Before installing them, I did a quick bench test. It turns out they illuminate when they're biased in either direction! There's a little more to the circuit than I was anticipating---I could see there was something under the end caps, so I removed them for a closer look. There are some SOT-23 diodes that form a full-wave diode bridge. The LEDs sit in the center of the bridge, always forward biased, regardless of the polarity of the applied voltage. Clever! 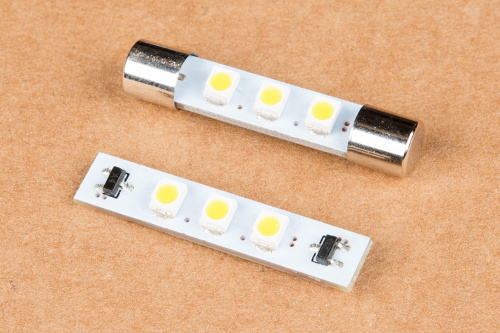 The original fuse bulbs were rated at 200 mA each, and there were seven of them, for a total of 1.4 A. The replacements draw about 40 mA, one-fifth of the original load.

For the grain-of-wheat bulbs, I fashioned replacement assemblies with a 5mm white LED and a 1K Ω resistor, with the leads insulated with heat-shrink tubing. After some experimenting, I found that I needed to roughen the surface of the LEDs with sandpaper, to diffuse the beam a bit. 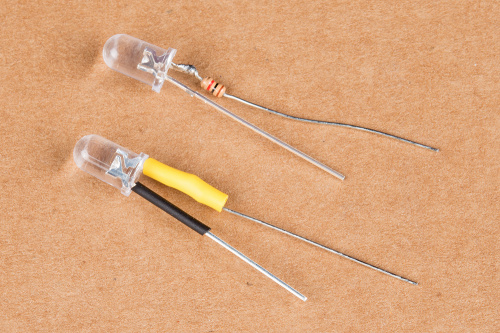 Again, the current draw of the LED replacements is significantly lower than the originals---about 10 mA versus the original 40.

To get my DC, I built a full-wave rectifier with four 1N4004 diodes on a mini solderable breadboard, with a 1.1 Ω series resistor and a 1,000 uF electrolytic filter cap. 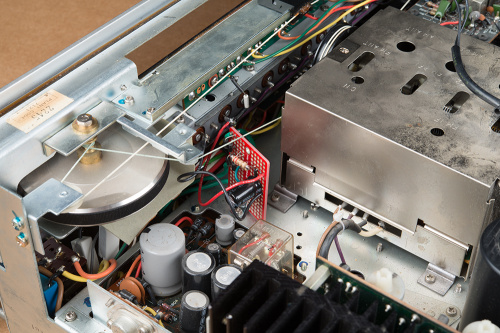 Rectifier board in place.

The board was mounted on an angle bracket, attached to the chassis using the screw that originally held the retainer clip for the green wires.

If you look at the pictures above, you'll notice that the tuning mechanism uses a set of pulleys and string to link the tuning control, the indicator needle, and the wheel on the front of the receiver module. The 5mm bulbs are beneath the middle of that loop of string. Everything I read indicated that it's a serious hassle to have to replace that string, so in keeping with principle #3, respecting the string was a high priority. But I also had to desolder the 5mm bulbs from the PCB almost immediately under the string. 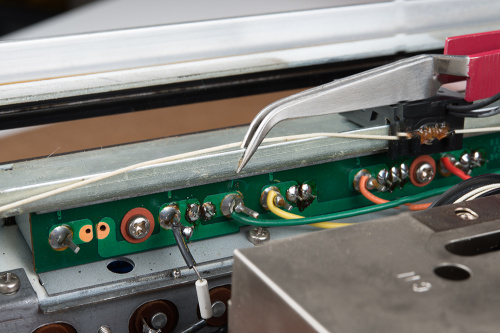 I wound up suspending the string behind the aluminum rail with cross-lock tweezers, leaving clearance for me to reach in with a soldering iron. Desoldering was easier than anticipated, because the lead solder has a lower melting temperature than lead-free. I pulled the 5mm bulbs from the front with small pliers, while heating the solder from the back, then cleaned up the excess solder with some wick.

I had to be a little extra diligent installing the replacement 5mm assemblies, as they are polarized, and they don't all face the same direction.

The fuse bulbs sit in standard fuse holders. They simply pop in and out, not requiring significant force or desoldering, and, as mentioned above, they're not polarized.

I worked carefully, incrementally testing as I went. I think the results speak for themselves. 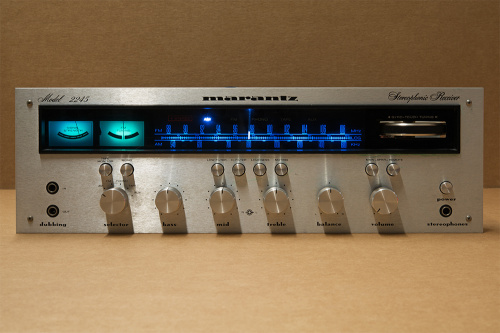 So how did I do at achieving my initial goals?

Hackster Projects of the Month: November 2016