Does It Matter Which Browser You Use?

Web browsers are similar enough to each other that it doesn’t matter which one you use. Or does it?

Web browsers are similar enough to each other that it doesn’t matter which one you use. Or does it? Some browsers don’t display some software applications. Some browser features are hard to live without. The majority of people here at SparkFun express a preference for one browser or another and trends suggest a preference among visitors to our site as well. 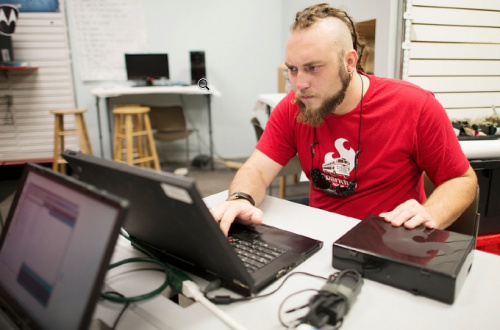 -> "I like Firefox with the EFF’s ‘HTTPS Everywhere’ plugin
because it is fast and secure." Nick Poole, Marcomm<-

-> "I use Chromium (open source Chrome that runs on Linux) because
of features like reopening closed tabs (Shift + Ctrl + T), custom search
engines, and bookmark sync…” – Jason, IT<-

-> “I have to use Chrome at work because it is the only browser that
runs the backend system without glitches.” – Trance, Shipping<-

-> “I use Firefox because I don’t like the way Chrome doesn’t let you
control its self-updates.” – Trevor, Operations<-

Visitors to the SparkFun website also tend to use Chrome (last 90 days): 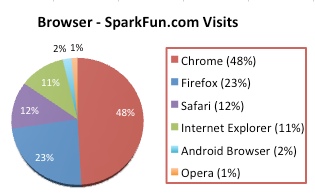 A fair number of people seem to use the browser that came with their computer operating system: Internet Explorer on Windows, Safari on Macs and other iOS devices, Firefox on Linux; however, a larger proportion, and especially technical and creative audiences, have migrated to using Chrome and signing into Google applications no matter their OS.

-> “The [Chrome] hover zoom extension is probably the best browser
extension ever invented (and for a long time there was no Firefox version,
now there is, but it is not as good).” – Chris, IT<-

Engineering is the only department where Windows machines are dominant and Chrome is not the predominant browser. The proportion of employees in each department using Chrome (non-scientific survey) are: Education (75%), Shipping (75%), Distribution (75%), Production (75%), Marcomm (70%), IT (70%), Directors (50%), Engineering (33%).

-> “I use Firefox because I am a creature of habit.” Pete Dokter, Engineering<-

Not surprisingly, visitors to our website resemble our internal engineers in that Windows is the most prevalent operating system (recent 90 Days): 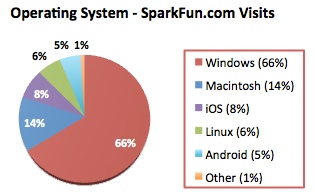 It will be interesting to see if the trend toward Chrome use continues. For a number of years, Firefox had the reputation for sucking up too much CPU and Internet Explorer was for “grandparents” and “virus-y." And although those perceptions have largely passed, many people have not gone back.

Firefox was the most common browser used to view the SparkFun website until February 2012. And it wasn’t until September 2010 that Chrome was used more than Internet Explorer.

-> “I started off with IE, then I used FF for many years, then switched
to Chrome... 2 years ago? I'm not an early adopter by any means but
Chrome doesn't have nearly the security issues that IE does. FF is fine
but Chrome won me over when they put search and the http box into one.”
– Nathan, CEO<-

Perhaps because we come from an open source community, there is a fair amount of backlash against browser dominance (i.e. Chrome, and Google). SparkFun employees recognize that having a variety of choices, including some open source, is the best way to help push the web forward.

-> “I’ve been on Chrome for a while because the development tools
are head and shoulders above everything else, but I am switching
back to Firefox because I like being able to press “/” to search.
And Google sketches me out.” – Brennen, IT<-

-> “I use Firefox because I don’t know if I trust Chrome.” Mike, Engineering<-

A handful of employees cited speed as the reason for their Chrome preference, and the evidence seems to bear this out. The following browsers had the quickest page load time in the past 90 days (I threw in the rendering engine to see if that had some impact on the results - and it doesn't seem to, although this could be because of the different versions in use out there):

What about outside the U.S.? Among the top ten countries that buy from SparkFun, all of them have a greater percentage of people using Chrome than other browsers except Germany and France, with the majority of visitors from those two countries using Firefox.

What is your preferred browser? And why?