Get your captions in for a chance at an exciting prize!

It's time for the January edition of the SparkFun caption contest! The rules are as follows:

Here is your photo: 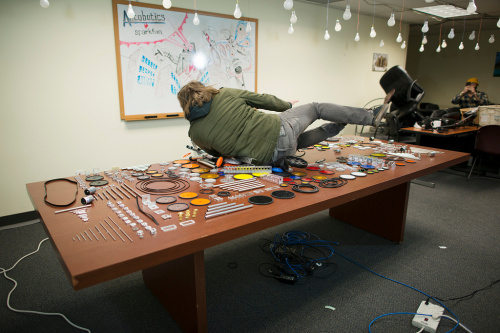 The prize this time around is a special wishlist - "The Kits Kit." This wishlist includes a handful of our favorite SparkFun original kits - namely the new Simon Tilts Kit, the Simon Says PTH Kit, the RedBoard PTH Kit, the ClockIt Kit, the BigTime Watch Kit and - of course - the SparkFun Inventor's Kit. This prize has a retail value of about $240ish...not too shabby!

Update: We have a winner! Member #468914 took home the Kits Kit for their winning caption - "Quickly going over the table of contents." Nice work!